CSOs and State 17: UP Pahinungod and Typhoon Victims in Mindanao

The main characteristic of "civil society organizations" (CSOs) is volunteerism. In contrast, the main characteristic of government and the state is coercion. This makes the two rather a substitute, not complement, for each other.  There are several instances where they collaborate with each other, and that's because government agencies, from local to national, are so many that CSOs and other volunteer individuals have to work with them to minimize duplication of certain functions.

Civil society is a state of society where citizens are mature and responsible enough to run their own lives and that of their communities with minimum coercion, restrictions, regulations and prohibitions. So in cases of calamities for instance, solidarity with the affected people and communities is instant and spontaneous. There is volunteerism in almost everywhere, the willingness to help, without being told or being coerced by a strong force under threats of penalties if no one will help, is there.

Below is an account by a physician from UP, during the UP Pahinungod assistance to victims of typhoon Bophia, locally named "Pablo" by PAGASA. A friend from "Taga UP Diliman ka kung" (TUPDKK), Dr. Elaine Nisperos, shared this in my facebook wall. I like the story, hence reposting it here.

On the night of December 4, 2012 Davao Oriental and Compostela Valley were ravaged by the strong winds of Super typhoon Pablo. In the darkness, families were awakened as the strong winds carried their roofs, and shook their homes. In some areas, flood waters rose without warning while in others, the wet soil gave way and fell upon people’s homes. Glass breaking, walls collapsing, one can only imagine the horrors as the families groped their way in the wet dark night. Parents used their bodies to shield their children from falling debris as moans and cries from helpless victims are heard through the night. The winds were relentless even as the first light of dawn showed a glimpse of roofs flying, branches falling and homes breaking apart. 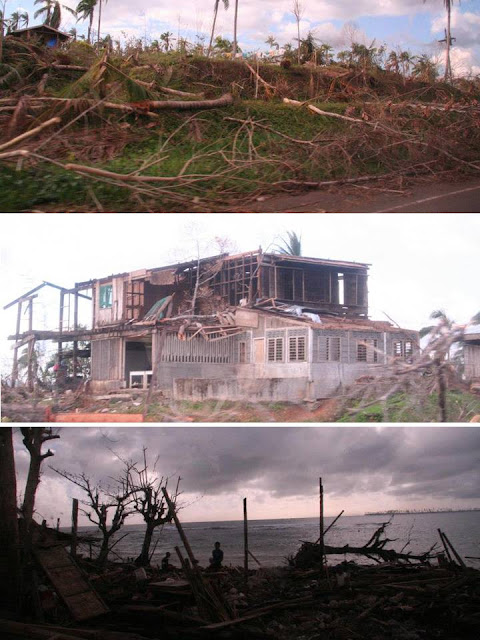 Hundreds perished in those few hours. To those left behind, heartache and despair await.

As news of the devastation reached Manila, my husband, as the director of UP Ugnayan ng Pahinungod (which is Cebuano for “offering”), and chairman of the disaster response of UP Manila, started to mobilize his staff to see how the UP system can extend some help to our countrymen. He is not alone in his altruism. His office was soon deluged with inquiries from the UP Manila Chancellor, UPPGH Director and the UP Padayon Group, as to what they could do to help.

The Ugnayan ng Pahinungod, being the volunteer arm of the UP Manila for various outreach projects (including medical missions), immediately contacted the Local Government Units (LGU) of the affected area. On initial consultation with the Office of the Governor of the Compostela Valley to determine the type of help that UP volunteers can render, nothing specific was determined. To be able to promptly and effectively use the limited resources that the UP System can acquire, a more detailed plan had to be established so, the UP Alumni in Davao were mobilized to give a more accurate view of the situation. Soon, the remote area of San Isidro in Baganga, Davao Oriental was identified.

The task of getting funds for the relief distribution and medical mission did not prove too difficult. On Dec. 6, in a Christmas party of UPCM batch 85, the class decided to donate part of their fund so that UP Pahinungod can immediately set their plans into action. Some batchmates added more money from their own pockets.

Pledges soon came pouring in from both domestic and foreign sources. The problem was it took too long to convert the pledges to cash. The batch 85 donation was instrumental in bringing relief early to the families in the affected area.
A team of 3 doctors, an EMT, an information officer and the mission coordinator (also a dentist) from Manila, met up with UPCM alumni in Davao City. The latter facilitated the search for a place for the team to stay, transportation from Davao City to the affected area and coordination with the locals.

Baganga was allegedly a 6 hour drive from Davao City but with difficult roads, it turned out to be at least 8 hours from the city. As the team travelled to their destination, the devastation revealed itself to them.

Hectares of land, once filled with towering coconut trees that provided a livelihood for the families are reduced to a wasteland of uprooted trees strewn like matchsticks on the ground. Vast banana plantations just recently filled with fruits ready for harvest, are barren now, comically appearing to have had a haircut done by a crazed barber. The beautiful green mountain has been replaced by a big brown mound.

The road although still passable, is filled with pieces of glass, nails and debris from the houses and buildings destroyed by the storm. Many tires have been ripped by this debris, making access to the municipalities difficult. Along the road, families have made make-shift shelters, with materials gathered from their uninhabitable homes.

The school, stadium and the municipal center were in shambles. Even large houses were roofless and most were abandoned. According to the locals, those with relatives elsewhere were gone. Only those with no other option were left to rely on the relief goods and help that outsiders can offer.

The team was housed in a relatively large house owned by a local engineer. They were given two rooms whose roof was spared by the storm. Another volunteer group, Balsa Mindanao, joined them at the house. The latter group was given the living room, dining room, and basement to “camp in” but as rain fell once again on San Isidro, the UP team had to share their space with the Balsa Mindanao group and their soaked belongings.

Ironically, the rain continued but there was not enough usable water. The only source of water was a “sapa” a few minutes away from the house. Bathing was a luxury even the UP team could not afford. 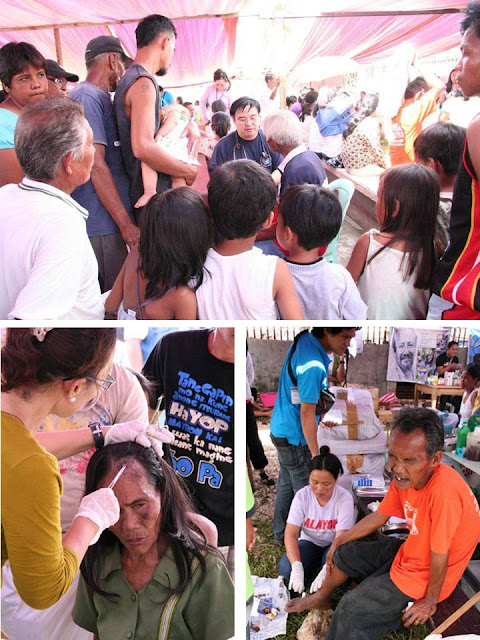 The UP team, brought with them food and drinking water. They had enough for the few days they would be staying but the supply of food in the area is very limited. They have been briefed by their local contacts and the Balsa Mindanao group to resist the urge to give their food to the (once proud) people now begging for some relief from their hunger.

In a lot that has been cleared of debris, tables, benches, and tarpaulins attached to wooden posts were set up to form the clinic. Medical supplies were gathered in tables that served as the “pharmacy”. The UP team worked hand in hand with the Balsa Mindanao group. Patients were seen and treated with their families. The air was heavy with the pain of loss but there were smiles as wounds were treated, and food and medicine were distributed. Before dark, 576 patients were seen and treated by 4 doctors, close to 500 families were given relief goods as well as medical advice. Still, this was not enough.

The families have lost their loved ones, their homes and their source of livelihood. In the midst of this despair, the people need some glimmer of hope. Perhaps when others see their plight, people will reach out to help them. Perhaps, the government will finally get organized and provide them with the basic services that are non-existent at this point. From the initial out pouring of pledges from various sectors, we know that there is no shortage of generosity. If only the donations and relief goods would reach the people that need them the most. 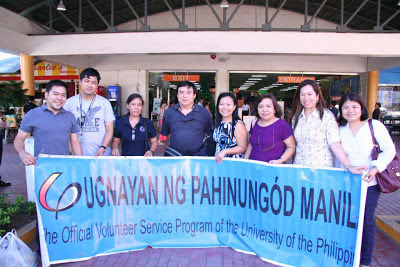 The Ugnayan ng Pahinungod is planning another relief and medical mission to this area on the second week of January. Volunteers and donations are most welcome.
-----------

Posted by Bienvenido Oplas Jr at 10:47 AM