My article on FAT-FREE ECONOMCS | Why we don't need the Kasambahay and Solo Parents bills has attracted a number of comments, I provided some reply to those comments, below. These were made on November 26-28, 2012.
---------- 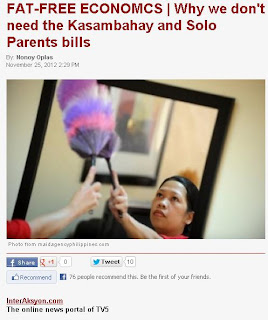 ariaanastacio All I know is that This bill is nothing but helpful. I believe that kasambahays deserve this kind of protection from the law. I really don't see how some people would even think of going against it. I can never imagine it being inefficient and non-beneficial. There's nothing to lose with this bill. So why would people even complain? This bill is a GREAT bill.

Nonoy Oplas · There is a tendency to support legislations that give mandatory welfare, mandatory high wages, mandatory price discounts. It's for the benefit of the target beneficiaries and the poor. But as shown by many rich welfarist countries who provide so many mandatory welfare to domestic helpers, the result is more unemployment. If you combine wages + contributions to PhilHealth, SSS, Pag-IBIG + food and lodging + bonuses and other perks, the cost will not be small. Then only the rich can afford to get a kasambahay and middle class couples who need to work both, one of them must drop from working and take care of the kids and households.

Maria Mababang Loob · UST
As a solo parent myself, I beg to disagree. I have two minor kids still in school and a sick, elderly father to take care of. Although I am "gainfully employed," an assessment made by the local social worker when I applied for a solo parent ID, what I make is hardly enough to pay all the bills, tuition fees plus other school expenses, food, vitamins, and medicines when one of my kids or myself gets sick. As a result, I am neck deep in debt. Actually, what we are lobbying for is not so much the discounts but equal employment opportunities for all solo parents since some (esp private companies) are reluctant to hire solo parents, esp those with 10 yrs old below kids, even when they're qualified. True, not all solo parents in the Phils. are poor but we know for a fact that the majority are. I used to hire a part-time laundrywoman with seven kids, abandoned by her husband, and there are lots more like her out there who need government protection. What needs to be done is a comprehensive survey of all solo parents nationwide wherein the degree of assistance to be given depends on their prevailing situation. And even "rich" solo parents need a program where they can be counseled, guided and assisted to rebuild theirs and their children's lives esp after a devastating separation!

Nonoy Oplas ·
Thanks for the feedback Ms. Loob. It is true that on average, solo parents are more hard up financially than the husband-wife tandem, but forcing private companies to give mandatory discounts even to non-poor solo parents is unfair. If poverty is the problem, then give quality service to the poor, whether they are solo parents or intact husband-wife household, or even for orphans.

Your concern on equal employment opportunity for solo parents is understandable. There is big room for civil society and corporate responsibility, in helping these people, it's not all government responsibility. As the experience in the expanded senior citizens act has shown, the diswelfare to many old people who cannot buy the medicines they need in small but nearby drugstores is possibly larger than the supposed welfare of mandatory discounts they can get.

Diego Salvacion · Works at United Power Construction & development
problems started on the cultural beliefs, there is a mechanism in the existence of life's journey, lots of principles were already explored, people understand already many of the significant & basic existence, there are models of choices in life, but if many will still enforced the wrong model which is not logically fit to the prevailing situation, complex to chaos problems will continue to occur in the society. All regulation should be cyclically connected and should be logically complements all other vital regulations into a whole model choice of equilibrium of life in the society.

Homer Guerrero · Mapúa Institute of Technology
Full time maids are same as everyone. They have the same right as everyone. If people are not willing to give these benefits then hire a part time nanny or a baby sitter or a part time cleaner. Irregardless of maltreatment by employers or incompetent maids, benefits must be given to the full time maids and proper salary. Would you go get a job knowing your benefits are vague? the answer is no. It's simple if one cannot afford then learn to live with no helper. Parents from other countries can cope up raising their kids without full time maids why can't pinoys?

Rowena Ramos ·
It seems our society favors only the poor. how about us who work hard, exercise frugality, honors commitment to married life and make sacrifices to meet the family's necessities?

Das Garcia · Works at Princess Cruises
I agree that we don't need these kinds of bills. at some point, the government should stay out and stop itself from creating an environment that may seem good at first but would eventually bite us in the ass at the end, and besides, not having these bills in congress doesn't mean that the gov't. is abandoning its citizen employed as a house help..if you think of it, we have enough laws to answer relevant issues concerning the kasamabahay's.

Nonoy Oplas · I know of one female employer. They've had several helpers already, the longest who stayed was one year, others stayed only for 2 days, some for 1 or 2 weeks, others for 3-6 months. The motor mouth, the frequent shouting sometimes even in public places, made the previous helpers pack their bags in tears, or in muted desire for revenge. For many helpers, the desire to be treated as a human being, to be respected and be cordially reminded of the mistakes without being publicly shouted at, are a lot more important than all those monetary contributions. It's still the freedom of the helpers to escape or get out of motormouth and insensitive employers that is the best solution. Government cannot legislate people from becoming so mean. Heck, government cannot even catch so many thieves and carnappers, killers and murderers, rapists and kidnappers.

Ken-Lyle R. Rafiñan · University of the Philippines Diliman
The real improvement will come when the administration handles its assets appropriately and governs well so much so that 'kasambahays' need not work as 'kasambahays' but be actually respectfully and gainfully employed.

Does no one else find it weird that the 'yaya' is such a Filipino phenomenon? Ask anyone else in the world who/what a maid is and chances are they'll answer: A Filipino/a. And I don't find that insulting, only telling.

Bigger picture, promote education for one and really just take care of the needs of the people so the poor need not work as maids of the upper and middle class here and abroad and instead aspire to be (and hopefully become) scientists, engineers, lawyers, writers, etc etc.

Anthony James Bautista · · Asian Institute of Management and Entreprenuership I think the bills are not well thought off, even if their intentions are good, they will end up with something far worse. If a study has been made to compare the number of solo parents who are hard up and married parents who are hard-up, I am sure you will probably see little or no difference. Besides, what about married couple who are practically solo, (because their partner is inept) can they benefit from these laws? if not then the law is unfair. It could encourage "live-ins" with a partner, not get married and then claim solo parenthood, even if not true. And it would place undue burden on companies who will then have to increase prices to mitigate the financial effects of such a subsidy law, which might negate the solo parent discount and lower the standard of living for others. These laws mean well, but they will cause more harm.

Xandi Martinez · De La Salle University
While noble in intent, legislation like these always produce unintended consequences. It's unbelievable the extent to which legislators think they can remove the risk in all human interaction. So pricing discrimination is now sanctioned because a segment of society get discounts while others don't. What stops other segments of society to demand from the government the same treatment? Discounts means less profits for the company and less profits by the company means less tax revenue for the government but hey, the consumer/taxpayer/specialty group got a discount out of the kindness of the legislature. More votes in the future and so the cycle continues.

Nonoy Oplas ·
Right Xands. If a drugstore or a clothing company must give mandatory discounts to solo parents, then these companies must jack up their price and the other consumers, who include poor non-solo parents, will have to bear the higher prices of medicines, diapers, baby/toddlers clothing, etc.

Xandi Martinez · De La Salle University
I guess people don't realize that any additional costs, taxes or penalties imposed on an employer/business by the government is always passed to the end consumer. In the end, it will hurt those that it's intended to help because some people might just tough it out and not hire help. And I'm not sure why anyone has to wait for the govt to tell employers how much they should pay helpers. If they feel their helpers need more wages, they can give them a raise.
------------