Web and State 2: FOI Bill and Right of Reply

This is my article today in the online magazine,
http://thelobbyist.biz/index.php/perspectives/less-government/item/131-not-right-of-reply-but-privilege-of-publication
--------- 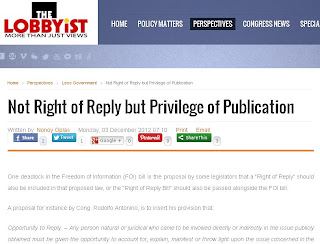 A proposal for instance by Cong. Rodolfo Antonino, is to insert his provision that:

Opportunity to Reply. – Any person natural or juridical who came to be involved directly or indirectly in the issue publicly obtained must be given the opportunity to account for, explain, manifest or throw light upon the issue concerned in the following manner:

(a) That, it shall be in the same space of the printed material, newspapers or magazines, newsletters or publications circulated commercially or for free;

(b) That, it shall be aired over the same program on radio, television, website, or any electronic device as the case may be;

(c) That mandatory explanation on the part of the person natural or juridical who is involved or happened to be involved in the public information obtained shall be published or broadcasted not later than three (3) days;

(d) That the explanation shall be thorough, clear and complete as to shed light on the issue of public concern.

Then he set various penalties and fines for failure to publish or broadcast the reply, like monetary fines of P10,000 to P100,000 for various offenses.

This is wrong. Right of reply is a right for people who would bother to reply to certain unfair accusations against them. But getting published in whatever media outlet, public or private, that the complaining person feels he was unfairly attacked, is a privilege, not a right.

If I attack a particular government official in my blog and say that his ideas are ugly and his face is even uglier, and many people including the concerned official happened to read that particular blog post of mine, the official concerned can write a comment in my blog, fine. Now if he wants me to post another blog article just for his reply, it is my right as blog owner, to post it or not. It is my right, not his. If I decide to post his full reply in my blog, I granted him a privilege, not a right.

Any person can put up a blog, it is very easy to open an account with blogger or wordpress, will take only one or two minutes. So that official can start a blog, if he has none yet, and post anything he wants. Better yet, if he is rich, put up an online newspaper or magazine with colorful lay out and lots of content to attract plenty of online readers. Or he can write a letter to the editor of some big online papers or go to some big radio or tv stations and counter-attack all those who have criticized him, me included.

If I or others that he counter-attacked would decide to publish a rejoinder, I or we can post in our respective blogs and websites, or go to the same online papers, radio and tv stations, and ask that my/our rejoinder be publicized and broadcasted too. Whether the editors or station managers would grant my request or not, it is their right, not mine. If they approve my request, then they have given me a privilege, not a right, to be published in their papers.

When a politician or group of politicians are being attacked for being corrupt and/or lazy, they have the Right of Reply, definitely, but whether their reply will be published in the media outlets that carried such criticism, is a privilege to be granted by the editors and/or owners of those media outlet. It is not a right by the complaining politicians, never.

The complaining politicians have the right to put up their own newspaper or magazine, radio or tv station, or buy shares in existing big media outlets, to regularly carry their personal and official pronouncements, making clarifications to accusations against them made elsewhere.

It would be good actually if ALL legislators, mayors and governors, should have their own websites or blogs at least, where they can post their official statements. These are easy to manage anyway and would require zero or minimal cost to set up. There they can display and publish all their Right of Reply, attacks and counter-attacks, praises and halleluiahs, to whoever will be the object of their anger or praises.

For the legislators who are intent on pursuing the Right of Reply bill to become a law, they should have at least the decency and wisdom of changing the title of their proposal from “Right of Reply” to “Privilege of Publication”, then push their dictatorial intents.

Those legislators are not the owners of the media outlets that they wish to regulate if not control. They are not the ones who pay for the salaries and perks of the reporters, editors and administrative staff, the cost of printing and broadcasting, and there are private property rights in this country. Thus, they should recognize the dictatorial intent of their proposal.

Email ThisBlogThis!Share to TwitterShare to FacebookShare to Pinterest
Labels: FOI bill, freedom of expression, Freedom of Information, right of reply