My elder brother died of prostate C a few years ago, then my mother's first cousin in Cebu. Nationwide, prostate C I think is among the killer diseases for men. My HMO or private health insurance told me once to undergo a test of prostate C as it might be hereditary in our family but I have done it yet. 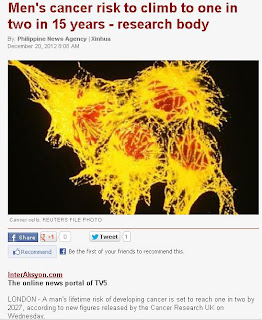 Today, there is a news report from interaksyon.com on men's cancer, that by 2027, the Cancer Research UK foresees that one-half of our gender worldwide will have one form of cancer developing in our body. Not a scary thought for me actually because I will be in the mid 60s by that time. But then any cancer cell can multiply anytime in one's body as one ages and as one's immune system gets weaker.

Here's portion of that news report:

LONDON - A man's lifetime risk of developing cancer is set to reach one in two by 2027, according to new figures released by the Cancer Research UK on Wednesday.

The research body predicted that women's lifetime cancer risk is also increasing and is predicted to rise from 40 to 44 out of every 100 women by 2027.

But it is still optimistic about cancer surviving thanks to better techniques.

"Cancer survival has doubled in the last 40 years thanks to research developing better techniques to detect the disease and improved treatments to increase survival," it said.


"So while the risk of being diagnosed with cancer is rising, the overall chance of surviving it is improving."

It held that age is the biggest risk factor for cancer and the increase in risk is largely due to more people living longer. As our lifespan increases more people will reach an age when they are more likely to be diagnosed with cancer....

Thanks to modern medicine and the life sciences. Human understanding of various diseases keeps improving. Understanding of a disease, how it starts and how it expands, is a prerequisite to developing a treatment, both in lifestyle change and in medication.

In an article this year in BusinessWorld, Medicines in Development for Cancer, Reiner Gloor of PHAP wrote,

Healthy lifestyle like avoiding excessive use of alcohol, tobacco, fatty food and drinks, having a more active rather than sedentary life, is still the best and cheapest defence in preventive healthcare. But should cancer cells or other diseases come in, the use of modern medicines should be tapped whenever possible.

It is important that public policies and government regulations that tend to inhibit or discourage more medicine innovation, more innovative healthcare schemes under a competitive environment, should be avoided. There is money in healthcare, the same way that there is money in education and housing, in food manufacturing, hotels and restaurants, IT and telecomms, and there is even huge money in politics and excessive government spending. Different players in the pharmaceutical, biotechnology, molecular biology and other life sciences will come in when their risk-taking and health innovation will be properly rewarded, not demonized by politics and heavy government regulations like IPR busting and price control.


Many cancers can be prevented and cured

Cancer is one of the major noncommunicable diseases (NCDs) that will be given global attention when the United Nations General Assembly convenes for a High-level Summit in September. It is a leading cause of death worldwide which claimed more than 7.5 million lives in 2008. It is projected that it will continue to rise with an estimated 12 million deaths in 2030, a situation which could be a crucial concern.

Cancer knows no boundaries. Rich or poor, young or old, men or women. However, the burden for low- and middle-income countries is growing with more than 70% of the reported deaths occurring in them in 2008. Low- and middle-income countries also stand to be hardest hit by consequences of other major NCDs such as chronic respiratory diseases, diabetes, and cardiovascular diseases. A UN report explained that in developing countries, noncommunicable diseases and their risk factors worsen poverty, while poverty results in rising rates of such diseases.

In the interest of space, this column will discuss cancer in general as there could be more than a hundred types of cancer. This is due to the fact that cancer, also referred to as malignant tumor or neoplasm, can affect any part of the body. It arises from a single cell but transforms and progresses into malignant tumors.


The Philippine Cancer Society explained that cells grow, divide, and produce more cells as needed to keep the body healthy and functioning properly. However, the process goes wrong sometimes and cells become abnormal, forming more cells in an uncontrolled way. The extra cells form a mass of tissue, called a growth or tumor, which can be benign or malignant, meaning cancerous.

The World Health Organization (WHO) noted that “metastasis” is a defining feature of cancer. It is a process referring to the rapid creation of abnormal cells that grow beyond their usual boundaries, and which can then invade adjoining parts of the body and spread to other organs.

Aging is also a factor for the development of cancer. Other risk factors include smoking, alcohol, unhealthy diet, and chronic infections from hepatitis B virus, hepatitis C virus and some types of human papilloma virus (HPV).

According to the report, lung cancer is the most common cancer in men and the third most common in women. It added that four out of 100 men and one out of 100 women in the country would have had a likelihood of developing lung cancer before reaching the age 75. In 2010, the same report said that 6,987 men and 2,197 women succumbed to lung cancer.

Meanwhile, breast cancer is the leading cause of cancer deaths among Filipino women while cervical cancer ranked second. Colorectal cancers, on the other hand, is the third most common cancer in the Philippines.

On the brighter side, more than 30% of cancer can be prevented by avoiding risk factors such as tobacco use, obesity, unhealthy diet, low fruit and vegetable intake, physical inactivity, alcohol use, sexually transmitted HPV infection and air pollution, among others.

The WHO also said that cancer mortality can be reduced if cases are detected and treated early. Early detection means knowing early signs and symptoms to facilitate diagnosis and treatment before the disease progresses. Cancer screening, on the other hand, aims to identify individuals with abnormalities suggestive of a specific cancer or pre-cancer and refer them promptly for diagnosis and treatment. (For more information on cancer, go to www.who.int/cancer/en/).

The pharmaceutical industry, through the International Federation of Pharmaceutical Manufacturers & Associations, will present a 10-point Framework for Action on NCDs as key stakeholder and subject matter expert during the High-Level Summit next month.
-------------