This is my article yesterday in TV5's news portal,
http://www.interaksyon.com/business/49935/fat-free-economics--institutions-and-why-governments-fail
--------------- 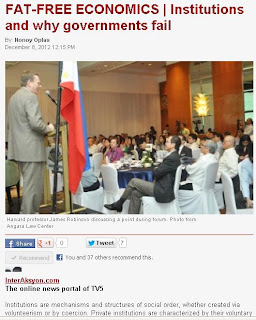 In most public discourse, institutions often refer to those in the public sector because they prescribe certain behaviors of the people through various regulations, and they are sustained via taxation and other mandatory fees and contributions to the government.

When institutions are weak, they do not function properly. They or the officials that lead them do not enforce certain rules and regulations that they are mandated to do. Rather, they exercise certain arbitrary powers and allow exemptions as to whom the rules and penalties will apply and to whom the rules can not apply.

In their book “Why Nations Fail" (published 2012, 529 pages), Daron Acemoglu, an economist from MIT, and James Robinson, a political scientist from Harvard University, argue that nations can fail if they have more “extractive” rather than “inclusive” economic and political institutions.

These points were discussed extensively by one of the authors, James Robinson, in a conference on December 5 at Mandarin Oriental Hotel jointly sponsored by the Angara Center for Law and Economics and the World Bank.

I agree with the Robinson's analysis that the main function of government is to promulgate the rule of law and protect property rights. And that is where the Philippines and other governments fail. They do not strictly promulgate the rule of law. Rather, there is more rule of men, deciding to whom the law and prohibitions will apply and to whom they do not apply. So it is more of government failure, not national failure. And the question is, why governments fail.

Examples are the protection of shops and malls, hotels and buildings, schools and universities, airports and seaports, ordinary individuals and so on, are done mainly by private security agencies, not government police and armed units. The police and other agencies are generally corrupt that people and businesses distrust their capacity to protect the citizens and their properties, so they get private security agencies to protect themselves and their properties. They turn only to the police after a crime has happened for legal cases later. But the crime prevention function is done mainly by the private sector.

In the current global and regional public finance condition, almost all governments have dis-savings and are heavily indebted. The public debt-to-GDP ratio can range from 20 to 200-plus percent. Yet many economies have positive savings rates, meaning their savings-to-GDP ratio is positive - from about 14 to 50 percent among Asian governments alone. This is another example that savings and efficiency in the private sector is compensating for dis-savings, waste and inefficiency in the public sector.

It is a bankrupt idea that more power should be given to governments (local, national and multilateral) and people should work and pray that "enlightened and good" leaders will wield such powers to do central planning and redistribute wealth, regulate and regulate, tax through "inclusive institutions". And when thieves and dictators grab government authority, people should rally and mobilize again to replace and topple them. Then gamble again that the next round of leaders are not thieves and dictators. This is precisely the experience of the Philippines and many countries for many decades now.

People are not idiots that government, whether ruled by thieves or angels, should nanny them from education to healthcare, housing, transportation, agriculture, condoms and so on.

One of the discussants in the forum, Dr.Bernie Villegas of the University of Asia and the Pacific made a correct position during the roundtable that the PNoy administration should focus its last three years on building or strengthening public institutions - the courts, the legislature, and various bureaucracies - to become "inclusive" and protective of law and order, protective of property rights. But he stopped there.

For the government to focus on that very important thrust, it should stop creating new welfarist programs, step back and focus its resources on improving existing programs, or even abolish those programs that were more of debt generators than productivity enhancers.

The free market, more personal responsibility - as opposed to more and bigger government - still has a long way to go in this country and elsewhere. There are just too many central planners around us who endlessly produce “great ideas” and they seriously think that their bright ideas should be forced on the rest of society, and taxpayers should finance their grand ideas endlessly.

It is this central planning mindset - of more forced collectivism and coercion in society - that causes conflict among people. We should have less coercion in society. It is good that people have lots of “bright ideas” but such ideas need not be forced and slammed on everyone else. Rather, bright ideas can survive and thrive via voluntary exchange and civil society volunteerism.
---------