The pro-Reproductive Health (RH) bill camp has issued a public challenge today, nice press release, see below. One of my friends in facebook,, Louie Montemar, posted it in his wall. I replied with the following points.

I want to join the debate. Here are my questions:


1. Condoms lang, we need legislation pa?
2. Asking the OB professionals to render services to the poor for free, we need coercion and legislation pa? 3. DOH will spend P2.5 B for various RH services in its 2013 budget, so it is being done already even without new legislation, why do we need more coercion and more legislation?
4. There is an impending big typhoon coming to the country by tomorrow, to hit Mindanao and the Visayas  There is no "Solidarity during flooding bill" or law, and yet people are helping their fellowmen on their own even without coercion and legislation, so why more coercion and legislation?
5. With about P300 B per year budget deficit (expenditures larger than revenues), this is not enough. Govt must over-spend further, over-borrow further with new programs like cash transfer for the poor and condoms for the poor, while maintaining old programs?

As I argued before, I believe that this bill will become a law soon. There are just too many academics, media people, NGO leaders, etc. who are pushing for government expansion in population issue.

Then one of the statement signatories, Dr. Antonio "Tonton" Contreras of DLSU Political Science Department, invited me to join the debate. I immediately said Yes. I told them that they cannot expect me to argue the Church position because I have zero sympathy with their argument. He said their position does not mention the church position as well. That's good.   Let us make the church position irrelevant in this debate.

I also suggested that they reformulate some points into questions that are answerable by Yes or No, so that a black and white position can clearly be established. Fori nstance, one question will be:

Do we need new legislation for all these RH services and arguments? Why or why not?

I also asked them who are those anti-RH debaters they have tangled with in the past, but were cowards to share their presentation publicly. I think these are lousy debaters and I despise cowards. If people should debate publicly, they should open up their data and arguments to public scrutiny.

On another note, I attended last week the two-days Federation of ASEAN Economic Associations (FAEA) 37th annual conference at the PICC. In a keynote address, Dr. Charles Horioka of Osaka University presented a paper, “The Determinants and Long-Term Projections of Savings Rate in Developing Asia”. Their economic regression showed that domestic saving rates in developing Asia are determined primarily by the age structure of the population (negative effect, especially the aged dependency ratio),  the level of per capita GDP (positive effect), and the degree of financial sector development (also positive effect).

So, having a less-ageing population is positive news as there are more young people who can produce more wealth – as entrepreneurs, as workers, as traders – and support the young and the aged section of the total population. This table below is interesting. 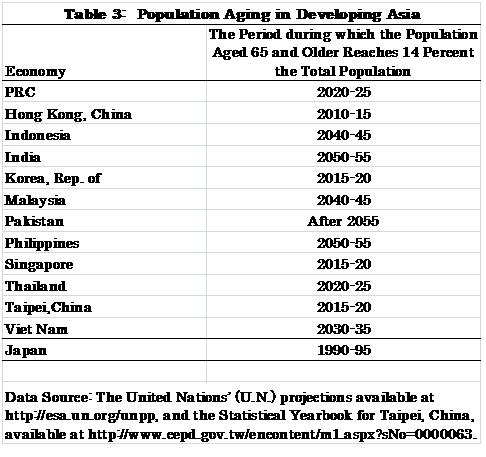 During the open forum, I spoke and commented that with savings rate in Asia  ranging from 10 to about 50 percent of GDP, these are still savings whereas almost all governments in Asia (and elsewhere) have dissavings with their high public debt. In effect, private savings have compensated for government dissavings and fiscal irresponsibility and over-borrowing, resulting in a positive net savings. Dr. Horioka agreed with my observation.

Below is the challenge by the pro-RH camp. But first here's an "appetizer".
I posted the initial draft of this blog post in Louie's wall where Tonton also commented, then one of the supposed great debaters of the pro-RH camp, Dr. Sylvia Claudio, Director of the Center for Women Studies at UP CSWCD made this interesting remark:

Antonio P. Contreras Nonoy Oplas I have answered in yet another exchange. His defense is that I have not answered him no matter how to the point my data and studies are. One of those who should actually seek counsel---and I don't mean from lawyers.

To which I replied:

Sylvia, are you sure you are part of the pro-RH debate team? A quick ad hominem attack? Lousy and pathetic. Show your wares and data here. Too limiting to debate on twitter. Do it now.I will edit my blog post and include your comment, just one proof how lousy to debate some of the pro-RH ideologues are.
----------

STOP MISLEADING OUR PEOPLE
FACE US OR CONCEDE: PRO-RH ACADEMICS CHALLENGE
ANTI-RH LAWMAKERS AND THEIR SUPPORTERS TO A FINAL DEBATE
The scientific debate over the necessity for reproductive health has been over for decades. Similarly, in over a decade of advocacy for an RH Bill, all relevant questions about it have already been raised and responded to using data-based and science-driven arguments.
Hundreds in the academic community have repeatedly called for the passage of the RH bill through:

• statements of support from hundreds of faculty members of various disciplines and universities
• release of evidence-based research on various RH issues to media and public
• provision of technical support for RH authors
• organizing public fora.

Our people have listened and already have been persuaded.
For instance, several surveys have consistently shown that Filipinos have made up their minds on the RH Bill, with the majority, including Catholics, supporting its immediate passage.

Yet, some persistent oppositors -- Anti-RH Legislators, academics and allied groups -- remain wrapped up in their centuries-old anti-women beliefs and rehashed arguments against the RH Bill based on fringe (a.k.a voodoo) science, outdated studies, and people who lack the relevant expertise on the subject. In their efforts to block the passage of the RH Bill, they continue to display lack of appreciation and understanding of existing laws, science as well as women and human rights. They remain determined to introduce a slew of amendments based on questionable or even absurd arguments meant to undermine the integrity of the proposed measure.

Pro-RH academics, have seen all sorts of fallacies and intellectual dishonesty on the part of anti-RH, even the academics among them. We have seen them reject the findings of the leading and recognized scientific bodies. We have seen lawyers talk the side effects of contraceptives and economists talk about cultural studies. We have heard doctors say they would prioritize what the Church says about contraceptives instead of the World Health Organization. We have seen scientific studies misquoted, expert opinions twisted.

We have seen oppositors refuse to respond when confronted with the hard facts and refuse to change their claims in the light of our presentation of those facts. Requests for copies of their presentations have been rejected even when they are asked by the neutral organizers of the symposium or forum. But mostly, they have refused to face us in any format that would allow for the comparison of data and confrontation of analyses and opinions.

Such shenanigans would be laughable perhaps even expected, in academia where both the brilliant and the wacky find refuge. But it becomes despicable when this pseudo-science is used by lawmakers to hide the fact that they do not base their policy-making on the best data and analyses available.

In order to take away the last shred of legitimacy that these lawmakers have, we challenge them or any of their champions to a well-conducted debate. Not your speeches in the halls of Congress where you hold immunity and no one can confront you with the facts. Not in forums and symposia where you can run on and on with your untruths and there is no real exchange.

We urge you: face us or concede!

We propose the following mechanics.
1) The pro-RH side will be organized by the UP Center for Women's Studies and the UP Institute of Human Rights. Any anti-RH academic institution may choose to co-organize.

2) We have asked the media organization Rappler to conduct the debate and make it available to the public.

4) We suggest the following talking points:
Medical:
• None of the contraceptive methods mandated by the RH bill are abortifacients.
Economics/Funding/LGU mandate
• Public funding for contraceptives and other supplies is not just affordable but also efficient and cost-effective and result in economic benefits for the country in the medium- to long-run
• We cannot reduce maternal mortality without giving women access to a full range of modern contraceptives.
• RH law will promote social justice and help in enhancing human development for all.

Constitutionality, Ethics and Culture
• The RH bill, to include the provision on comprehensive adolescent sexuality education, is constitutional, ethical and is culturally accepted and pro-family.
• Sexuality education will not make students sexually promiscuous but enable them to become more aware and cautious about the consequences of early and unplanned pregnancies.

• The RH bill upholds women's rights
5) This is an open challenge that we issue, thus we will not set a date for the debate. We, however, do set the conditions that we wish to debate with lawmakers, the main spokespersons of the anti-RH movement and/or other academics.
-----------

I think your strongest and BEST argument is the critique on cost and benefits and its contribution to overall budget deficit.

in all of the arguments/opeds, etc, i've never read anyone write anything about costs of implementation. I can only hope the makers of the law incorporated budget projections.

I think you are 100% right about asking about where the budgetary support comes from.

but this is an argument against ALL laws in the philippines, not just the RH bill.

if its only a matter of money, then i'd expect that the counterargument would be to reduce other kinds of spending.