* This is my article yesterday in TV5's news portal,
http://www.interaksyon.com/business/50817/fat-free-economics--why-a-rise-in-unemployment-rate-is-not-exactly-bad
----------- 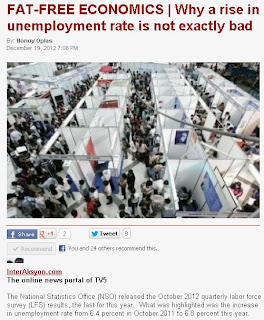 The National Statistics Office (NSO) released the October 2012 quarterly labor force survey (LFS) results, the last for this year.  What was highlighted was the increase in unemployment rate from 6.4 percent in October 2011 to 6.8 percent this year.

This did not conform with the high economic growth in the third quarter, when the Philippines' gross domestic product (GDP) grew a surprising 7.1 percent, the second highest in Asia. If growth was high, it means that there were lots of economic activities that occurred over the last quarter and hence, more jobs must have been created, whether temporary or permanent. So what went wrong?

In the table below are the numbers over the past three years. We show both the actual numbers and percentages. Take note that in the fifth column, the increase or decrease in absolute numbers from October 2011 to October 2012. 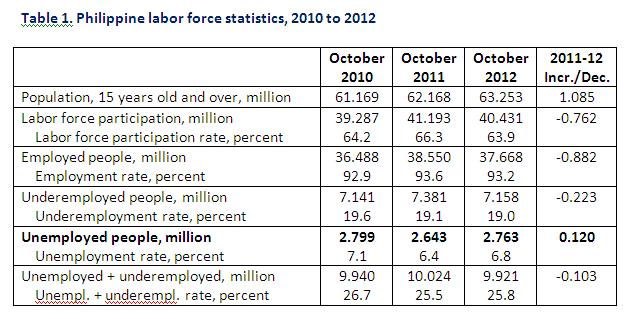 Here are the notable points:

a) There were 1.08 million new Filipinos who entered the labor force, whether looking for work, already working, or still studying.

c) Employed people - whether employers, employees, self-employed or unpaid - declined by 0.88 million.  And whether fully employed or underemployed, which is a bit worrying.

e) Unemployed people increased by 0.12 million. We will have a longer discussion of the term “unemployed” below.

The NSO has defined the unemployed people as: “persons who are 15 years and over as of their last birthday and are reported as: (1) without work and currently available for work and seeking work; or (2) without work and currently available for work but not seeking work for the following reasons: ( a) Tired/believed no work available, (b)  Awaiting results of previous job application, (c) Temporary illness/disability, (d) Bad weather, (e) Waiting for rehire/job recall.”

This does not easily conform with the layman definition of an unemployed as someone who is “seeking work but is not hired”, as the above definition includes people who are “not seeking work” because of the five reasons given. Which means that many of the unemployed are people who generally have chosen to be unemployed temporarily. Someone who is offered to work at say, P30,000 per month gross pay has chosen to be unemployed temporarily because he is awaiting possible employment in another company that will give him P40,000 or higher per month in gross pay.

In this case, to be “unemployed” is not exactly a bad situation. It is “unemployment by choice” and not due to structural problems in the economy.

It is highly probable that many Filipinos have opted to be unemployed temporarily, say at the time the survey was conducted because they were awaiting job placement or hiring abroad. They want to be ready to leave any day without the hassle of seeking management permission to resign, get office clearance and related burdens.

The figures for OFW remittances seem to conform with this hypothesis: $19.24 billion in 2009, $20.74 billion in 2010, $22.35 billion in 2011, and projected to reach $24-plus billion this year. There is  generally higher pay abroad than here, despite the continued appreciation of the peso relative to the US dollar and other major currencies.

In short, a higher “reservation wage” abroad or here - as a result of anticipated faster economic growth and more business activities - is among the reasons why many Filipinos have opted to be temporarily unemployed. An increase in unemployment rate from 6.4 to 6.8 percent does not appear to be bad after all.
-------------