* Notes: (1) This is my article today in the online magazine,
http://thelobbyist.biz/index.php/perspectives/less-government/item/137-up-lantern-parade
(2) Photos below are not part of the original article. First group of photos I got from interaksyon.com, the second group from gma news.
------------ 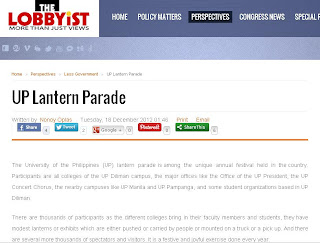 The University of the Philippines (UP) lantern parade is among the unique annual festival held in the country. Participants are all colleges of the UP Diliman campus, the major offices like the Office of the UP President, the UP Concert Chorus, the nearby campuses like UP Manila and UP Pampanga, and some student organizations based in UP Diliman.

There are thousands of participants as the different colleges bring in their faculty members and students, they have modest lanterns or exhibits which are either pushed or carried by people or mounted on a truck or a pick up. And there are several more thousands of spectators and visitors. It is a festive and joyful exercise done every year.

Last Friday night, December 14, I attended the parade, after more than a decade of missing it. I brought my  family and even my two young girls appreciated the various lanterns and the festivities. We sat at the Palma Hall steps where parade participants show off their wares and talents.

The most impressive lanterns for me are the following.

First, the UP College of Fine Arts (CFA). This group is a hands down winner each year in the parade competition. Since last year I think, they have been “disallowed” in the prize category because no one, not a single college can put up a serious competition to them. But they are given a special award or citation for their endless and non-tiring effort at entertaining the public. This year, they have a long parade of various lanterns, ranging from scary characters like a monster cockroach and monster “”aliens”, to children characters like tinker bell and forest fairies, to airplanes and different fishes, large and small. The CFA guys are really cool. Their annual participation is almost always the “highlight” of the UP lantern parade. 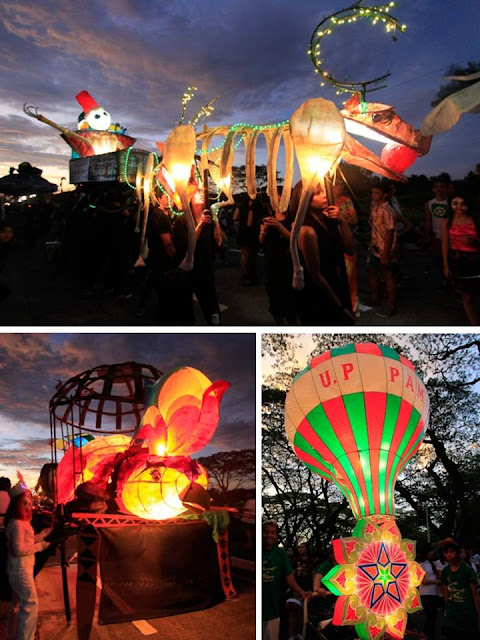 Second, the UP College of Human Kinetics (CHK). The participation and exhibition by the world famous UP Pep Squad was really awesome. Beautiful young men and women performing high acrobatics like throwing three girls high up in the air, the girls make 2 or 3 somersaults before landing on their back in the arms of 4 boys catching them. Even my two young girls were speechless at those acrobatic performance. The college also paraded the various UP sports teams – swimmers, divers, rowers, others.

Third, the UP College of Engineering (CE). For one, they have the most number of participants, hundreds of students from the different departments (Chemical, Industrial, Civil, Mining, etc.) participated and have their respective lanterns. One department showed a transformer mounted on a truck: an innocent-looking jeepney that later transformed into a giant robot standing high in a ready to fight stance, fascinating. 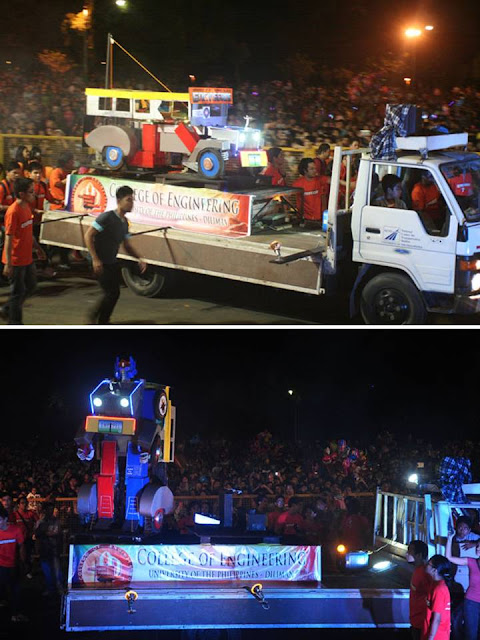 Fourth, the UP Babaylan. This is an organization of gays, lesbians, transgenders. Their costume was fantastic, some in two-piece attire. One participant looked like a real woman. They are cool and are very open about their chosen gender.

My college, the UP School of Economics (UPSE) also participated, the Dean and some faculty members were there, plus school administration staff and many students. They brought a replica of a bull mounted on a truck, to represent the bullish picture of the economy.

Now the lousy participants. I say lousy because there were indeed a bore.

First, the League of Filipino Students (LFS) and other activist groups. They held a mini-rally in front of ordinary audience and spectators, chanted the usual “Imperyalismo ibagsak, burukrata kapitalismo ibagsak, pyudalismo ibagsak” and the usual “Down with the Aquino-US regime” poster. I was a typical UP student activist too in the 80s, and chanting those slogans appeared somehow “relevant” in the 80s with Marcos still our President. I was amazed that nearly three decades have passed, the sloganeering of the student activists have not changed a bit. I graduated from UPSE with many if not all of us submitting our undergrad thesis written in a manual typewriter. There were no cell phones, not even pagers and beepers that time. Now gadgets are so modern, college students do not even know what a typewriter or a pager looks like.

These activists also held their mini rally for about 20 minutes or more, thereby preventing the parade to move on faster. The UP Babaylan and the CFA were among those held up by the boorish activists.

Second, the Aurora rallyists opposing the APECO project in the province. I sympathize with their demands, but holding also a mini-rally for several minutes at the lantern parade, is plain political opportunism. Holding rallies in many cities and later in Malacanang, in front of dozens of tv cameras and media people were not enough, they have to hold another rally in a Christmas festivity in UP.

There were other activist groups that also joined the parade, with their respective demands like “secure housing in UP” for non-UP related settlers, wow.

Such is the UP lantern parade. It attracts the most creative minds in UP like those from the CFA and CHK in showing off their creativity and talent. But it also attracts mediocre minds to hostage a festive mood for their political sloganeering and campaigns.

I hope that these political opportunists would have some sense of respect for the spectators and visitors. They can join the parade as no one seems to be banned or prohibited from participating in the lantern parade, but they can minimize the mediocre exhibition by minimizing the time they bore the ordinary spectators.

Email ThisBlogThis!Share to TwitterShare to FacebookShare to Pinterest
Labels: College of Fine Arts, lantern parade, University of the Philippines, UP Pep Squad