I am here in Puerto Princesa City, the provincial capital of Palawan province. I joined a small group of people brought to Rio Tuba Nickel Mining Corporation (RTNMC) by Jose Bayani "JB" Baylon last Friday. JB is a friend and a classmate in one or two subjects in UP Diliman undergrad in the 80s, He is now one of the VPs of Nickel Asia Corporation (NAC), a Filipino-Japanese corporation based in Manila, that owns RTNMC and six other nickel mining and processing firms in the country.

So last Friday whole day, we were in RTNMC, a big bararangay in the southernmost Bataraza municipality, Palawan. This is about six hours by bus, and five hours by car, 260 kilometers, from Puerto Princesa. Yesterday, we went to Puerto Princesa, and this afternoon will fly back to Manila.

I joined JB's team because I have heard, read, and saw powerpoint presentations about "responsible mining" but have not actually seen one. So the opportunity came, I grabbed it. 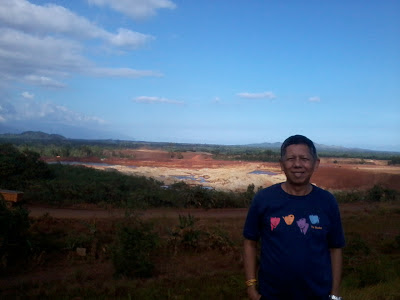 Total mining claim of RTNMC is 5,265 hectares covering 11 of 22 barangays of Bataraza town. After 38 years in operation (actual nickel operation started in 1975), the company has mined only 658 hectares but only about 25 hectares are actively being mined and quarried every year. The other mined out areas? They have been rehabilitated and covered with trees again. More of that later.

Among my interests is how a mining company contains those ugly and unsightly "mine tailings" that spill into rivers and the sea downstream. We were brought to this abandoned, "mission accomplished" mine tailings area. This is where another NAC subsidiary and sister corporation of RTNMC, the Coral Bay Nickel Corporation (CBNC), engaged in the manufacture and export of nickel /cobalt mixed sulfide materials, dumps its mine tailings. 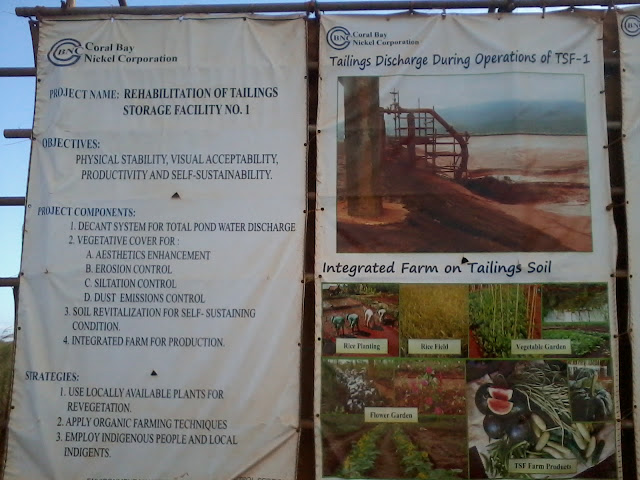 When those tailings were still fresh, they looked like thick reddish blood of a monster or other giant animals, contained in an area by thick walls of soil and rocks up there, right beside the active mined areas, so they did not spill into creeks and then to Rio Tuba River, and ultimately into the Sulu Sea. 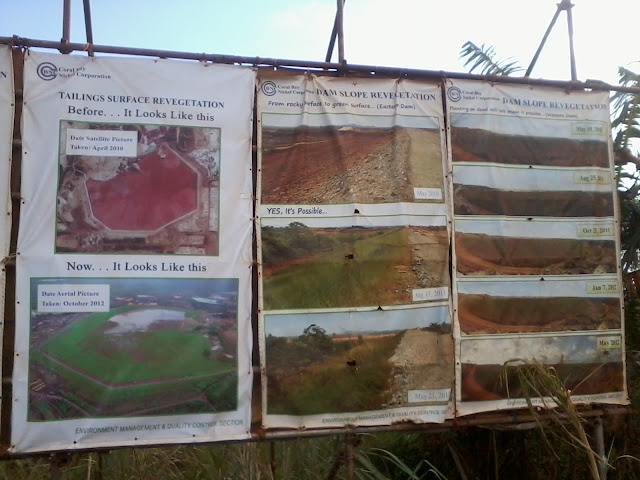 These dried tailings now look like this. Huge blocks of hardened red soil, not as soft as ordinary soil, but neither as hard as rocks. Even if they have dried up and solidified already, the thick walls of enclosure around them were retained and not removed, until now. I went down about 1.5 meters from where we were standing, where our service vehicles were parked, to this area.

Those unsightly cogons and other grass varieties now grow on these dried tailings. In some areas, various tree species just grew naturally, not planted by man. But for faster transformation from an ugly mine tailings area into productive agri land, the company put thick layers of ordinary soil on them. Several hundred trips of huge trucks carrying ordinary soil to be devoted here. 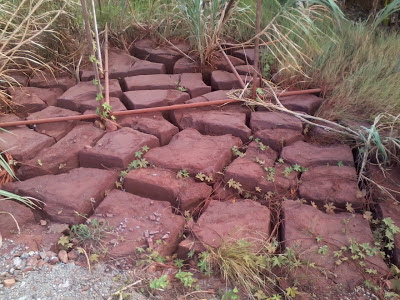 Ok, that was the past and abandoned mine tailings pond. Below is a new silt containment pond. Below this water and small lake, are mine tailings, not far from the old one shown above. There are several rows and layers of filters to allow only water but not the semi-solid tailings to pass through and go to the nearby creek. I saw several layers of vetiver grass on box-type metal cages as the frontline filters. 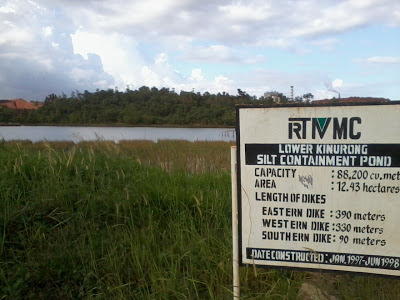 Then three rows of charcoal + rocks per row filter system. Now what if the pond overflows, say after heavy rains, the tailings and silt won't go down too? I think only the overflowing water would go down, the tailings that settled would remain on the pond's bed. I like their multi-layer, multi-rows filter system, cool. 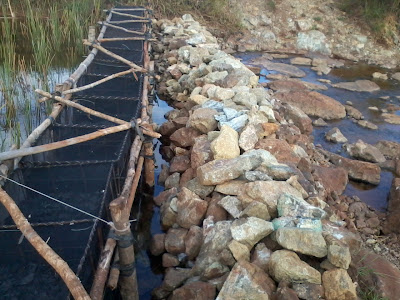 Then we went to the port area of Sulu Sea, near where the barges wait for the loading trucks, and those barges would bring the mineral rocks and soil to the waiting big ships. The latter cannot go near the shore, their hulls will hit the shallow sea bed as they carry several hundred tons of those materials. 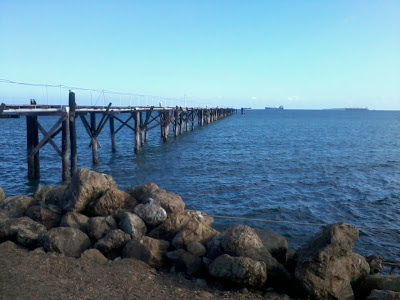 More views of the shore. The ships that will bring those raw mineral products to Japan or China look small here, they are really far from the shoreline. Beside the rocks, no reddish or brownish or other mining materials and substances alien to the sea water. 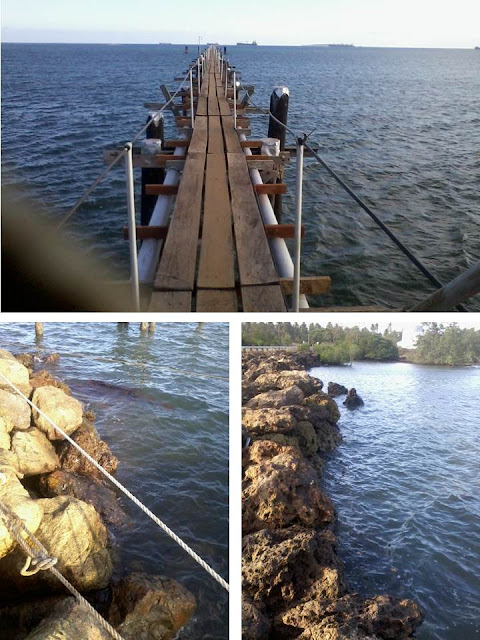 Part of our trip upland was meeting the indigenous people (IPs) who are employed by RTNMC. They are unlike the Aetas, Mangyans, other IPs with small and short body frames. Physically they are lke ordinary Filipinos, except that their body are really strong and do not complain working under the Sun, planting many trees and vegetables. 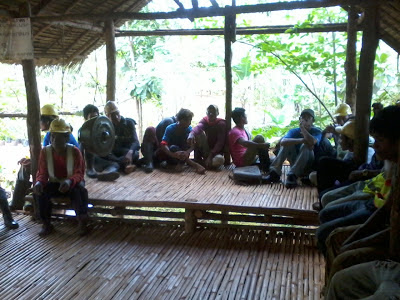 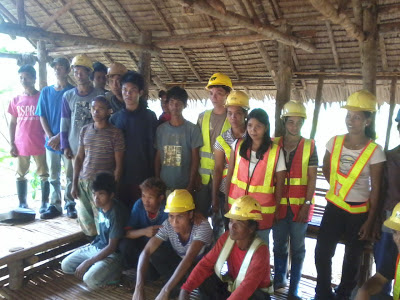 These are the guys who helped convert a mined out, barren area into a thick forest land -- in just 12 to 18 months. I got this photo from facebook, not from my camera phone. Big credit goes to Dr. Bibiano Reyes, the head of the Mining Rehabilitation and Reforestation Unit of RTNMC. He is a UPLB Forestry graduate, worked for the DENR's Forest Management Bureau for many years. When he retired, he joined RTNMC. From a government official with dozens and dozens of personnel and forestry scientists under him, to supervising IPs, it was a big shift in forestry work for him. But his output are much much clear and concrete compared to someone desk-bound and signing papers, attending seminars and conferences. 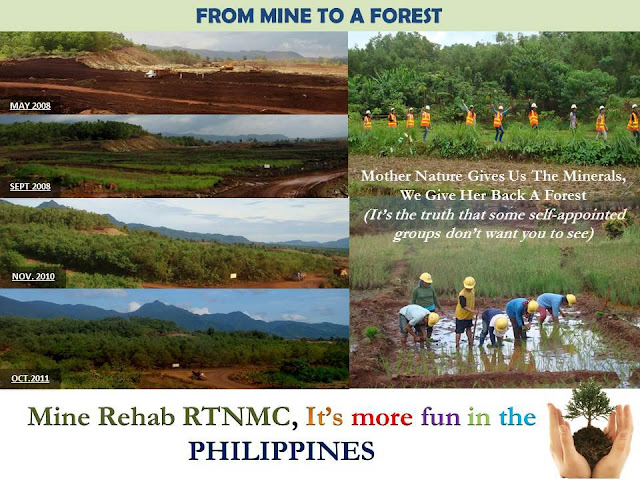 Rice, vegetables, tilapia fishpond -- on top of previously barren, mined out areas. That is why out of a huge mining claim area, only a small area is the open pit mining. 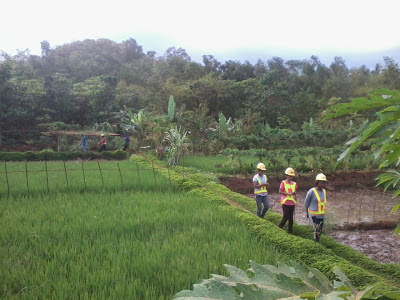 I like these short papaya varieties, they produce fruits already. 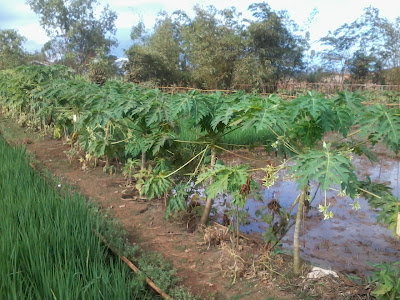 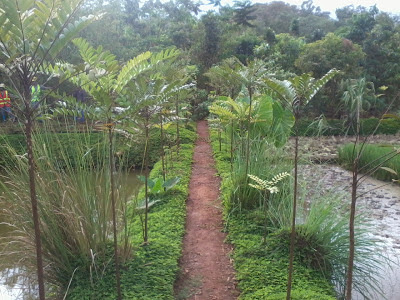 I enjoyed my visit and exposure to Rio Tuba.