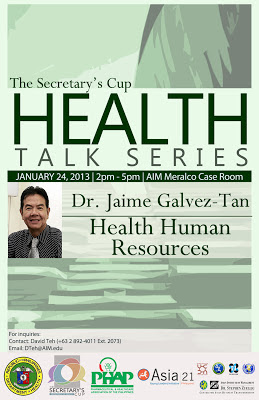 Last January 24, 2013, I attended a lecture by Dr. Jaime Galvez-Tan, a former DOH Secretary and now a health consultant for many agencies, heads a health NGO and is back to teaching at the UP College of Medicine. The event was organized by the Dr. Stephen Zuellig Center at the Asian Institute of Management (AIM), in partnership with several organizations. It was a good lecture because the focus is on human resources in healthcare -- nurses, doctors, dentists, pharmacists and other professionals.

His paper title however, has a negative implication, "Who will heal us now?", implying that very few have the capacity to provide the nearly 100 million Filipinos sufficient healthcare.

He started with an upbeat mode though, saying that 2013 is the "Golden Year for Health". Credit goes to the passage of the Sin Tax law plus the huge hike in DOH budget. 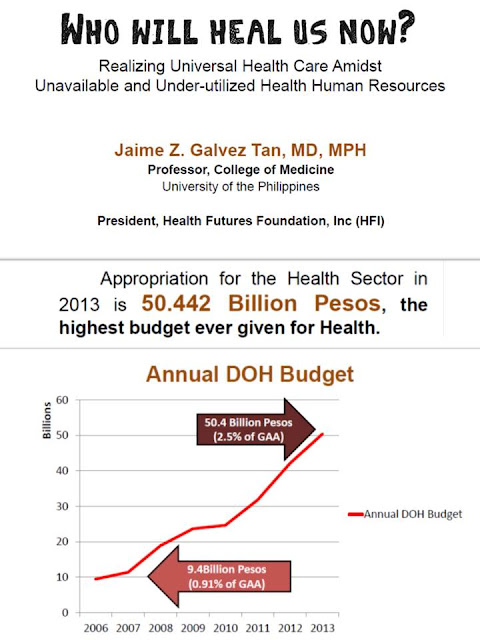 Dr. Tan is credited by many professionals and observers of Philippine public healthcare as among the few individuals who have greatly influenced the current President to pour more money on healthcare. He was among the key advisers to the President when the latter was still on the campaign trail during the 2010 Presidential elections. See more numbers in the jump in public spending on healthcare. The data on P31.35 B for 2013 is projection from Sin Tax additional revenues alone.

Then he asked that while there should be a balance between health infrastructures (hospitals, clinics, laboratory facilities, medicine, nursing and dental schools, etc.) and health human resources, the latter seems to have been left out in healthcare priorities. 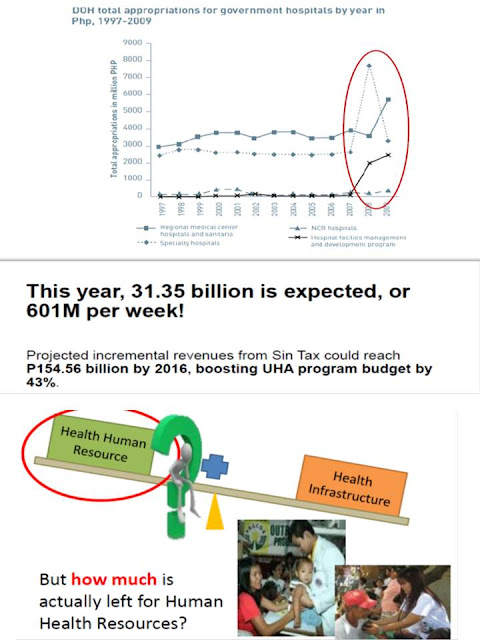 Universal healthcare (UHC) or Kalusugang Pangkalahatan (KP) is the banner of the PNoy Aquino government's health agenda. It is actually a rehash of previous attempts by previous administrations, dating back since the 60s and 70s perhaps, with the creation of Medicare and its mandatory membership for all. Corruption, wastes and inefficiency killed it, along with the money and forced contributions by members on top of the taxes they paid to the government. That is why the Philippine Health Insurance Corporation (PHIC or simply PhilHealth) was created in 1995 to replace Medicare.

Of course I don't believe in government monopolization and nationalization of healthcare. Like in other sectors, a monopolist is not seriously interested in bringing down costs, but in jacking them up. Customers and patients have no choice anyway but give their money to the monopolist. I believe that  healthcare competition and deregulation is a more cost-effective way to achieve UHC. Nonetheless, here are Dr. Tan's graphics on UHC. 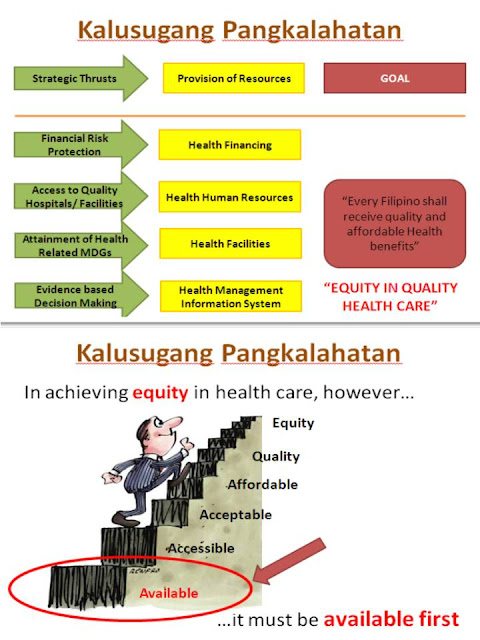 The UN's MDGs are just two years away. Of the eight sectoral goals, three are healthcare related. And healthcare is not just a mandate of the DOH but also by the various local government units -- provincial, city, municipal and barangay governments -- and other agencies like the UP College of Medicine, UP Philippine General Hospital (PGH).

The second chart has been repeatedly used by the pro-RH bill (now a law) camp. The advocates of that law in effect were saying that the DOH, LGUs, other agencies were very inefficient and wasteful in not reducing maternal healthcare, despite the tens of billions of pesos given to them yearly. Did the officials of these agencies only pocket the money that was meant to reduce maternal death? So there is a need to create a new law and new spending program to reduce maternal healthcare? Their argument was indeed lousy. But they won, meaning more money for various government agencies, plus additional regulations and interventions. 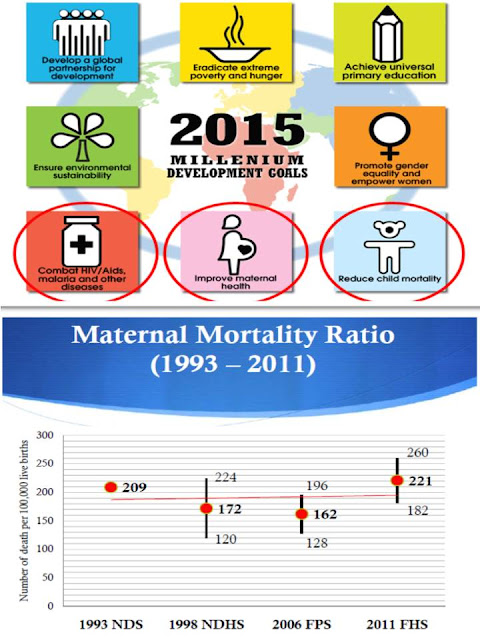 There are some good news in reducing infant and child mortality as shown in the next chart. But the next chart, on rising HIV incidence in the country, is another bad news, and the MDGs are due in more than two years.

Two possible explanations why there are rising cases of HIV/AIDS or other diseases. One is that incidence has indeed rose; or the incidence may have been the same as in previous years, but were under-reported before while more accurately reported now. 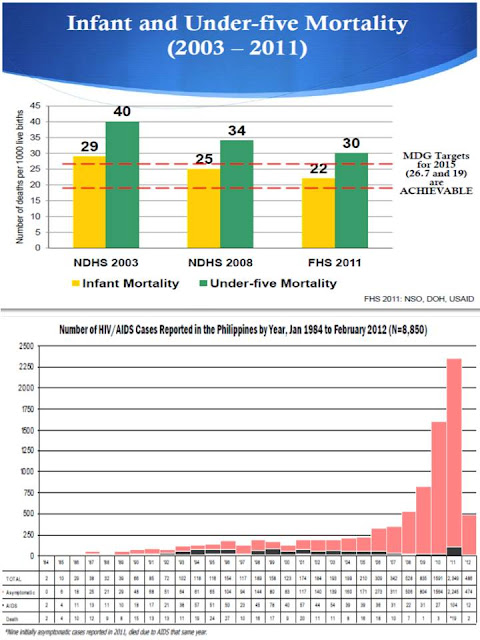 Dr. Tan gave a case study of the province of Compostela Valley, between Davao del Norte and Davao Oriental, in Mindanao. I will skip that part and move to national figures in his presentation.

This is simply not feasible without incurring (a) more borrowings, (b) more taxes and fees, or both. But haven't people heard that the total public debt of the Philippine government as of end-2012 was P5.44 trillion already, or equivalent to a government debt of nearly P57,000 for each Filipino, from babies to oldies? This is not enough, government should borrow more, for public health alone? But public education, public housing, public roads, agrarian reform, agri credit and irrigation, soldiers, policemen, judges, legislators, etc. also need more tax money...

Dr. Tan said there is a need to hire more nurses. Why nurses? Because they are "trained to assess and make necessary referrals not only of obstetric conditions but also of all health needs of all clients across lifespan. And trained to do community mobilization, health promotion and disease prevention activities." 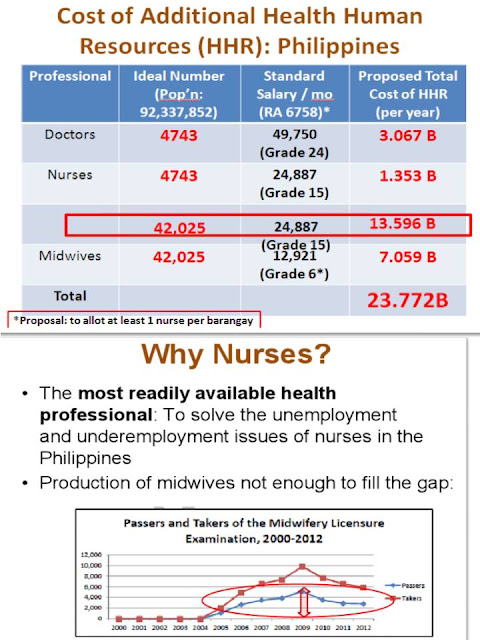 Government should hire more nurses "to solve the unemployment and underemployment of nurses in the Philippines"? Uhh-ohh. Young people should take nursing even if there is relative over-supply of the skill already, anyway government will hire them if they are unemployed? This is not a good argument and proposal.

Finding now the culprit for the lack of health professionals in the country. And number one is... migration of our health workers abroad, temporary or permanent. That "70 percent of all Filipino nursing graduates are working overseas" is from a 2003 or 2004 study. Whether that data was accurate at that time or not, I think the ratio would be smaller these days. 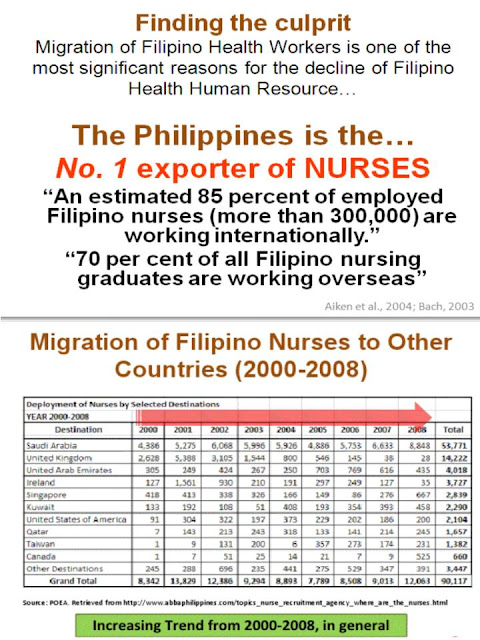 During the open forum, I commented that the table he showed is only for outflow of nurses. He did not show the inflows, or Filipino nurses who come back after their work contract has expired or for other reasons. If one will say that "12,000 nurses go abroad every year" implying that no one is coming back, that's indeed a bad sign. But if say, 10,000 also come back every year, so that net migration is only 2,000 a year, that is not alarming. Dr. Tan noted my comment and said that he will have to dig data how many have come back to get net outflows data.

Dr. Tan also showed a chart of a big gap between the number of examinees for the nursing board exam vs. job deployment abroad from a paper by a certain Veronica Uy in  2009 and noted a "decline of migration: oversupply of Filipino nurses"

But is the demand for Filipino nurses abroad really declining? Dr. Tan said the answer is No. Demand is still high. But I think his next slide, that there are "fewer Filipino nurses in the country" is not correct. 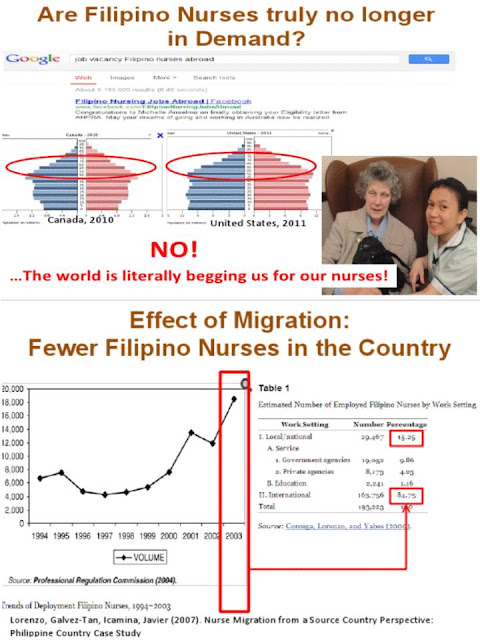 For one, the data he used, table on the right, was as of year 2000 although his paper was presented in 2013. Second, while demand for Filipino nurses abroad is high, supply of new nursing graduates is also high. Until a few years ago, there were many stories of licensed engineers, accountants, teachers, even doctors, taking up nursing degrees so that they can be hired easily abroad. Demand spikes upward, supply immediately adjusts and follows.

Posted by Bienvenido Oplas Jr at 10:18 AM