Rule of Law 19: How to Strengthen RoL? 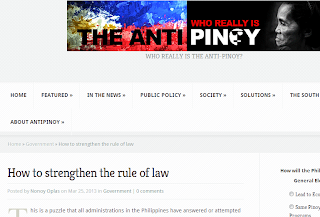 This is a puzzle that all administrations in the Philippines have answered or attempted to answer. And it seems that almost all of them have provided the wrong answer, or partially correct answer.

I had a long discourse last week with a friend who teaches Political Science at UP Diliman, Prof. Amado “Bong” Mendoza, and some friends in his facebook wall.

I agree with you Nonoy Oplas that we do not have a rule of law culture and situation in our country. The question to be asked and answered: why is it the case? Some economists (like Noel de Dios) point to the mismatch between what is provided by law and what is socially acceptable–corruption is okay as long as the loot is shared. Randy David opines, following Niklas Luhman, that the rule of men is a key feature of pre-modern as well as societies in transition to modernity. Foreign scholars (Douglass North, Daron Acemoglu, etc.) argue that the Philippines either has a limited access (rather than an open) or an extractive rather than an inclusive society. The malaise is not limited to the Philippines. Indeed, very few political scientists are in mainstream political studies. We should take off from Temy Rivera’s explanation of the incoherence of the Philippine state’s policy. If policy is incoherent, it will be perceived as irrational, impermanent, and changeable. The situation offers numberless opportunities for negotiations, importuning, bargaining, and horse trading. This is the environment where the administrator, the lawyer will flourish and prosper.

If people are serious in seeing a society with strong rule of law culture, then one solution is to stop supporting the expansion of laws. Scrapping or abolishing existing laws is too hard, but stopping the creation of new laws is easier. Some flexibility, support just a few laws amending existing ones. Unfortunately, for many political and social scientists, economists, civil society leaders, they support if not write, more new laws so long as those legislative proposals or administrative orders conform with their “grand ideas”.

Rule of men is the reverse of the above.

Equating “rule of law = good governance” is lousy. For instance, the law on subsidies, like tertiary education subsidy. Classic rule of law says that if the state should provide subsidy to one group of students, it should extend that subsidy to all students, no exemption. But the state violates this, grants subsidy to students of UP and other SUCs but not to students of UE, UST, etc. The state is a violator of the rule of law. Good governance means making this violation well executed.

About the big number of lawyers or their prominent role in PH society, that’s a result of the “rule of men” and not “rule of law” culture in the country. In the latter, you need only very few laws — law against murder and shooting, law against stealing and carnapping, law against rape and abduction, etc. The law applies to all.

In a rule of men society, administrators and governors make rules that apply to some but not to others. Administrators have arbitrary powers to whom the laws will apply and to whom they don’t. One would need a battery of lawyers in that environment, to know the various loopholes of the thousands of new laws, from LGU regulations to Department Orders and/or Circulars to Executive Orders, Republic Acts, Presidential Decrees.

Anarchist Kropotkin said, “The law has no claim to human respect. It has no civilizing mission; its only purpose is to protect exploitation.”

It’s another thing though, when the law and the state says, “No one moves, no one can start putting up a barber shop or bakery shop or a taxi company, unless he will get these permits and pay these taxes and fees: barangay permit, electrical permit, fire department permit, health and sanitation permit, Mayor’s permit, BIR permit, DTI or SEC permit,…” This expansion of laws and prohibitions results in limitation, not expansion, of individual freedom.

It’s weird how left anarchy (communist) and right anarchy (libertarian anarchy) can have similarity. And that is one difference between the libertarian anarchist vs minarchist. I belong to the latter. I don’t believe in anarchy. Some state coercion and prohibition are useful in protecting and expanding individual freedom. Like the law against murder.

The libertarian minarchist position recognizes there is a role for government, and that is to protect the citizens’ right to life (against murder and physical aggression), right to private property (against stealing, land grabbing, etc.) and the right to liberty (freedom of expression). But all other extended functions of the state are either secondary or unnecessary, and tend to restrict and limit, not respect, individual freedom.

“To the powerless, the rule of law is abstract and cannot be eaten.” This statement is wrong. The poor also have private property – some pigs, goats, carabao or cow, motorcycle, tractor, tricycle, house, tv, cellphone, etc. When these simple private properties are stolen, it means a lot for them. The law against stealing, if properly and strictly implemented, zero exception, is something that the poor really look up to.

Having rule of law, more than various subsidies, would mean a lot to the poor. Of what use it is to receive free education, free medicines, subsidized MRT fare, subsidized housing, etc., if one’s kids can be abducted and raped or killed anytime? Or his cows or tricycle or piece of land can be stolen/grabbed by bullies or people with strong political and police connection? Income redistribution, welfarism and subsidies are meaningless if one’s right to life, right to private property, are being violated and disrespected.

On “stop supporting the expansion of laws”, if one will check the list of old and new laws, about 90 percent are local laws (creating or renaming a new municipality or city, creating a new RTC or drug rehab center, declaring ____ (date) as provincial holiday for ___ province, etc. For the national laws, among the things that legislators do is expand the Executive bureaucracy like creating a new commission or a new regulation authority. Or expanding the legislative bureaucracy like creating a new Oversight Committee, usually with a budget of P10 M a year, and that committee will meet just once or twice a year and spend little, the balance will go to the discretionary fund of the legislators.

If we have to support new laws, they should be amending existing laws, like amending the NIRC and cutting income tax from 32 percent top rate to say, 15 percent flat rate.

Someone commented that  “rule of law has an embedded liberal ideology, biased towards individualistic notion of life and society… progressive notion of negative liberties or social rights are more appropriate for the Philippines and other Third World countries.”

Well, if some criminals enter his house and steal many things and even sexually abuse his wife or daughter or sister, perhaps that’s the time that he will appreciate rule of law and its strict implementation, that the laws against stealing and sexual abuse should be applied in full force, and that the implementer of the law, the government, is doing this job religiously and not side tracked with concerns like running casinos, universities, banks, and so on.

Rights should be coupled with responsibilities, always. Entitlements should be coupled with obligations, always. People who over-eat, over-sit, over-drink, over-smoke, and when their body becomes bloated and sickly they run to the state to demand that “health is a right” are lousy, if not idiots. No one put a gun on their heads so they will over-eat and over-drink, now they want the state to put a gun on the heads of responsible people to finance their healthcare via more taxes and fees.

What many people call as “rights” are actually privileges. That is how students in UP and other SUCs get subsidies while students in FEU, Mapua, CEU, other private universities don’t. Some are given privileges which they call rights, while others are simply denied of such privilege.

Someone commented, "In our society, the source of order is not the law but human relations. Social order does not come from the state but from the community."

I disagree with the first sentence, somehow agree with the second. Strictly speaking, laws do not only come from government, national and local. Private enterprises, CSOs, also have their own laws. A mall is a private place, it has its own rules, like everyone who enters is subject to physical check of bags; thieves who will be caught will be photographed first before they will be turned over to the police, and so on. These rules, at the micro level (villages, companies, households, etc.) help create order in society, beyond human relations. The state has its own laws too, like the laws against killing and stealing.

On laws by the state and why they are not the source of social order, I can partially agree with this. My earlier comments above centered on it actually — when laws have become too numerous (Republic Acts, Executive Orders, Department Orders, plus City and Provincial Ordinances) and complicated, that’s where the rule of men and not rule of law prevail. Legislators and administrators/implementers of those laws have leeway and arbitrary powers who can be explicitly exempted from regulations via loopholes in the law, or be implicitly exempted via official and personal prerogatives.

So back to the original question on how to strengthen the rule of law, in the Philippines or elsewhere. I think the simple answer is that government laws should be as few as possible, and as generally applicable to all people as possible. This way, people will easily remember those restrictions and the penalties for their violations.

Where there are few laws and prohibitions, society will be more free and more peaceful.
-----------

The two students who were interviewed (one's a student regent from UP, the other is the student council leader who led the burning of chairs at PUP) mentioned that they were against STFAP because they believe students in state universities should be fully subsidized, including rich students who choose to go to UP.

When asked by Monsod if it would be ok for private schools like Ateneo and La Salle to charge high tuition rates, the two students said yes.

As for Monsod, she had a commentary at the end of the show. She did say the students' argument regarding that (free tuition for rich state U students) did not make sense economically, but she says UP/PUP should try their best to help students graduate in other ways (I did not pay attention much to this part, so I forgot 'what other ways' she was talking about).