The MRT line from North Avenue in QC to Taft Avenue in Pasay is the most congested among the three urban train systems in Metro Manila. At rush hours, it is relatively common that passengers in midway stations are “bypassed” once, twice or even thrice and wait for the next train as the trains are so packed with so many passengers. 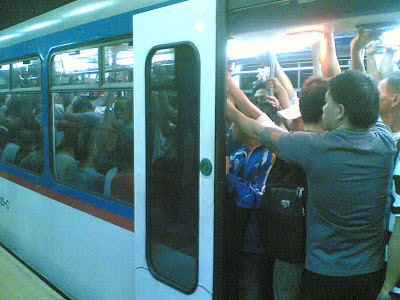 There is a new program by the Department of Transportation and Communications (DOTC) to help decongest the trains. They are fielding buses that will pick up passengers at North Avenue station only and stop only at the last three stations -- Ayala, Magallanes and Taft Avenue. The fare is the same, just P15. The fare in normal air-con buses for this route is at least P35. The government says this is a temporary measure until they are able to get new trains. 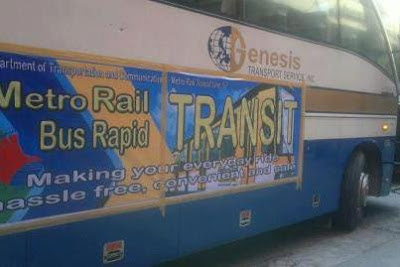 Ok, what is wrong with this scheme? Or the MRT/LRT fare subsidy in the first place?

One, government gives fare subsidy to commuters of Metro Manila, but not to commuters in other parts of the country, say the cities in Davao, Cebu, Bacolod, Iloilo, Baguio, Tuguegarao. This is another example of Manila favoritism by the Manila-based government.  Thus, it contributes to tax distortion. Taxpayers from many cities and provinces in the country who do not benefit from the subsidized train fare contribute to the fund.

Two,  it promotes bus line cronyism. Give handsome subsidies to the favored bus lines while slapping lots of bureaucracies, fees and penalties to other bus lines taking the same route. Thus, it distorts bus line competition.

Three, it distorts or defeats moves to decongest Metro Manila. The implicit message of the MRT/LRT subsidy and other government programs is this: "You in the provinces, come to Manila. We give MRT and LRT fare subsidy, housing subsidy and free relocation, lots of government hospitals and PhilHealth cards, etc."

Most subsidies violate the rule of law. The latter says the law (like tax-funded subsidies) should apply to all, no one is exempted and no one can grant an exception. So if government should subsidize commuters in M. Maninla, it should also subsidize commuters nationwide, and this is impractical and impossible.  In most cases, government itself is the single biggest violator of the rule of law. We are not talking about the laws against corruption and plunder, robbery and murder.
Traffic congestion can be solved more efficiently if government will step back instead of regulate more or subsidize more. The school bus system is one great way to reduce traffic congestion in bringing students to school and back to their homes, safe for the kids too. The same can be applied for office workers too. Instead of taking 3-4 rides one way (usually tricycle, jeep or bus, train or bus, then jeepney again to offices) and another 3-4 rides going back home, or drive their cars to avoid this daily hassle, have branded vans-buses bring passengers from their homes to offices and back.

A Singapore-based friend, Doods de los Reyes whom I had a long exchange on the same subject last year in  Transport Econ 6: More on Office Bus Carpooling, contributed once more. He wrote,

I remember originally there were no subsidies for the MRT. When the MRT 3 first started operations, the fare was P34 or thereabouts. It was too high and no one was riding on them, preferring to take the cheaper buses. But the government's contract with MRT3 is that they guaranteed viability so they started subsidizing the difference between the bus rate and the MRT fare. Now people realize the time saving benefits of taking the MRT and have gotten used to it along with the subsidy. In every country, the urban train station is always more expensive than taking the bus -- everywhere but the Philippines that is. The subsidy should have been set at a much lower price and patience should have been exercised to allow passengers to recognize the MRT for what it is -- a faster, more expensive alternative to taking the bus.

Yes, there should be NO subsidy to MRT passengers, otherwise the government should also make similar fare subsidy nationwide to avoid claims of favoritism and Manila-centric government policies.

Until about five years ago, MRT subsidy was about P5 billion a year. So the MRT operators earn lots of revenues: (1) government subsidy, (2) ads inside the trains, ads on the exterior of the trains, ads inside the train stations, at the train tracks (whole of Edsa), (3) lease of shops inside train stations, (4) others. The (5) passengers' fare are just icing on the cake as revenues from 1-4 are huge and substantial already. If (5) can be raised so that (1) will be eliminated, spare our pockets from this subsidy, it will be a win-win solution for all.

The Ayalas I think are part of the consortium that built the MRT on EDSA, that's how they were ablle to put up an elaborate space for stalls and shops at the Ayala station. An urban train system is essentially a real estate project first, a transport system second. I saw in HK and Sing, many train stations are just next to hotels, condos, and malls. A hotel or condo linked to a train station immediately commands a high price due to transpo convenience for their residents. Taxpayers subsidy is  unnecessary. But then again, we are in a series of government administrations where bureaucracy and cronyism rule over real entrepreneurship.

I think most countries subsidize the operation of their respective metro rail systems so I'm not going to say it's unnecessary. With the high cost of building, maintaining and operating a MRT, the host government will probably need to subsidize. A fast and efficient transportation system is needed to spur higher levels of commerce and investment in the areas covered so having one is always in the best interest of the government and the country at large. The MRT is in the metropolis because that's where the greatest benefit to the country can be realized. Smaller or less congested cities will not need it and the cost is great so I don't suggest we put one up in more regions -- they still benefit indirectly from the taxes collected in the metro. But I think the bidding and study done for the viability for the building of the MRT nor the guaranteed viability agreement wasn't well thought out nor transparently done. The government may well have to buy and takeover the MRT just so the country gets the most commercial benefit from its operation but the riding public really have to adjust their perception of what the commuting cost should be.

Some of the proposed MRT/LRT in Metro Manila are actually "unsolicited" meaning a consortium of big companies proposed on their own to the DOTC and NEDA board that they plan to build a train system somewhere. For instance, the Quiapo-Fairview via Quezon Avenue, Philcoa and Commonwealth Avenue, has been proposed since about 20 years ago or longer. Government sat on it, maybe the DOTC guys and LGUs were asking huge commission for themselves before they approve the project, we dont know. The point is that there are business interests, they smell good profit in building it, who are wiling to build the system. Make profit not so much from subsidy as it is heavily dependent on politics, but from various commercial and real estate projects that can be facilitated by many train stations along the route.
------------