Socialized Healthcare 13: On Inequality and Inclusive Business in HC

Two weeks ago, I attended this forum at the Asian Institute of Management in Makati, sponsored by the AIM-Zuellig Center for Asian Business Transformation, ACCESS Health, ASSIST and Globe Telecom.  Perhaps a coincidence, another forum that same day, same time, was held in Discovery Suites in Ortigas, about "inclusive democracy" starrring the UN and other groups. And this forum is about "inclusive business" starring the ADB and other groups. 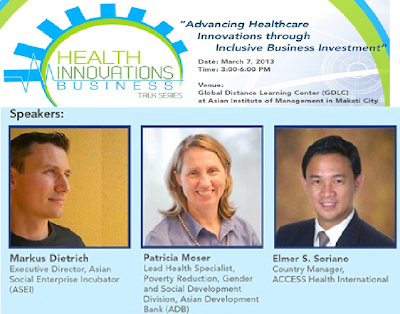 Dr. Moser showed several slides how inequitable the Philippines' healthcare system is.  The Under 5 years old mortality rate (U5MR) is high in the lowest quintile of the population, and skilled birth attendance is highest in Metro Manila and other Luzon regions and provinces, and lowest in Mindanao regions. For the total healthcare expenditure (THE), more than half came from out of pocket or personal and household spending. 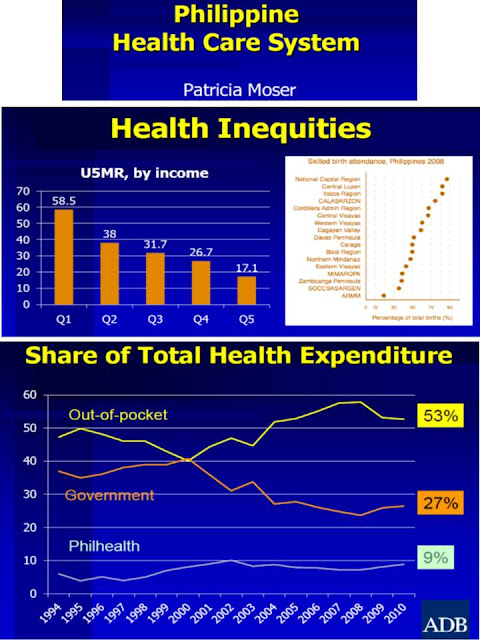 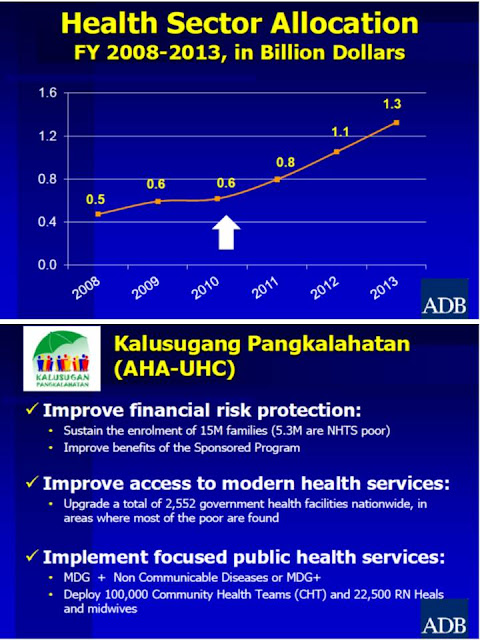 Financial protection by income. The two poorest quintiles are protected by the government, national and local, while the middle class and richer groups have private health insurance, on top of their PhilHealth membership contribution as this is mandatory especially for those in the formal sector. Ms. Moser's next slide is interesting. Many if not all ASEAN countries have strong private sector presence in healthcare even though their governments' health spending is substantial. Any discrepancy between actual spending and actual delivery can be attributed to bad governance and/or corruption. 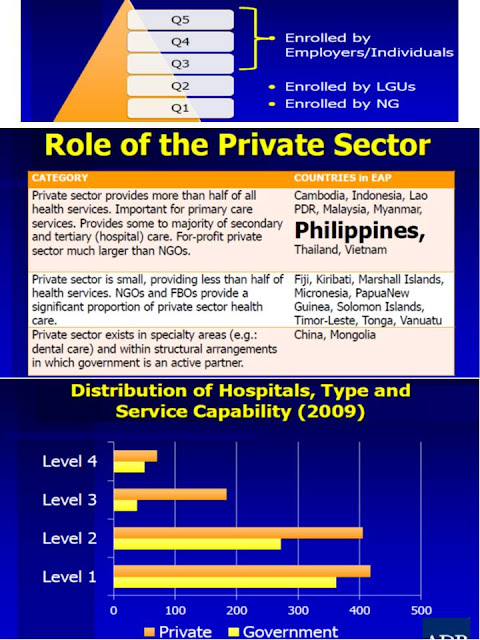 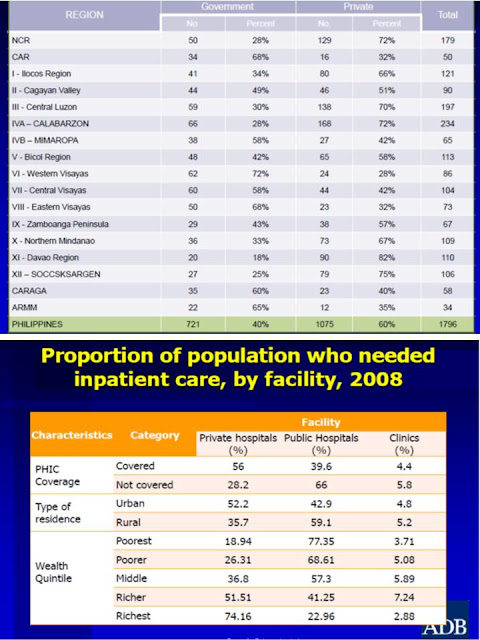 During the open forum, I commented that inequality is everywhere. Inequality in education, housing, transportation, clothing, etc. There is also inequality in watching concerts, some tickets are near the stage and are priced high while cheap tickets are also available, seats far from the stage. When riding an international flight, there is also inequality among passengers who ride Business, First class and Economy classes. But people generally accept inequality, they do not call for a revolution or massive government subsidies to equalize everyone.

On government health spending, I also commented that the ADB, WHO, UN, etc. data on PH public health spending is understated and wrong. They usually count only DOH + PhilHealth spending. They do not include some or all of other govt spending such as:

2. Philippine General Hospital (PGH), budget about P2 billion a year, part of the UP annual budget; hence, it is not counted as health spending but education spending.

4. When I was working at the House of Representatives in the 90s, our healthcare was OA. Congress pays for (a) employer share in PhilHealth contribution, (b) our HMO, Intellicare at that time, and (c) we have a medical and dental office with full time physicians, nurses, dentists, with free medicines, right in Congress. These are not counted as health spending but legislative spending.

5. The Senate, Central Bank, many other government offices and agencies also have similar healthcare over-protection for their employees and their dependents.

The next speaker was Markus Dietrich of Asian Enterprise Incubator (AEI). They do consulting work for the ADB, including this work on "inclusive business". He presented several charts about "non-inclusive" growth in the Philippines. I will skip those slides and just focus on his short discussion about healthcare. He asked if the PH private sector can help make growth more inclusive. 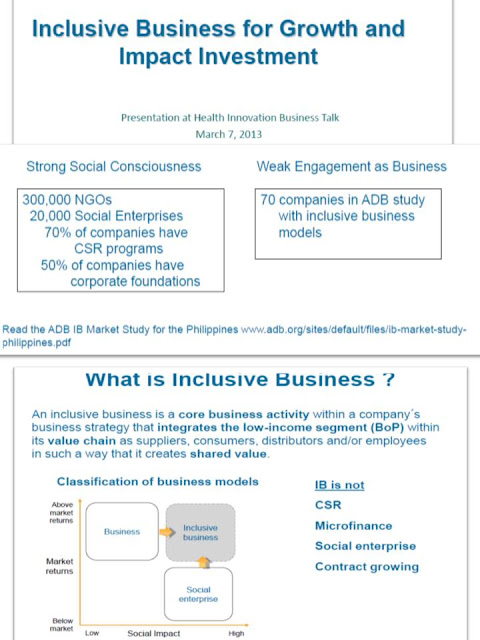 Then explained the IB market study that his company did for the ADB, especially for those in the "Base of the pyramid" (BoP). 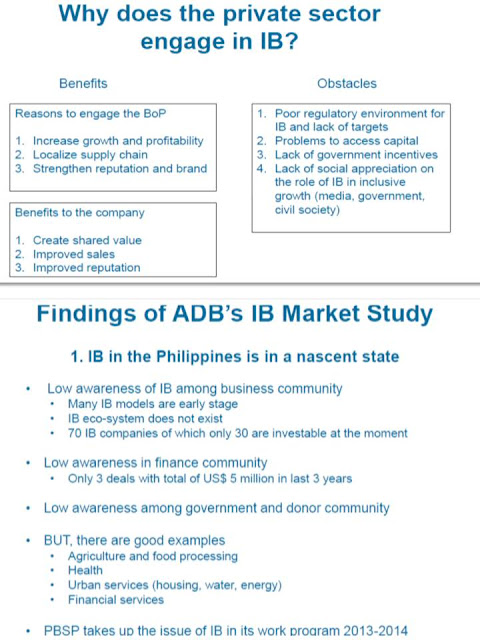 He is optimistic about the prospects for IB in the health sector. Profitability and returns are high, 13 percent or higher IRR, very high potentials for innovation, scalability, replicability, sustainability. 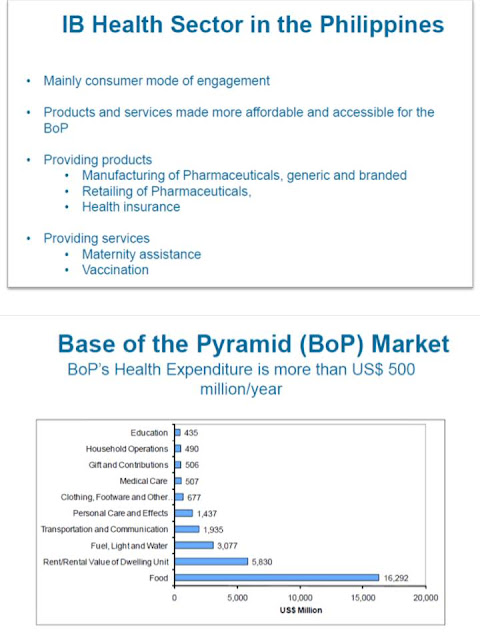 I will also skip discussing the short paper by Dr. Soriano, about several management framework in handling innovation. The two reactors that afternoon were Dr. Juan Nanagas of the Philippine Business for Social Progress (PBSP) and Dr. Oscar Picazo of the Philippine Institute for Development Studies (PIDS). Dr. Nanagas is a physician while Dr. Picazo is an economist.

Dr. Nanagas said that healthcare in this country is a "different animal" compared to many sectors because many people think that health is a right, an entitlement, that should be given to them for free and they should not directly pay or contribute to it. Some poor people may have the money to buy beer or Tanduay everyday, or smoke a pack of cigarettes a day, or eat chicharon, but that is for their "necessity" whereas healthcare should be given by the government.

Dr. Picazo gave an elaborate discussion about the problem of public-private delineation as they are often mixed and tangled with each other. Like public healthcare financing in private facilities, or private financing in public healthcare institutions. He mentioned a case of a DOH regional office in Region 2 that will not give a permit to a private entity that will put up a private hospital because the government will put up a public hospital there. He thought that it is an idiotic thinking, I agree with him on that.

On Dr. Nanagas' observation that HC in this country is a "different animal", I said that uch thinking is indeed a malady. People think only that "health is a right" and they never think that health is also a responsibility. So people can be irresponsible and they can over-eat, over-sit, over-drink, over-smoke, and when their body becomes bloated or sickly, government -- through tax money from the rest of society -- should bail them out. This populist thinking is often fanned and hyped by many politicians themselves, many people in government themselves, and even among many health NGOs.

There were many other comments from the audience and rejoinders by the speakers and reactors.

Before the forum ended, I commented that going back to the theme of the forum, Innovation and Healthcare, innovation is maximized or optimized under a competitive and not under a monopolized environment. For instance, among food shops and carinderias, competition is clear in terms of food menu, service quality and prices. Consumers have choices and options where to go. If there is a government restaurant corporation monopolizing a particular area, we cannot expect any genuine innovation in product quality and pricing.

In healthcare, health insurance is monopolized by the government. As of September 2012, PhilHealth was bragging that they have already covered 85 percent of the total Philippine population, nice. But a chart by Ms. Moser (above) shows that in 2010, of total health spending, PhilHealth covered only nine percent of the total. Why the big discrepancy or inefficiency? Check the monopolistic structure of PhilHealth.

Another example, the drug price control policy of 2009. Before the policy, competing drug manufacturers have wide leeway in producing different brands per molecule category. Say for amlodipine molecule (anti-hypertension), price ranges then were from P44+ per tablet most expensive to only about P5 cheapest. After price control, the price ranges have declined by half, P22 as the most expensive. The competition among brands priced between P22 to P44 was abolished, and everyone was forced to price their product downwards. Those who have little or no leeway to further bring down their prices were forced to either withraw their affected products or even go out of business. The overall implication is that if we want more innovation in healthcare or any other industry, we need less government intervention, not more.

Very good summary of the meeting Mr. Oplas. In a sense the whole health sector is a public-private partnership since the private sector has hospitals, clinics, etc and this is most probably because the government sector cannot provide everything to everybody (so they concentrate on the lower quintiles). On one hand health cannot be a purely commercial good following supply-demand sort of thing - on the other hand even in socialized health systems (e.g. Britain) there is still room for private providers. Hopefully the Philippines can find the system that works well with our culture, form of government, and economy. If not - we may stay where we are and change may only come radically.

Thanks Dr. Nanagas. I think one way to address this problem is to recognize inequality and people can live with that. The more that government forces equality, the more wastes and inefficiencies are committed, which defeat the purpose of their intervention.