Last Monday, March 04, I attended the “2013 Senatorial Elections: A Universal Health Care Forum” held at Traders Hotel, Manila. The event was jointly sponsored by the UHC Study Group, Pharmaceutical and Healthcare Association of the Philippines (PHAP), AIM-Zuellig Center for Asian Business Transformation, and the Journalism for Nation Building Foundation. There were many media people who came.

Three candidates from Team PNoy were invited (or accepted the invite?) that day, Ms. Risa Hontiveros of Akbayan Party, former Senator Ramon “Jun” Magsaysay, and Senator Francis “Chiz” Escudero. This coming Monday, March 11, three Senatorial candidates from team UNA will speak on the same topic, to be held at the same hotel. 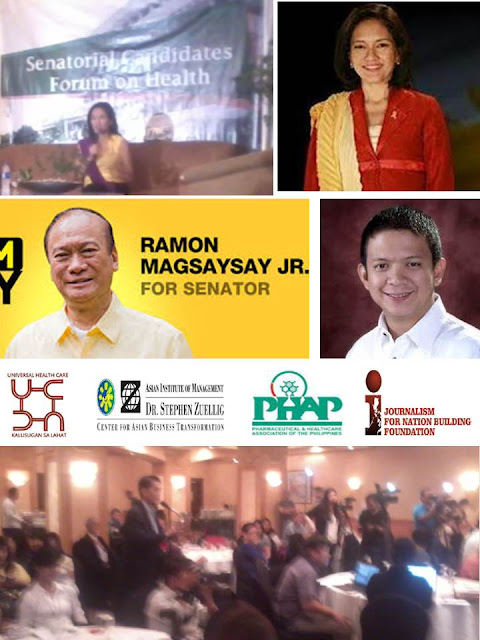 Ms. Hontiveros said that there is need for more government involvement,  need for more regulations by the government of the health sector because “markets do not work” well for the poor patients. That Filipino health professionals like doctors and nurses should stay in the country as much as possible because of the high need for their expertise, especially in the rural areas.

I added that it is weird that there are socialist leaning in a liberal coalition under a liberal government. In theory, liberalism is the opposite of socialism, they are east and west or north and south apart. There is some similarity between socialism and conservatism but not with liberalism.

She replied that hotels cannot be compared with healthcare so that while there may be no government presence in hotel, there should be one in healthcare because health is a right, many poor patients cannot afford private healthcare. Her being a social democrat is not consistent with being in a liberal coalition because their goal is the same, a clean and responsive government. I did not pursue a follow up question as there were other hands that were raised at the open forum.

Next speaker was Mr. Magsaysay, who said that one problem of the government is the high overhead cost,a bloated bureaucracy, resulting in high red tape and business bureaucracies. There is need to privatize some government functions to reduce cost. There are about 500 district hospitals nationwide, and many are barely surviving, local physicians can help by banding together to run and manage the hospital themselves, ownership will still be with government.

I spoke again during the open forum, I asked if there is anyone in the PNoy coalition who raise concern about the high public debt. As of end-2012, the total public debt stood at P5.44 trillion, or nearly P57,000 for each Filipino, from babies to oldies. People normally do not owe this big and only government is capable of expanding this inefficiency and stupidity of ever-rising public debt. Then I asked if he is amenable to remove or abolish taxation of medicines.

He replied that reducing the debt is indeed an important issue, and that there should be no tax on medicines, electricity, water and other essential services. And said that he supports a minimal government principle. I like this guy.

The last speaker was Sen. Escudero, said that there are many laws already, and some P500 billion worth of unfunded laws. If one goal of the sin tax law is to discourage children and minors from smoking, there is already an existing law prohibiting this, but no one has been arrested for violating this law. He also supported the renationalization of healthcare. Preventive healthcare is more important than curative healthcare.

What he said about unfunded laws is so true. For instance, Congress creates various regional or municipal trial courts, or various drug rehabilitation centers or new secondary or vocational schools, and yet they are not funded in the annual budget. I asked him at the open forum if he is open to the possibility of limiting Congress’ appetite at drug price control and mandatory discounts like the 20 percent discount for senior citizens and persons with disability, plus non-inclusion of the 12 percent VAT on medicine prices. The result of this is that various players in the pharma sector – drugstores, wholesalers, manufacturers, hospitals – are passing the burden to each other. For some small drugstores, some close down or those surviving have stopped selling some medicines for the senior citizens because they are losing money. So what happens is that there is “cheap but not available medicines.”

He said that the discount for senior citizens should be retained but there are other measures to bring down medicine prices. For instance, medicines that have been approved by the US Food and Drugs Administration (FDA) should not be subjected to another set of regulatory approval by our FDA and this will bring down the cost for those imported medicines. What is needed only is an MOU between the country’s FDA and its counterparts abroad, no need for a new law.

I failed to clarify that any amendment to the senior citizens discount should target only the poorer ones and exclude the rich senior citizens. Many of those small drugstores are struggling financially, some have already closed, and they are forced to subsidize the rich oldies. I like his proposal on the FDA drug approval process.

Dr. Alberto "Quasi" Romualdez, former DOH Secretary and among the core group members of the UHC study group, gave the closing remarks. He emphasized the problem of health inequity in the country.

We should avoid welfare populism as much as possible. Populism often leads to despotism. If the mob and the populists want all sorts of freebies to be provided to them by government, then the productive sectors of society will be the modern slaves that must finance all those senseless freebies.
-------------