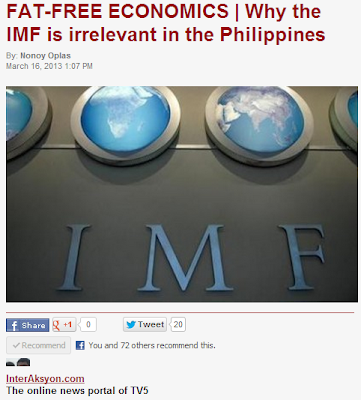 According to him, their main concerns now are (a)  the rising inequality in the Philippines and other Asian economies that have been growing rather fast recently, (b) unstable macroeconomic fundamentals that can restrict potential growth, and (c) raising public finance to develop human capital and public infrastructures.

Here is one of the charts Singh showed in his talk. While inequality has stabilized in sub-Saharan Africa, or declined in the Middle East and North Africa, as well as in Latin America, inequality in the Philippines and other Asian economies has increased. 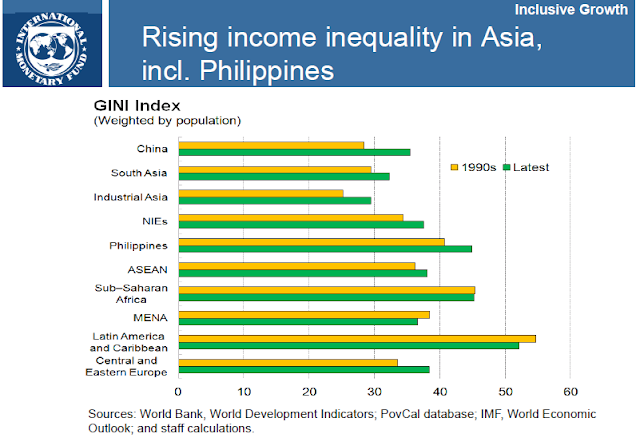 Another slide he showed pertains to the difficulty of doing business in the country -- with the Philippines ranking in the 140s globally -- and the low level of public investment in infrastructure as seen from the country's low infrastructure score. 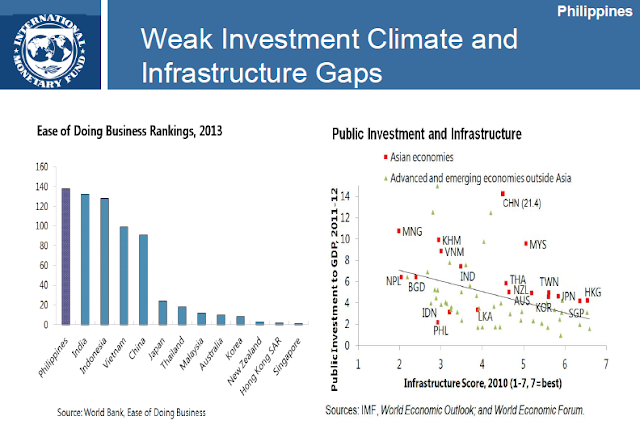 During the open forum, I asked Singh two questions. The first is: Has the IMF become irrelevant to many Asian economies? Its focus on solving inequality and inadequate public spending on education and healthcare betrays a shift away from the lender's original mandate of helping countries suffering from balance of payments (BOP) difficulties.

The IMF was organized in 1945 to “promote international monetary cooperation… facilitate the expansion and balanced growth of international trade… promote exchange stability and avoid competitive exchange depreciation… assist in the establishment of a multilateral system of payments… and in the elimination of foreign exchange restrictions which hamper the growth of world trade… give confidence to members by making the general resources of the Fund temporarily available to them under adequate safeguards… (and) shorten the duration and lessen the degree of disequilibrium in the international balances of payments of members.” This is contained in the Articles of Agreement of the IMF, Article I.

There is hardly any BOP difficulty in Asia these days , making the region the envy of the US and the EU. In fact, in the wake of the Asian financial crisis of 1997-1998, the Asean and its three biggest neighbors -- China, Japan and Korea -- organized the Chiang Mai Initiative,  which pooled money that any signatory to the agreement can draw from in case of BOP problems.

In the case of the Philippines, it no longer owes the IMF, having graduated from the lender's fiscal and macroeconomic tutelage a few years back. On the contrary, the Philippines lent $1 billion last year to the IMF to help the EU address its fiscal difficulties.

So if the problem is back in the US and the EU -- the so-called developed regions that organized the IMF and two other institutions at Bretton Woods after the Great Depression -- the million-dollar question is why the IMF persists in sending "experts" to countries like the Philippines to pontificate about issues we already know about and the solutions to which have been discussed ad naseum?

In the same vein, is it wise for the Philippines to lend money to the IMF so it could maintain a representative in the country? Why pay so much for a bureacrat, especially when talking can be done more efficiently, if not effectively, over the Internet?

In his reply to my query, Singh said addressing social inequality can help economies sustain their growth through a more productive labor force. Sounds like someone from the World Bank or the Asian Development Bank (ADB), right?

This betrays more than just irrelevance on the part of the IMF in so far as countries like the Philippines are concerned. If you check the IMF website, then you'd discover that the lender has adopted the same line as that of the World Bank and ADB: "To foster global monetary cooperation, secure financial stability, facilitate international trade, promote high employment and sustainable economic growth, and reduce poverty around the world.”

Now this raises the issue of redundancy, which was the second question I raised during last Wednesday's forum. The IMF's fellow Bretton Woods institution, theWorld Bank was organized precisely for that: “Our work is challenging, but our mission is simple: Help reduce poverty.”

As for the ADB: “The ADB aims for an Asia and Pacific free from poverty… alleviate poverty and help create a world in which everyone can share in the benefits of sustained and inclusive growth.”