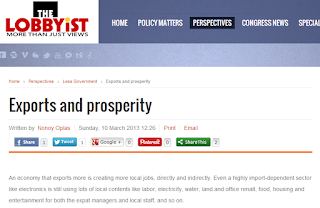 An economy that exports more is creating more local jobs, directly and indirectly. Even a highly import-dependent sector like electronics is still using lots of local contents like labor, electricity, water, land and office renalt, food, housing and entertainment for both the expat managers and local staff, and so on.

The less import-dependent service exports like business process outsourcing (BPOs) tend to create more local jobs and more local support businesses. Thus, an economy must aspire to ramp up its exports capability as there is unlimited number of consumers in the global market.

Philippine total merchandise exports in 2012 was  almost $52 billion, 7.6 percent higher than the 2011 level of $48.3 billion. Export growth in 2012 were fast in Hong Kong, S. Korea and Thailand, with growth of 28 to 29 percent over their 2011 levels. Exports to China contracted  by 1.2 percent last year compared to 2011 level.  The territorial dispute with China at the South China Sea or West Philippine Sea may have contributed to this decline.

Since joining the World Trade Organization (WTO) in 1995, many things have changed in the country’s major buyers of merchandise goods. Because of the failure of multilateral free trade to be fully implemented, countries have turned to regional and bilateral free trade agreements (FTAs) and this is shown in the numbers below. 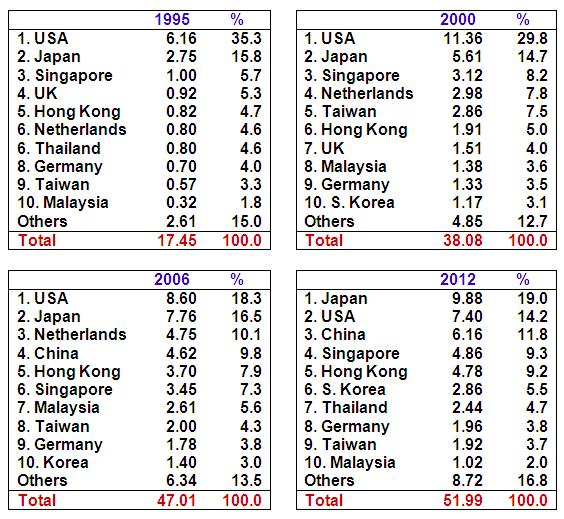 The US has been trading more with its neighbors in North America compared with its trade partnership with the Philippines and other Asian economies. So the share of the US of the Philippines’ exports has significantly declined from  35 percent in 1995  to only 14.2 percent last year.

Asian markets have been buying more from the Philippines. For instance, Hong Kong’s share rose from 4.7 percent in 1995, more than doubled to 9.2 percent last year. Singapore, from 5.7 to 9.3 percent over the same period, and China, from being an outsider in the top 10 in 1995, to third biggest buyer in 2012.

Japan,Taiwan, Malaysia, Thailand and Germany were somehow able to retain their average share from 1995 to 2012, with slight changes in market share in between these years.

A country’s openness to global commerce or free trade-ness is a very important policy to improve its economic competitiveness and development. To produce good quality export products at competitive prices and hence, export more, one must get various raw materials, intermediate products, capital goods and machineries, finished consumer goods at competitive prices from as many producers from many countries whenever possible. And foreign economies that exported to the home country would tend to become more open to the exports of this home country.

While regional and bilateral FTAs are better than protectionism and trade paranoia, there is a better option, and that is unilateral trade liberalization, like what Hong Kong is doing. Millions of people around the world know that certain products and services that are not available in their countries at a good price can be found in Hong Kong. So that small economy is able to attract tens of millions of visitors, conference attendees and other tourists every year. Its airlines, hotels, restaurants, malls and shops are benefitting immensely. Hong Kong is importing goods in thousands of container ships and exporting in hundreds of millions of shopping bags as the tourists fly back to their home countries.