I have a good friend, a true blue academic scientist currently teaching at UP Diliman. He got his BS Math also from UP Diliman in the 80s, he did not graduate on time though because he was an activist. One time, he was shot by the police in one of the anti-Marcos rallies. If he was not athletic – he was a marathoner too, finished several 42K runs then – he should have died that day as the bullet pierced a number of his vital internal organs. His name is Dr. Fidel R. Nemenzo.

Fidel toned down his involvement in student activism and pursued his real love – Math. He got his PhD Math from Sophia University I think, in Japan, specializing in number theory. When he came back to the Philippines, he was the only person here who has that specialization. I do not know now. Fidel teaches at the UP Math Department, Diliman campus.

Last week, he got a very prestigious and coveted award for most science researchers, the Achievement Award (for Mathematics) given by the National Research Council of the Philippines (NRCP), DOST. The event was held at the Manila Hotel. Most awardees in the past were from the applied sciences/math, doing research that is immediately applicable to problems of the nation. So Fidel felt good that his work as a pure theorist, sometimes referred to as “useless, far out” work is being recognized. 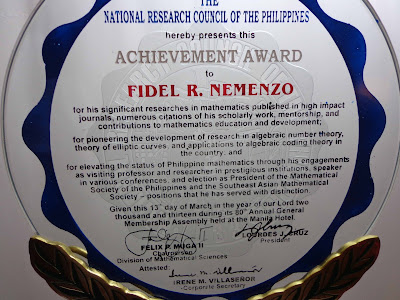 Portion of the plaque says,

For his significant researches in mathematics published in high impact journals, numerous citations of his scholarly work, mentorship, and contribution to mathematics education and development;

or pioneering the research on algebraic number theory, theory of elliptical curves, and applications to algebraic coding theory in the country, and

for elevating the status of Philippine mathematics through his engagements as visiting professor and researcher in prestigious institutions, speaker in various conferences, and election as President of the Mathematics Society and the South East Asian Mathematical Society – positions that he has served with distinction…

There should be a few  other Filipino researchers and academics in the basic science and math field, whose work are more appreciated abroad than here.  Big brains who get published in prestigious journals but never land in the front page of the Inquirer and other mainstream media.

In contrast, bar exam topnotchers and PMA top 10 graduates, even PNPA top 10 graduates – their names and faces -- always land in the front page of these big local media every year, no exception. do. Which speaks of the shallowness of PH media. Much, much brighter Filipino minds who come back with a PhD in molecular biology or PhD in particle physics, computer algebra, etc. never make it to the front page. Maybe in small inside pages, if ever.

Which speaks of the shallowness of the mainstream media, and even among civil society organizations (CSOs). Too much focus on lawyers and those who wield guns and bombs.