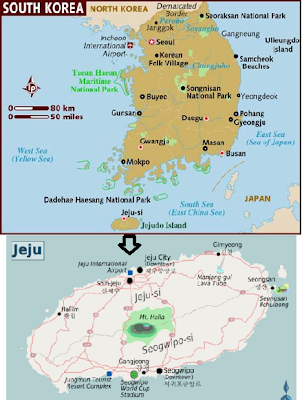 The Economic Freedom Network (EFN) Asia will be participating in the Jeju Forum for Peace and Prosperity 2013 Conference this coming May 29-31, 2013, to be held at Haevichi Hotel and Resort Jeju, S. Korea. I think this will be the first time that the network  will join this big international conference held yearly in the southern island of Jeju. The Friedrich Naumann Foundation for Liberty (FNF) Korea Office is working with the EFN Asia Secretariat in Bangkok in the network's participation.

This forum was invented in 2001 meant for a regional dialogue to promote peace and prosperity in Asia, the Korean Peninsula in particular. Then it became successful in attracting more regional and international participants, it later became a big international conference held every two years, then made an annual event since 2011.

I have heard and read about this forum in some news reports in the past, but I did not pay much attention to it. I thought it is just an extension dialogue of the famous World Economic Forum (WEF) held annually in Davos, Switzerland.

Early this month, the Regional Programme Officer of FNF for Economic Freedom and Human Rights, Pett Jurapaiboon, invited me to be the rapporteur of one of the panels in the Jeju Forum, and that panel will feature important and known speakers within EFN Asia.  I immediately said Yes to Pett. Well, my batting average for all FNF invites, whether here in Manila or the regional office, has been 100 percent so far. I will be a rapporteur, not speaker, in a panel on Economic Prosperity in Asia : Dealing with Economic Nationalism, to be held in the afternoon of May 30. Thanks much, Pett. I am very excited to attend this big international conference.

My interest in joining this and other regional events like the EFN Asia annual conferences, is simple: learn more how we can achieve regional and global peace and prosperity. Peace and economic prosperity.

Enough of war, armed conflict and militarization of disputes that can be peacefully resolved through diplomacy and serious, honest dialogues. Enough of spending huge amount of taxpayers money to buy heavy instruments of war and destruction.

Enough of economic restrictions and prohibitions that create poverty. If people, rich and poor alike, want to start a food shop ala "carinderia" in the Philippines or a modest housing or big residential condo, so be it. Governments should not put too many regulations, restrictions and taxes for these useful human endeavor that create jobs and provide useful goods and services to the people.

So EFN Asia's chosen topic, dealing with economic nationalism, is timely and important. Economic nationalism and protectionism means only one thing: reduction of choices and options, reduction of human freedom, to choose products and services that can best serve their personal and enterprise needs and priorities. When national governments say to its people, "You cannot buy these goods from other countries at these prices. Better buy only from locally-made products, or buy the imported ones at high prices and limited quantity", that is limiting choice and freedom.

The same way, when national governments also declare to its citizens, "You cannot study or work abroad unless you comply with these requirements..." and list down a dozen prerequisites, taxes and fees to pay as if one is applying to be a criminal abroad, that too, is limiting choice and freedom. Some poor job applicants to work abroad become poorer as they sell some personal and family properties so they can pay those multiple fees and taxes, both to the government and the favored job placement agencies and corporations that were accredited by the government.

The topics in the 2 1/2 days forum are wide. To accommodate those different topics, four to five simultaneous discussions will be held. Here is the list of topics on the afternoon of Day 2, May 30. 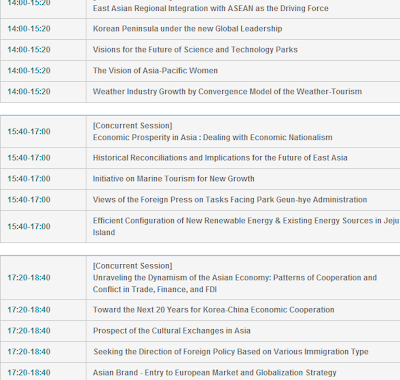