This morning, I saw this poster in the facebook wall of one or two friends, about the Mining Act of 1995 (RA 7942). I think this was made by the Legal Rights and Natural Resources Center, Inc. (LRNRCI). 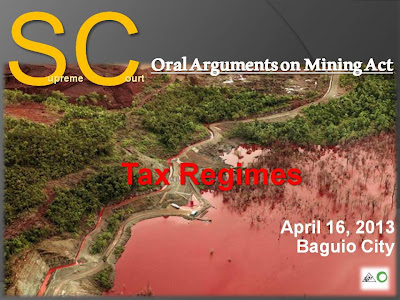 Three things caught my attention. One, oral debates at the Supreme Court. Some groups could be contesting the constitutionality of that law until now. But it’s an 18 years old law now, why would its Constitutionality be questioned and not earlier?

This law is a product of Congress, not the SC. So people can initiate and support new legislation that will scrap or significantly amend that law. Why can't they go through this legislative process?

Two, Tax Regimes. The focus of the oral arguments is on taxation? But a new bill on mining taxation will be introduced when the new Congress resumes in late July this year, so why would the Supreme Court hear arguments on things that are Constitutionally a function of the Legislature?  I also read that the BIR made recent Revenue Regulations that seem to reverse the Mining Act on taxation. The Act says taxation should start "after a cost recovery period" or similar term, while the BIR wants taxation to start "during cost recovery period." The BIR is the mini-legislator and implementer at the same time, weird.

Three, the photo. Am curious which mining project it came from, and if it is the actual mining site or a mine tailings pond? If it is the latter, then that company is doing responsible mining, preventing mine tailings from going into the sea. Mine tailings ultimately dry up, wild grasses can grow on them later. A company may also cover a dried up tailings pond with ordinary soil, then plant trees on them. After a few years, there is zero trace that it was once a mine tailing pond.

Then there were two news reports yesterday about this event in Baguio next month, below. Portion of the news report from PhilStar says that the SC will hear “alleged adverse effects of mining to the environment, health of the community and human dignity.”

I didn't know that the SC is also into oversight function, I thought it is the job of the Executive branch (DENR, MGB) and Legislative branch that creates or amends existing laws.

The Consti provision, “All lands of public domain, waters, minerals, coal, petroleum and other mineral oils,... are owned by the State.” (Art XII, Sec. 2, PH Constitution)  I think is misunderstood. When a mining company removes top or mid-soil and rocks, say 10 meters below the original level, the land is still there. One can dig 20 kilometers of the planet's crust, deep into the mantle (but they will burn due to intense heat from the planet's core) and the "land area" is still there, owned by the state.

Many anti-mining groups and individuals argue that mineral deposits and products are non-renewable and must be protected by the government from commercial interests. This position is questionable actually.

In a mining forum at DLSU that I attended, a mining engineer from UP, Rodalee Ofiaza, said that geologic processes -- movement of magma (molten rock, still underground), various hot gases from the planet's core to the mantle, onto the crust (the soil where we stand) can turn ordinary soil and rocks into mineral deposits via igneous process or sedimentary process. With the help of volcanoes and earthquakes, which allow the trapped magma and gases at the outer core to move upwards. 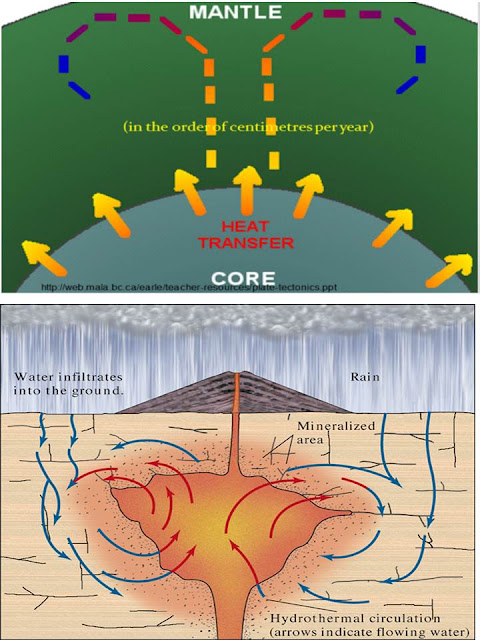 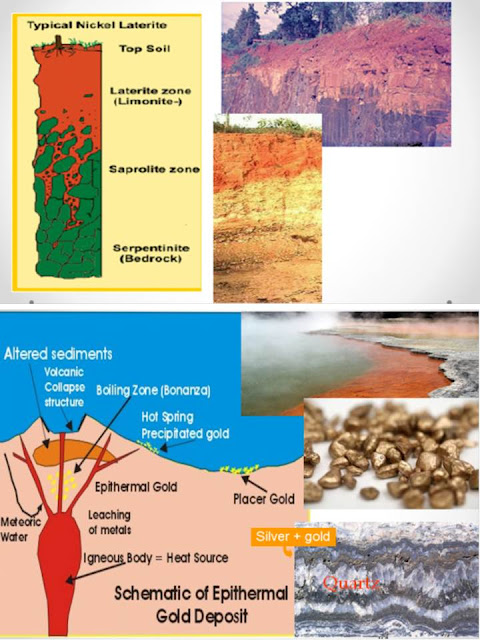 No mining, no modern life. No cell phone, no tv, no computer, no internet, no electricity, no cars, no bicycles, no buildings, no nails and hammer. And yet mining is the most over-taxed sector in the country as if it is a useless activity, as useless as over-politicking.

SC to hear arguments on constitutionality of mining law

Published on Sunday, 24 March 2013 21:01
Written by Rene Acosta / Reporter
THE constitutionality of Republic Act (RA) 7942, or the Philippine Mining Act of 1995, will be scrutinized by the Supreme Court (SC), which is set to hear oral arguments for and against the law.
The High Court has ordered both the government and petitioners to argue their case on April 16, when it will tackle a temporary restraining order sought by two lawmakers against implementation of the controversial law.
The lawmakers have been joined in their petitions by several residents of Davao Oriental province in southern Mindanao supposedly affected by mining activities of Hallmark Mining Corp. and Austral-Asia Link Mining Corp. They and the residents also named as respondent the Department of Environment and Natural Resources (DENR).
In January this year, the petitioners asked the SC to stop the DENR from acting on any application for Mineral Production Sharing Agreements (MPSA) that cover 17,215.4474 hectares of land in the municipalities of Mati, San Isidro and Governor Generoso in Davao Oriental….

MANILA, Philippines - The Supreme Court (SC) will take a second look into constitutional issues regarding Republic Act 7942 or the Philippine Mining Act of 1995 as it tackles petitions of lawmakers against the widely criticized law during oral arguments in court’s summer session on April 16 in Baguio City.

The debate will tackle the legal standing of the petitioners and whether or not the legal questions they raised can be subject to judicial review.

The SC also directed parties to argue on whether or not it could still rule on the case given that it had already decided on a similar case of La Bugal-B’laan Tribal Association vs. Ramos administration in December 2004…

Lastly, the high court wanted the petitioners and respondents to discuss the “alleged adverse effects of mining to the environment, health of the community and human dignity.”
----------