In my blog post the other day, On Inequality and Inclusive Business in HC, I wrote:

On government health spending, I think the ADB, WHO, UN, etc. data on PH public health spending is understated and wrong. They usually count only DOH + PhilHealth spending. They do not include some or all of other govt spending such as:

1. LGUs, with provincial and city health centers and hospitals. Manila City alone has six city-owned hospitals.
2. Philippine General Hospital (PGH), budget about P2 billion a year, part of the UP annual budget; hence, it is not counted as health spending but education spending….

This table is from the World Health Organization (WHO)  which I copied today. It says that the Philippines’ health spending / GDP ratio as of 2010 was only 3.6 percent.

I posted the above observation (in italics) in the email loop among members of the Medicines Transparency Alliance (MeTA) Philippines, where an official of the WHO West Pacific Regional Office (WHO-WPRO), Ms. Klara Tisocki, is among the members.

Klara was kind enough to reply. She said,

Regarding your comments  please note that WHO collects health expenditure related data in countries via the  national health accounts (NHA).  NHA constitute a systematic, comprehensive and consistent monitoring of resource flows in a country’s health system for a given period. NHAs use classification schemes, which are designed to be compatible with those practiced internationally; most importantly, the System of national accounts (SNA), to make cross-national comparisons possible.

The International Classification for Health Accounts (ICHA) is a comprehensive system which classifies NHA into four dimensions: Financing sources (FS)-contributions by different actors; Financing agents (HF)-entities who manage health expenditures; Providers (HP)-entities that provide health care services and goods; and Functions (HC)-types of health care activities. You can read more about NHA at WHO webpage: http://www.who.int/nha/what/en/index.html

More specifically  regarding the Philippines health expenditures these are collected via the Philippines National Health Account  (PNHA)  (which in turn reports to WHO for inclusion of Philippines data in WHO databases).

The methodology and current statistics of PNHA are available on the website of  Philippines National Statistical Coordination Board  http://www.nscb.gov.ph/stats/pnha/.

I would also like to refer you to the technical notes,  http://www.nscb.gov.ph/stats/pnha/technotes.asp on sources of data for the Philippines health financing, with regard to  your assumption that WHO, ADB, UN etc. count only DOH and Philhealth spending.  In these notes you will find the detailed description of Data Sources and Estimation Procedures as approved by NSCB Resolution No. 8 Series of 2011, that shows  what data  from which sources  are included under the different sectors and you can see the wide range of data sources considered.

I thanked Klara for her reply as it provided useful links. From the NSCB link, here are the numbers: 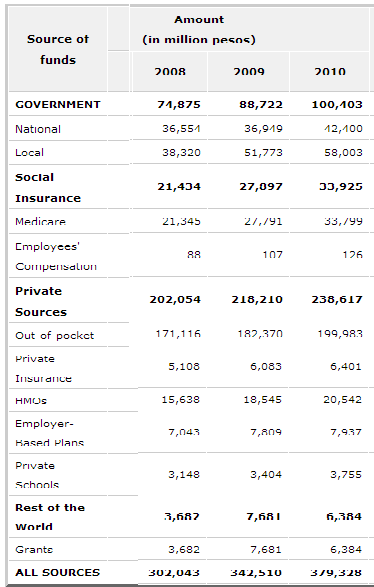 Meanwhile, let us now compute the Health/GDP ratio for 2010:

A 0.1 percent of GDP difference is equivalent to P9.0 billion pesos. So, a 0.6 percent of GDP means P54 billion difference, a substantial amount of money understated in the first computation above.

On another note, I think it's the data on private sector spending that is understated. In particular, charity spending for healthcare is absent in the Table 1. Reiner Gloor of PHAP once mentioned that PHAP Cares Foundation alone gives away about P100 million a year in free medicines to various recipients, national-local governments, communities in disaster areas, NGOs, etc. Then Unilab and other PCPI member companies should also have several million pesos per year of free medicines given to charity.

In many civic and professional organizations like Rotary, healthcare is a big project for many clubs. Last year I attended one rotary meeting of District 3830 on the Gift of Life (GOL) program, donation for children with congenital diseases (CGD). In just about 20 minutes of asking for donation, they were able to raise P1.2 million. And there were other late pledges. All the money was set aside for poor patients of the Children's Hospital in QC. 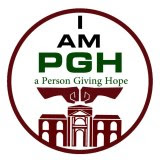 There is also a new initiative called I am PGH – a Person Giving Hope. A fund raising project for poor patients at the Philippine General Hospital, initiated by a friend, JB Baylon. From the photos and stories posted by JB, many people are giving to the project. The facebook page is  http://www.facebook.com/iampgh?fref=ts

Then many private hospitals also have their own charities, giving healthcare for free to limited patients who are really poor. This is in the form of non-revenues to the hospital.

So I think the data on Private Sources in Table 2 is understated as there is no mention and numbers associated with “charity spending” and this can be a big amount.

Could it be that this charity spending, when properly accounted, would raise the Philippines’ H/GDP ratio close to 5.0 percent and not just 4.2 percent as recomputed above?

If so, there are serious implications in public health policy. Among these:

1. The main issue is not “underspending in health” as the 5.0 percent of GDP as recommended by the WHO seems to have been almost attained. The bigger issue is waste and inefficiency in the use of those funds, especially tax money.

3. Certain government personnel are over-protected in healthcare. Like those in the House of Representatives, Senate, AFP, PNP, other big agencies. Here, they have three levels of direct subsidized healthcare: PhilHealth + HMO + in-house medical and dental clinic with free medicines, if not their own hospital.

4. Government itself then, has become a big propagator of healthcare inequality. Many government personnel have such three levels of HC while many ordinary people do not even have one.

Related to #2 above, a friend, Vanni Villafuerte, commented,

Hi 'Noy, i just remembered a procurement guy from WB reviewed the medicine warehouse of LGUs. Only Marikina passed the test! CamSur practically wasted 100 million pesos worth or meds. by not using it before the meds expired. multiply that by the number of provinces that we have. that would be mind-boggling, how much meds is wasted because of poor handling of medicines (temperature, etc.)

I remember that presentation by a WB consultant during the MeTA National Forum in January 2009. I actually got angry listening to his presentation. He showed photos of some LGUs’ medicine storage – where rats, cockroaches, dirt, useful and expired medicines mixed up in one room. The personnel in charge of such medicines storage could not tell which of those medicines were already expired and which ones were still useful. The LGUs simply gave away free medicines from time to time, mostly to their political supporters. Or medicines were left to expire or deteriorate as the LGUs do not have temperature control for those medicines, not air-conditioned or at least kept from noontime temperature especially on weekends where electricity supply in many rooms are shut off.

Not “more taxes for healthcare” unless those wastes and inefficiencies are addressed and corrected. Otherwise, we will only be throwing more money to problems that create more new problems.
----------

what kinds of meds were wasted?

have you taken a look? i think you'll find that they correctly calculated it.