* This is my article last week in TL online magazine,
http://thelobbyist.biz/index.php/perspectives/less-government/item/141-taxi-and-corporate-branding
--------- 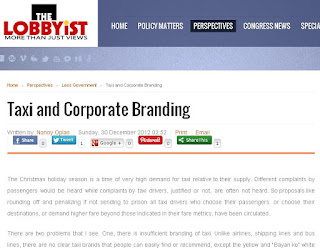 The Christmas holiday season is a time of very high demand for taxi relative to their supply. Different complaints by passengers would be heard while complaints by taxi drivers, justified or not, are often not heard. So proposals like rounding off and penalizing if not sending to prison all taxi drivers who choose their passengers. or choose their destinations, or demand higher fare beyond those indicated in their fare metrics, have been circulated.


There are two problems that I see. One, there is insufficient branding of taxi. Unlike airlines, shipping lines and bus lines, there are no clear taxi brands that people can easily find or recommend, except the yellow and “Bayan ko” white airport taxi whose routes are restricted to and from the airports.
Two, fares are uniform and government regulated, there is no leeway to adjust fares to reflect seasons of high and low demand for taxi service.

These problems are interrelated so the general solution is to have more brand competition and less government intervention. How?

One, allow corporate branding of taxis. In buses, Victory bus, Five Star bus, Ceres Liner, others, they have hundreds or even thousands of buses and only one corporate brand. If a bus driver misbehaves and got involved in a road accident, people and government authorities demonize the bus line not just the driver. So the bus companies really discipline and motivate their drivers as their action or misdemeanor directly reflects on the bus company’s brand and credibility.

Certain bus lines offer special buses on certain destinations – few and wide seats, long legroom, with toilet, only one stop for meals – and they charge higher fares. The same should apply for taxi companies. More market segmentation will solve many supply problems, and taxi drivers will be motivated to become courteous and efficient so they can be hired someday by these high end taxi companies. The single fare system kills innovation.

On another note, when I was in Hong Kong last November, I saw this cab driver. 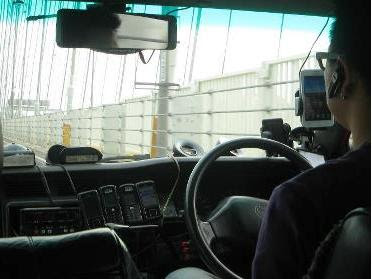 He has four small cell phones to his left, a Samsung galaxy to his right, all are open with five different cords attached to his ear phone. He switches from one cord to another to receive each phone call or make a call, without holding or touching any of those phones, without taking his eyes off the road. Below these four small phones is the sixth gadget, an iPad that he can open anytime.

Fantastic driver. He looks sharp. He talks fast, he switches the cords from one cell phone to another fast, without taking his eyes off the road. So he is able to communicate with his family, friends, or his taxi company anytime anywhere while doing his job. The iPad I think, he will open when he stops to eat or pee, and open his facebook or twitter. I just do not know how common this is among Hong Kong taxi drivers.

One possibility is that he is not an ordinary cab driver, he could be the dispatcher or even the owner of the taxi fleet. In some developed countries where labor is scarce, a taxi company pays any  driver who accepts to take calls and picks up passengers as instructed.

He could be the dispatcher or company owner as he does not appear like an ordinary taxi driver, more of an owner-driver.

In contrast, when we flew back to Manila and got out of NAIA/Manila airport and took the yellow airport taxi, as soon as we got out of the terminal building, the driver said his meter machine is not working and suggested that we will just negotiate the fare when we reach our house. I insisted that he put on the meter reader, he did and it indeed was shabby. When we got home, he produced a receipt from his meter reader, it said P298 for a 6.7 kms distance. His meter reader is tampered, I usually pay only P200 for that short distance on a yellow cab. He later agreed to a P200 fare.

A passenger that feels cheated by the driver of any of the two accredited taxis at the airport, the yellow and white taxi, can complain to NAIA later, but that is waiting for the NAIA authorities to act on the erring driver/s, assuming that they will act on a complaint. A more active, more public-friendly option is to allow passengers to boycott and blacklist a particular brand and go to another brand. In the current duopoly airport taxi system in the country, this is not possible. Passengers simply have to prepare extra cash in case they get cheated, although this does not happen all the time.
-----------

in HK, was that taxi branded also?


Great Content.I have appreciate with getting lot of good and reliable information with your post.......
Thanks for sharing such kind of nice and wonderful collection......again, beautiful :) I love reading your posts. They make me happy .
Get all points airport service