Climate Tricks 21: Arctic Ice Will be Gone This Year?

See how alarmist and idiotic the anthropogenic global warming (AGW) and "man-made" climate change (CC) religion is. In December 2007, BBC reported this, quoting Profs. Maslowski and Wadhams of the US, http://news.bbc.co.uk/2/hi/7139797.stm 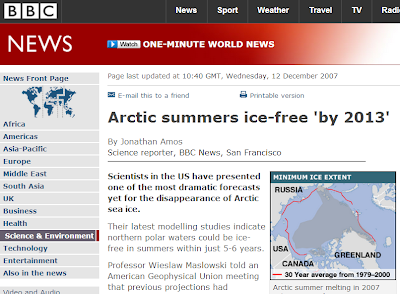 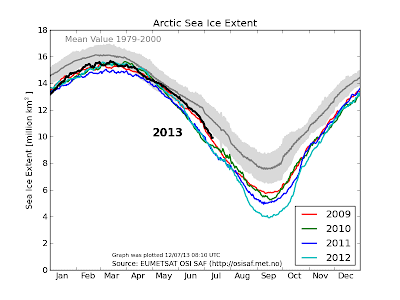 It is now summer 2013 in the Arctic, and there are some 9 million sq. kms. of ice there as of July 12, 2013. (PH's total land area is 0.3 million sq.kms.), data from the Danish Meteorological Institute (DMI), So all those wide ice will melt in the next two months, wow.
http://ocean.dmi.dk/arctic/icecover.uk.php 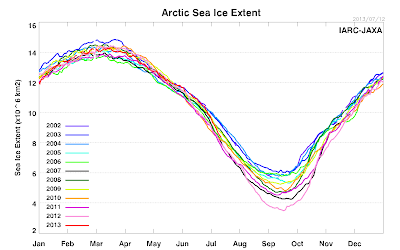 Here's from Japan Aerospace Exploration Agency-International Arctic Research Center (JAXA-IARC), as of July 13, 2013 or yesterday, some 8.5 million sq. kms. of ice, or about 28x total land area of the Philippines, http://www.ijis.iarc.uaf.edu/seaice/extent/AMSRE_Sea_Ice_Extent_L.png 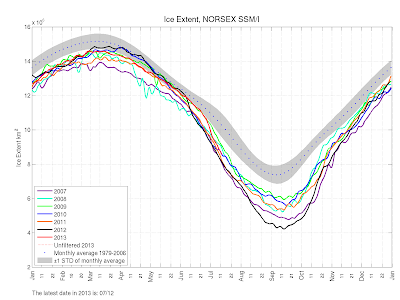 Or from Norway's Nansen Environmental and Remote Sensing Center (NERSC), as of July 12, 2013. Their data/chart indicates less than 9 million sq. kms. of sea ice. Like the previous graphs, the extent of ice there varies from year to year, +/1 0.5 million sq. kms. for each period, but the there are no "outliers", say 2+ million sq.kms. larger or smaller than the previous years.
http://arctic-roos.org/observations/satellite-data/sea-ice/observation_images/ssmi1_ice_ext.png 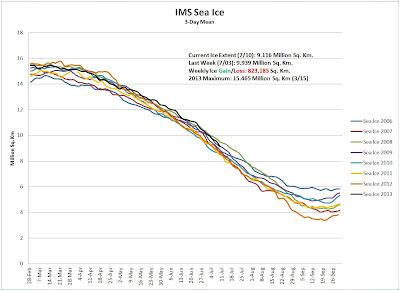 Or from the US' National Oceanic and Atmospheric Administration (NOAA) – National Ice Center, 9.12 million sq.kms. of Arctic ice as of July 10, 2013. They show weekly updates, unlike the above three sources that give daily updates, Nonetheless, the range of data among those different government agencies do not divert too far from each other. http://www.natice.noaa.gov/ims/images/sea_ice_only.jpg

Another proof that many if not ALL projections of AGW and "man-made" CC are simply alarmist and stupid. Warming leaders in the Philippines like Tony la Vina, Heherson Alvarez, Lucille Sering of the Climate Change Commission (CCC), the WWF, Greenpeace, others, they can keep fooling the public of an "ever warming" planet and get all the junkets and climate rackets.

Even the University of the Philippines (UP) signed an MOU with CCC for disaster risk reduction papers from an ever-warming planet. 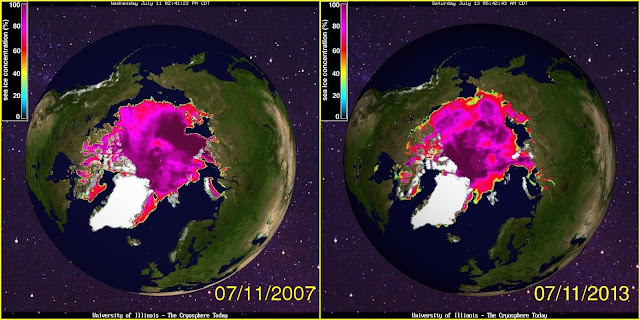 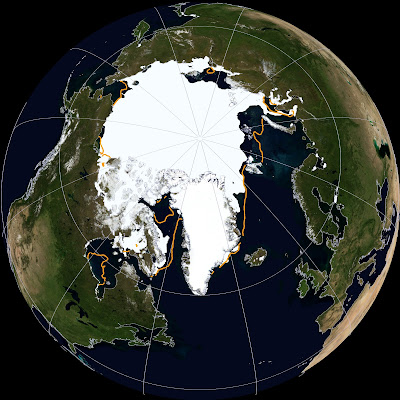 Almost all of Greenland, big portion of Canada, parts of Iceland and Norway, still covered with ice as of this week. And some climate alarmists say they should be zero this summer 2013, tsk tsk tsk. loose nuts.


Arctic and Antartica ice, they melt and grow every year, for decades and centuries, in natural and cyclical pattern. It is "nature-made" melting and growing of ice, nothing alarming except alarmism itself. The lowest for Arctic ice melting happens between September-October every year, the ice can be as low as around 3.8 million sq kms (about 13x the total land area of the Philippies) but that's the "worst" that can happen. After that, the ice grows again, peaks between March-April every year, the Arctic ice can be as wide as 15 million sq.kms. This cycle is repeated every year, for centuries, for millions of years. Only the area changes but the up-down-up-down cycle in ice extent never changes. So statements like "ever-declining ice" to imply that the ice does not grow again within the year are simply idiotic and stupid.

Once again, the BBC, along with the NYT and many big media outlets, they play tango and cha-cha with political science corruption masquerading as climate science, by the UN and many governments, even many universities. They keep fooling the public for huge tax money involved and and endless global climate junkets.