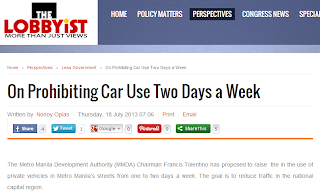 Metro Manila Development Authority (MMDA) Chairman Francis Tolentino has proposed to raise the prohibition in the use of private vehicles in Metro Manila’s streets from one to two days a week. The goal is to reduce traffic in the national capital region.

Public outcry and disapproval, especially among car owners, and more particularly from those who have only one car, was high. The message is simple: Prohibiting people from using their own car/s two days a week is wrong. Especially if such car is used for business or to transport kids to school.

The  MMDA and many local government units (LGUs) in the country tend to specialize on having more  prohibitions in society: Driving your own car is not allowed on this day and hours, prohibited to drive on yellow lane, prohibited to make a left turn or U turn on certain streets, prohibited to drive your diesel engine car or van unless you pass their arbitrary smoke emission test.

The twice-a-week-car-ban proposal will actually result in more traffic congestion because (a) the rich will simply buy additional cars to go around the coding, and (b) there will be a new problem of lack of parking for many houses and streets.

A proposal like this by the MMDA Chairman is anti-liberal and anti-freedom. He is pulling the liberal PNoy government towards more statism, more prohibitionism and hence, more stupidity. Mr. Tolentino should remember that he is working under a liberal government, not a socialist or fascist government.

In a free society, everything is allowed, except for a few prohibited act -- like murder, stealing, abduction, rape, extortion, arson and carnapping. In an unfree society like a socialist or fascist government, everything is NOT allowed, except those with government permits. We are far from that highly unfree society, but more prohibitions, more regulations and more restrictions thinking by certain government officials can slowly pull the country towards such unfree society. And we pay more taxes and fees to pay for the salaries and perks of people with dictatorial and prohibitionist thinking in  government.

The usual proposal coming from various sectors  is to (a) encourage people to take the bus, jeepney and train more often. Raise the MRT/LRT fare prices and buy more trains. Other proposals include (b) building more covered walkways, (c) suspending the approval of new bus franchises or retiring old public vehicles, and (d) requiring provincial bus lines to stop, load and unload passengers only in areas near the North and South Expressways and prevent them from using Edsa.

One problem of expecting people to leave their cars at home and use the bus/jeepney/train  is that many people live in villages and residential areas far from the bus/train route. So from their houses, they take (1) tricycle, then (2) jeep or bus, then/or (3) MRT/LRT, then (4) jeep again or walk long to destination, especially in major commercial business districts (CBDs). The inconvenient multi-ride system, especially if one is regularly carrying a laptop or important documents or big cash, or in decent corporate attire, is forcing some people to drive their cars, even if they have to endure heavy traffic and difficulty in finding safe parking, or expensive parking fees.

A friend suggested that imposing frequent car bans is attacking the traffic problem on the demand side, when what are lacking are solutions on the supply side. One such solution is to construct more bridges over or across the Pasig River, to provide alternative routes to existing roads and bridges across the river.

I  support this proposal. There are currently about six or seven bridges across Pasig River. If there will be twice that number, then the traffic pressure in existing bridges like those in Pasig, C5, Edsa, Rockwell, Makati Avenue, etc. will be drastically reduced and vehicles will be more dispersed.

There is an existing alternative now, the air-con vans. They ferry passengers from residential areas to different destinations, particularly Makati, Manila, Ortigas, Eastwood, Fort Bonifacio and other major CBDs. Just one-ride instead of three or four.

One problem here is that getting a franchise is very bureaucratic and costly, hence the presence of so many unregistered vans or "colorum". These are subject to frequent flag down and extortion by some corrupt elements of the police, MMDA and the Land Transportation Office (LTO). These costs -- high franchise fees for registered and high extortion for unregistered -- make the fare rather high, but still cheaper compared to driving one’s car.

On expanding the coverage and capacity of MRT and LRT in Metro Manila, Peter Wallace once said that the Avenida/Quiapo to Fairview MRT has been submitted to the government at build-operate-transfer (BOT) or related schemes as far as 20 years ago or longer. But the NEDA Board and the Investment Coordinating Council (ICC) bureaucracy, plus changes in administration, have conspired so that such unsolicited proposal from the private sector at little or no initial cost to taxpayers would remain as plain  dreams and never implemented. It is a disease of central planning at the ICC level.

The tricycles are given monopoly routes by the LGUs. Jeepneys and air-con vans  are not allowed to pick up passengers in routes that were assigned  by the LGUs as "exclusively for tricycles." So people who live in these routes have only three options: drive their car, get a taxi, or take the tricycle. The first two are costly.

If such tricycle route monopoly is absent, meaning passengers have a choice  to take jeepneys/vans or tricycles, most likely they will take the former and tricycles will die a natural death, even without national or local legislation. But the LGUs are protecting the tricycle monopoly system as they get lots of votes from tricycle drivers and operators, and these people pay annual registration fee or franchise fee to city/municipal halls.

A complicating situation is that some debt-pusher institutions like the Asian Development Bank (ADB) contribute to such traffic congestion by pushing some lousy programs, like the $300 million e-tricycle loan. Even a small country like Singapore with just 5+ million people has no tricycle, the more that a country with nearly 100 million people should have no tricycles and have more buses and trains instead.

To recap, this paper is suggesting alternative measures other than the current and expanded car bans:

1.       LGUs should consider removing the monopoly route system for tricycles, allow jeepneys and air-con vans to serve these routes as well.
2.       Build more bridges across Pasig River.
3.       Simplify and reduce the cost of registering air-con vans, encourage corporate branding and competition among them.
4.       Simplify the approval of new or expanded MRT/LRT lines.

There are many other proposals from many sectors. So long as they do not advocate more restrictions, more prohibitions by governments on people to use their own cars, such proposals can be worth supporting.
---------------