UHC 17: First, Second and Third Lines of UHC for the Poor

Later today, I will attend a round table discussion on Health System Shapers (HSS), Patients and Consumers Sector, at the Department of Health (DOH) main office. The goal of this and related fora is to further fine tune the government’s universal health care (UHC) goal.

Last week, I also attended the two-days (July 25-26) “Policy Dialogue on UHC and Access to Medicines “ held at the Asian Institute of Management (AIM) in Makati. Here are two of the definitions or presentations about UHC. 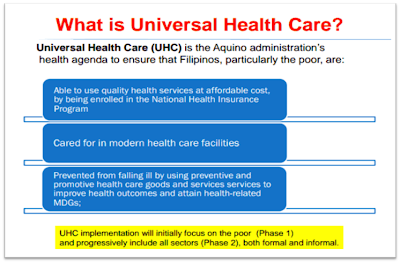 This one is from DOH UnderSec. Madeleine “Madz” de Rosas Valera in her presentation, “The Philippine Response to Universal Healthcare and Access to Medicines 2013”. She added that UHC is one of four major social investments of the government to help the poor. The other three are public education, housing and conditional cash transfer (CCT).

And this one is from Dr. David Lee of Management Science for Health (MSH) in his presentation in the same forum last week, entitled “Medicines as Part of Universal Health Coverage: The Global Dialogue” 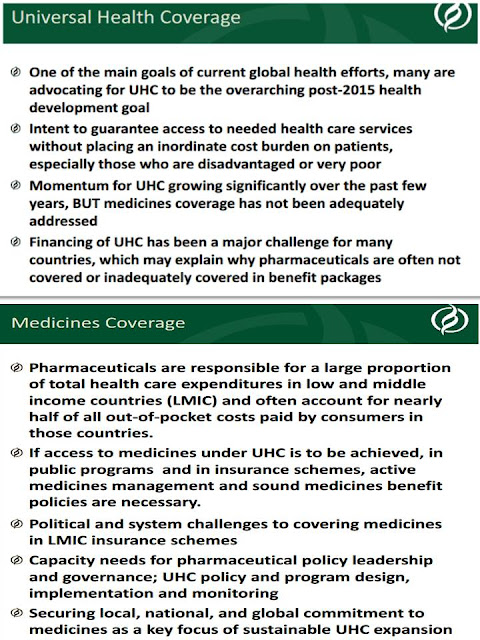 Pondering on UHC, I think the health sector already has among the monster budget in the country today. Consider the following:

* I saw the DOH presentation last year for its 2013 budget, they were spending on a P42B approved budget, now it has been revised to P34 B? What happened to the P8 B? Can an approved budget still be slashed? Weird… will ask around why.

Should be P300+ B next year alone? And that’s for government spending alone.

I am wondering if there was any study conducted by the UHC study group (UP Manila), Health Policy Development Program (HPDP, UPSE + UP Manila + other colleges?) or other groups, detailing how much really is spent by the public sector alone yearly, on healthcare?

It seems none, except that every year, there is belief that there is  "not enough money, give more money, raise more money, to public health."

I think ALL foundations and private charity organization have health spending in one way or another. Plus extra spending during calamities, like individuals donating money or medical products and devices.

So we are talking of possibly P500+ billion health spending in one year alone?

And many people still think that health spending is still "not enough". hmmmm...

The first line of UHC for the poor are the RHUs, BHS, and LGU hospitals. The second line will be the DOH hospitals, Philippine General Hospital (PGH), other state universities’ hospitals, AFP hospital, other departments’ health facilities. Plus the charity emergency/wards of private hospitals. That is for outpatient services (have fever, or headache, stomach ache, then go home after consultation) and wards in case of confinement.

PhilHealth should be considered as a third line in UHC of the poor. Yet PhilHealth is the main discussion point when people talk about UHC.

PhilHealth is NOT a healthcare provider, unlike those RHUs, BHS, LGU hospitals. PhilHealth is only a health financier, for those who are hospitalized, and assuming that they were not technically disqualified, say they forgot to pay the premium last month or a few months back. Or they are unmarried couple.

So the focus on expanding PhilHealth coverage may be a secondary consideration compared to improving the healthcare delivery of those RHUs, BHSs and LGU hospitals.

As an advocate of minimal government involvement, in healthcare in this case, I maintain that PhilHealth membership should not be made mandatory and obligatory for all people. What should be made mandatory is that all people, children especially, should have health insurance – whether from private charity organizations and foundations, or private HMOs, or some health NGOs, or LGU schemes and hospitals, or from PhilHealth.

The majority decision and sentiment is the opposite. They want further centralization and nationalization of healthcare via expanded PhilHealth membership and higher premium.

Nonetheless, I will keep writing and expressing my personal opinions on this subject.

Meanwhile, here's a comment from Leonie Ocampo, President of the Philippine Pharmacists Association (PPhA), after I shared my previous blog post on this subject. Thanks Leonie.

...I only hope that DOH will really be serious in looking into and implementing new processes in the Procurement system, and as the Arm of the Government in the Promotion of Health and Well-being of every Filipino, it will put its HANDS (the IRON HANDS) not only in its different CENTERS' procurement but also of the LGUs. I understand the LGUs are not within the umbrella of DOH, but ways for DOH to oversee LGUs procurement system MUST BE DONE. If this needs a Law or an E.O. to happen, it must be lobbied for.

One topic as you mentioned is on Antimicrobial Resistance but everyone especially our Government's system of supplying Antimicrobial to the Filipinos is the very CAUSE of this AMR, not only as a problem but already as a Public Threat. This is not to mention the rampant irrational use of these Antimicrobials due to irresponsible dispensing of drugstores manned by UNTRAINED salesclerks whose orientation is only to make sales not minding of the risks the buyers face in taking the medicines.

Another problem to look into is also the distribution of the COMPACKS. I hope we will not waste our limited resources to again allow irrational use, misuse and abuse of this.

A lot more to be looked into and I am positive with the Leadership in the DOH, PHILHEALTH, FDA and other agencies involved in the medicines use and healthcare delivery, SOMETHING BETTER will happen.