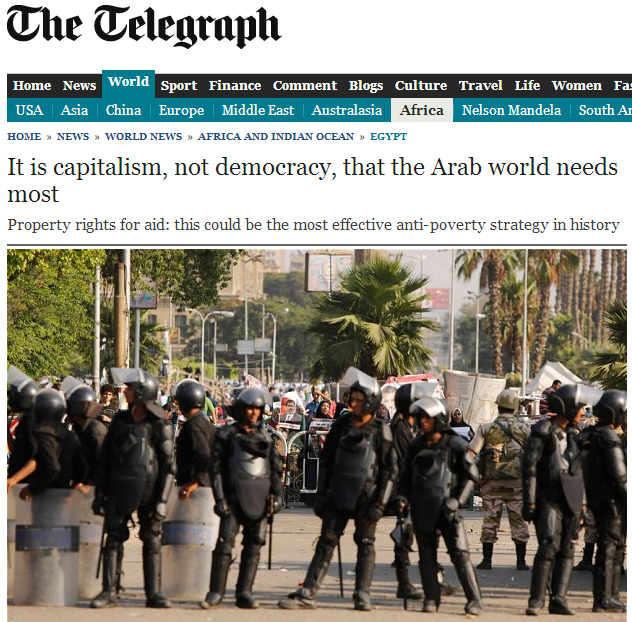 To watch events in Egypt is like seeing a videotape of the Arab Spring being played backwards. The ballot box has been kicked away, the constitution torn up, the military has announced the name of a puppet president – and crowds assemble in Tahrir Square to go wild with joy. The Saudi Arabian monarchy, which was so nervous two years ago, has telegrammed its congratulations to Cairo’s generals. To the delight of autocrats everywhere, Egypt’s brief experiment with democracy seems to have ended in embarrassing failure.

Normally, Western leaders would be lining up to deplore a coup d’etat, but yesterday even William Hague seemed lost for words. As a rule of thumb, he says, Britain prefers civilian rule. But when asked to condemn the Cairo coup, he declined. The Arab world’s Twitter accounts, once full of revolutionary optimism, have turned into a depository of despair. “Egypt has taught me that democracy is a lie and an elected president is a myth,” wrote Ahmed al-Husseini, a Sunni preacher from Bahrain. “No parliament, no elections, no ballot boxes. All lies.”

He has a point. Egypt’s election turned out to be like an Irish EU referendum: voters could give any answer they liked, as long as it was the right one. The army didn’t like how things were going, so it has asked voters to choose again. While the West was celebrating Egypt joining the comity of democratic nations, Egyptians themselves were sliding into an economic abyss, with terrifying shortages of fuel, food and security. Sectarian violence has been thrown into the mix, with persecution of the Coptic Christians followed by Sunni v Shia strife. The murder rate trebled. Things were falling apart, which is why the generals were welcomed back.

But the Arab Spring was a demand for freedom, not necessarily democracy – and the distinction between the two is crucial. Take, for example, the case of Mohammed Bouazizi, who started this chain of events by burning himself alive on a Tunisian street market two years ago. As his family attest, he had no interest in politics. The freedom he wanted was the right to buy and sell, and to build his business without having to pay bribes to the police or fear having his goods confiscated at random. If he was a martyr to anything, it was to capitalism.

All this has been established by Hernando de Soto, a Peruvian economist who travelled to Egypt to investigate the causes of the Arab Spring. His team of researchers found that Bouazizi had inspired 60 similar cases of self-immolation, including five in Egypt, almost all of which had been overlooked by the press. The narrative of a 1989-style revolution in hope of regime change seemed so compelling to foreigners that there was little appetite for further explanation. But de Soto’s team tracked down those who survived their suicide attempts, and the bereaved families. Time and again, they found the same story: this was a protest for the basic freedom to own and acquire ras el mel, or capital.

Bouazizi killed himself after police confiscated all his fruit and a pair of second-hand electronic scales. This was all he had. He was a gifted trader; he had hoped to save enough money to buy a car and grow his business. On the face of it, losing some fruit and a £100 pair of scales seems like an odd basis for suicide. But having made enemies of the police, Bouazizi realised he would not be allowed to trade again. His family say he felt his life had ended and that, if he died for any cause, it should be that the poor should be able to buy and sell.

For most of the developing world, no such right exists. In theory, everyone is protected by law. But in practice, the process of acquiring a legal licence is so riddled with bribery and bureaucracy that only a small minority can afford to go through with it. To de Soto, this explains much of world poverty. Step out of the door of the Nile Hilton, he says, and you are not leaving behind the world of internet, ice machines and antibiotics. The poor have access to all of these things if they really want it. What you are leaving behind is the world of legally enforceable transactions of property rights. These traders do not really break the law – the law breaks them.

Take Fadoua Laroui, a Moroccan mother, whose suicide was filmed. She explained her reasons before setting herself alight. “I am going to immolate myself,” she said. “I am doing this to protest against hogra and economic exclusion.” Hogra means contempt towards small traders, the contempt which Bouazizi was shown by the police. A similar story was told by the survivors, and the relatives of the deceased. As Bouazizi’s brother explained to de Soto: “People like Mohammed are concerned with doing business. They don’t understand anything about politics.”

Technically, the law covers everyone. But under Hosni Mubarak, for example, opening a small bakery in Cairo took more than 500 days of bureaucracy. To open a business in Egypt means dealing with 29 government agencies. The same story is true throughout the region: the average Arab needs to present four dozen documents and endure two years of red tape to become the legal owner of land or business. If you don’t have the time or money for this, you are condemned to life in the black market: no matter how good you are, you will never trade your way out of poverty. Arabs are so angry about this that they are burning themselves alive.

William Hague said yesterday that Egyptians want the freedom to express their views and choose their governments. Stability, he said, “comes from democratic institutions”. Yet there has been depressingly little evidence of this stability in democratic Egypt – as the Saudis are gleefully pointing out. This sets a terrible example to other fledgling democracies: that if things get tough, the army can eject the government and start again. Whoever follows Mohammed Morsi as president will know that, in effect, he serves at the pleasure of the military.

A few weeks ago, de Soto told the US Congress that the West has fundamentally misread the Arab Spring and is missing a massive opportunity. Bouazizi, and the five Egyptians who self-immolated, spoke for 380 million Arabs who lack property rights or any legal protection. This applies to Britain: if we were to become champions of these people, and demand the extension of property rights in return for our foreign aid, it could be the most effective anti-poverty strategy ever devised. And it might make us millions of new friends in the Arab world.

This is not a new idea, but the revival of an old one. As Margaret Thatcher once put it, “being democratic is not enough – a majority cannot turn what is wrong into right”. Freedom, she said, depends on the strength of the institutions: law and order, a free press, the police and an army that serves the government rather than supervises it. History is proving her right – in Russia, Afghanistan, Iraq and now in Egypt. The façade of democracy can be horribly deceptive; it is the strength of institutions that decides if nations rise or fall.

Fraser Nelson is editor of 'The Spectator’