Population Control 18: Billions of RH Services Even Without an RH law 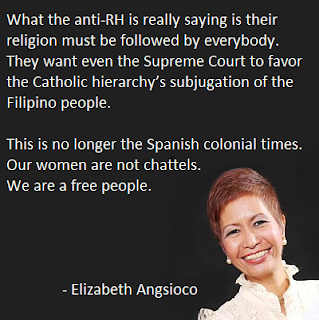 Ako naman Butch, Ethell, anti-RH but for zero religious reason, pure econ and pol philosophy lang. No one prohibits people from donating their own resources to distribute condoms, pills, etc. for free to the poor. Gawad Kalinga (GK) or Books for the Barrios (BftB) or Rotary Homes, etc. did not say that they needed a GK bill or BftB bill to become a law first before they will build a single house or distribute books to the poor. If people help, fine. If not, fine too. And maternal care, child care, is part of the DOH, UP PGH, AFP hospital, LGUs hospitals, PNP hospital, etc etc mandates, nothing new.

Someone has a "very bright" idea. That he will give a big portion of his wealth to people in calamities like victims of heavy flooding. But he needed a law first, say a "Calamity assistance law" with fines, penalties and imprisonment provision, for those who do not help during calamities, before he will help. That is one example of a lousy thinking, but that guy thinks his idea is "very bright" and must be imposed on everyone else in the country via a law from congress.

No budget to support programs mean it will just fail. That money is called investment in a better future --- one that has less mouths to feed and more sustainable. Saying no money shd be spent for it is like not willing to put into roads and education. Pretty short -sighted.

By calling my idea “short sighted”, I returned the favor and made these counter-comments.

People are liabilities, thus there should be "less mouths to feed" is another stupid and short sighted statement. Those bus and taxi drivers, office workers and pub school teachers, yayas and drivers of the middle class and the rich, etc., many of them come from households with 5 or more children, they are "surplus" and hence, "unwanted children" because they come from "unwanted pregnancies." Yeah, those people should have never been born.Lousy and idiotic thinking.

Many people are ignorant of numbers and they just want to open their loud mouth because of emotionalism. The 2013 DOH budget of P52 B was approved in Dec 2012 or one year before the RH bill became a law, Dec. 2013. In that 2013 budget, DOH already included P2.539 billion for various RH services alone, of which P538 million is for FP supplies and contraceptives alone -- even without an RH law.
http://funwithgovernment.blogspot.com/2012/09/health-spending-6-dohs-proposed-2013.html 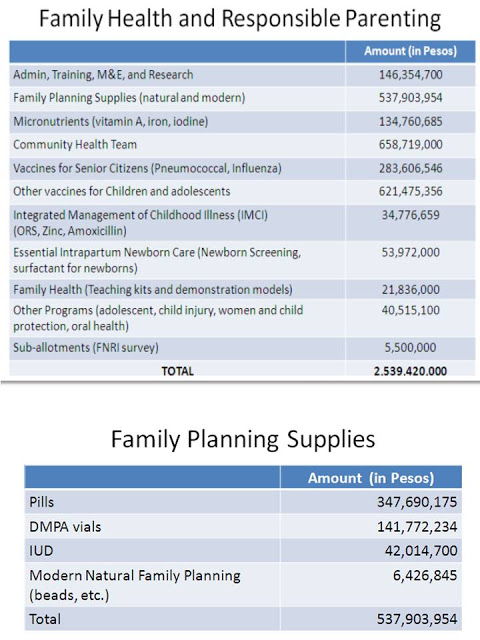 LGUs also have their own RH services in their respective provincial and city hospitals. PGH has RH services in its P2 billion annual budget -- even without an RH law.

No counter-argument from him. I also posted the first comment on other rabid RH campaigners like Tonton Contrereas of DLSU and Oscar Picazo of PIDS. Tonton replied,


The state has an obligation to spend for women's health because it is their bodies that are worn out just to reproduce future members of the labor force and to think that most of the work they do rearing these future workers are not being paid by the capitalist system. Put that in your equation Nonoy Oplas.

Take the DOH 2013 BUDGET, approved in Dec. 2012 or one year before the RH bill became a law. Of the P52 B total budget, P2.539 billion alloted for various RH services alone, of which P538 million is for FP supplies and contraceptives alone -- even without an RH law.
http://funwithgovernment.blogspot.com/2012/09/health-spending-6-dohs-proposed-2013.html


And you mentioned the capitalist system, among my favorite topics J. Capitlaism gave us facebook, youtube, google, yahoo, twitter, samsung, apple, black berry, cars, buses, restaurants, hotels, private schools and universities. Capitlaism is a wonderful system, it creates revolutionary products and services that even socialists or other anti-capitalist groups so love and patronize. It gives jobs to people, and people feed their children. What looked like undernourished or underclothed children running in the streets will soon be the bus/taxi/office/familyi drivers, office workers, yayas for kids of people including the anti-capitalism ideologues, NGOs, media and academics alike.

That is why people are assets. More people, more assets. The real liabilities -- thieves, murderers, rapists, extortionists, kidnappers, land grabbers, etc. -- rich and poor, in private or public offices, government should get them. That is the main purpose of having government, to protect people from those criminals, especially the armed and organized ones.