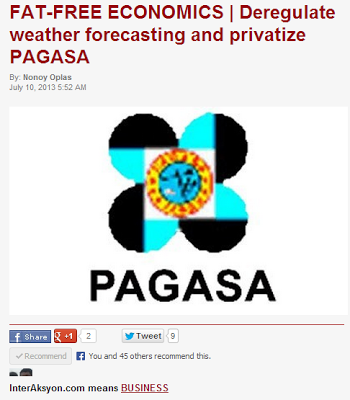 This may sound like a “politically incorrect” statement so let me explain why.

One, there is no market failure in providing the service as the scientific and technical know-how to gather data and interpret them can be done by private enterprises. Weather forecasting need not be an exclusive function of the government.

There are several independent weather analysts in the country that often have better analysis than the Philippine Atmospheric Geophysical and Astronomical Services Administration (PAGASA), and they charge the public nothing. These guys get raw data from the meteorological agencies of Japan, Korea, Hong Kong, Taiwan, Hawaii/US, etc. They charge zero because they also get their raw information for free.

But once they charge for their services, private weather forecasting enterprises must produce value added over the free forecasts of those meteorological agencies of other countries. They must invest in modern equipment and tools, and get more trained meteorologists, oceanographers and climatologists to do more detailed analysis of short- and long-term trends in weather and climate.

Since these companies and institutions are in for the long haul, they will be interested to see long-term perspectives on climate. Like how long will the current global cooling last, its effect on national, regional and global food production, tourism, public health and other economic and social sectors.

Three, privatization would put accountability to those forecasts. There will be a private contract between the forecasting service provider and its clients. If the latter made bad business decisions as a result of frequent false forecasts by the former, the forecasting company can be sued, it can go bankrupt and its officers can go to prison. To avoid this, forecasting companies will be forced to upgrade and modernize their tools and interpretation of raw data, and their information dissemination.

In the case of PAGASA, thousands of lives are lost, while billions of pesos of private property are damaged -- such was the case when Typhoon Sendong hit Mindanao two years ago -- because PAGASA failed to see the trajectory of the storm. Have PAGASA officials been sanctioned? Any failed or wrong analysis, or over-reaction (declaring an LPA immediately even if there is none) is a reason for PAGASA to say, "we need more money". So inefficiency is rewarded with more tax money.

PAGASA’s budget has risen through the years. It got P1.20 billion in 2011, followed by P1.28 B in 2012, and P1.46 B in 2013. The bulk of its budget is capital outlay, which means the purchase of more modern equipment and offices, followed by maintenance and other operating expenses then personnel services. The salaries and allowances of its personnel have also risen (see table below). 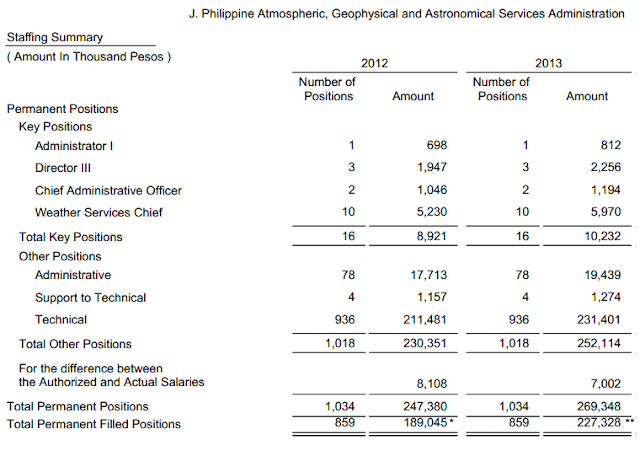 Private weather forecasting enterprises will be penalized if they make frequent bad forecasts. No tax money will be used to put them up or bail them out if they are inefficient. They are under pressure to provide more accurate, regular updates, hour by hour or even every 30 minutes in the case of severe weather disturbances. Each failure in forecast translates to financial losses, not to mention loss of reputation.

In the US, there are at least eight private weather forecasting companies that have private subscribers and make money. These are on top of US government meteorology agencies like the National Oceanic and Atmospheric Administration (NOAA)-National Weather Service (NWS) and the Joint Typhoon Warning Center (JTWC, Hawaii). These private services are as follows:

In UK, I know of one solar physicist in London, Piers Corbyn, who owns a private weather forecasting company, Weather Action. And he often beats the UK Meteorology Office in predicting weather three months or one year ahead. He uses Solar Weather Technique (SWT) in making his predictions, and he gets many subscribers.

Aside from the above reasons, I have a few personal reasons why I want to see a deregulated weather forecasting system in the country, and even a privatized PAGASA.

One, when I got married in Iloilo City several years ago, my siblings and nieces from the nearby island of Negros Occidental were unable to attend. PAGASA foisted signal no. 2 in Region 6, so the Coast Guard prevented all inter-island boats from plying the Iloilo-Bacolod route. But my sister and brother said there was not even rain in Bacolod that day, cloudy but no rain or strong wind. The same in Iloilo.

Ordinary folks can only complain of PAGASA's inefficiency but beyond that, there is nothing we can do. We cannot terminate PAGASA funding nor sue it as there is no direct and explicit contract between the public and that agency. Some people would even say, "Oh, PAGASA made lousy analysis again. Perhaps they need more money, Congress and DBM should give them more money." There is no accountability for a monopoly.

Two, I have long wanted to compare the country's temperature data. For instance, I want to know how June 2013’s average temperature was compared to the same month in earlier years. This data is unavailable in the PAGASA website, nor can it be requested for free. The data is for sale, and one must go to their office in Quezon City, pay and get the official receipt, and wait for about a week to get the data. We taxpayers give them money for their annual operation, and we have to pay them again to get data.

PAGASA will benefit if there are many private weather forecasting companies in the country as it will be forced to be on its toes and so provide more accurate short- and long-term perspectives in weather and climate.