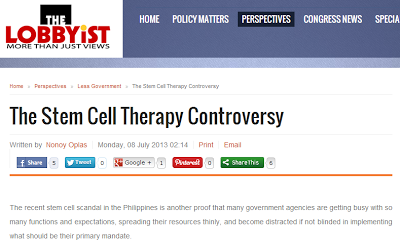 The recent stem cell scandal in the Philippines is another proof that many government agencies are getting busy with so many functions and expectations, spreading their resources thinly, and become distracted if not blinded in implementing what should be their primary mandate.

The Department of Health (DOH) and the Food and Drugs Administration (FDA) are busy with various concerns including those that are better left to the private sector and civil society. And that is how fake – or at least unlicensed and unregistered -- health professionals and medical practices, fake or substandard medicines, untruthful ads on other health products and food supplements, are able to proliferate.
Top of Form

These are products and services that can be fatal to patients, and both the DOH and FDA seem to be weak on this. Concerns like monitoring and implementing politics-driven policies like drug price control, penalizing small drugstores that cannot upload the electronic drug price monitoring system (EDPMS), can distract them from more important function of going after those fakes.

The old controversy on stem cell therapy was once again highlighted when the Chairman of the Dangerous Drugs Board (DDB), Antonio “Bebot” Villar, went public to complain that after undergoing the treatment to improve his condition – weak body, pain in the bones – the opposite happened. He suffered more difficulty in walking after such treatment.

The stem cell "therapy" was (a) done by foreign physicians (German and Thai) assisted by two Thai nurses, and (b) venue was not a health facility but a hotel, Edsa Shangrila Hotel, done last June 9, 2012. He paid Euros 16,000 for that treatment that produced nothing or even worsened his condition.

Foreign physicians – and many other professionals – cannot practice in the Philippines because of the ban provided in the Philippine constitution. This is one ugly aspect of our charter that needs to be amended and removed. That is why those foreign or non-accredited physicians are doing their practices inside hotels or mountain resorts or spas, where they can hardly be noticed by some government regulatory agencies.

I attended the media briefing by the Philippine Medical Assocaition (PMA) at Rembrandt Hotel last Thursday morning, hosted by the Liga ng mga Brodkasters ng Pilipinas Inc. (LBPI). PMA President, Dr. Leo Olarte said that such  treatment is generally safe if (a) done by accredited physicians, and (b) stem cells should come only from humans, from the patient him/herself especially, and NOT from animals, plants, fetus or embryos of dead babies. He suggested that perhaps what those foreign physicians may have given DDB Chairman Villar was just dextrose or ordinary water.

Mr.  Villar put himself in public ridicule because he dealt with those two abnormal circumstances. But  his act of coming out to warn the public against fake stem cell treatment is good and commendable.

There are crooks and opportunists everywhere, poor and rich countries alike. That is why it is important that the main function of the government is to promulgate the rule of law. Strictly implement laws against stealing, murder, abduction, counterfeiting, etc. When government moves into the function of endless redistribution of income and assets, the primary function is often neglected. And that is where criminals strike, they know that government is busy somewhere else.

Like when our policemen are busy flagging down motorcycle drivers without helmets, or their helmets do not bear DTI sticker; or flagging down color-coding cars, or "colorum"vans that transport office workers to their residential areas. When policemen are busy with these shallow and often extortionary concerns, the real criminals -- thieves, pickpockets, murderers, carnappers, kidnappers, etc. -- are relatively free to do their work.

In one report in rappler, it said, "The Philippine Medical Association earlier said 3 government officials died of complications from stem cell treatments done in the country by non-licensed practitioners." The report could be referring to former Congressmen Pedro Romualdo of Camiguin and Aumentado of Bohol, others.

Nonetheless, fake physicians or fake medical practices, fake medicines, they can kill. Or at least they can worsen a patient's condition and hence, make healthcare even more messy and more costly. The DOH and FDA are sometimes clueless that these things are happening more commonly. The DOH for instance issued an order about stem cell treatment only last month, even if these things have been going on for many months or even years.

Government should focus on the rule of law, not on functions that are better left to the private sector and civil society. Drug price monitoring and comparison for instance, is NOT a primary function of the DOH. Even ordinary people themselves can do that -- compare the prices of Mercury vs Watsons vs The Generics vs Rose vs other drugstores. But ordinary people cannot easily detect which medicines are real or fake, which ones can cure and which ones can kill. This function will require laboratory testing, will require lab and medical technologists. That is where the government can ffocus its resources.

Many NGOs, media, politicians and other pressure groups are part of the problem because among their focus is how to demonize the multinational pharma companies. Thus, there are policies like drug price control, EDPMS, IPR and patent tweaking, and so on.  The issue of fake drugs, fake ads in various health products and food supplements, pharmacovigilance and fake medical practitioners often take a back seat.

If existing laws against such fakes are not properly controlled, then more fake stem cell treatment and other illegal medical practices, fake medicines, will happen or proliferate in the country.Bottom of Form