The Library of Economics and Liberty mentioned two of Friedman's work and their importance,

His landmark 1957 work, A Theory of the Consumption Function, took on the Keynesian view that individuals and households adjust their expenditures on consumption to reflect their current income. Friedman showed that, instead, people’s annual consumption is a function of their “permanent income,” a term he introduced as a measure of the average income people expect over a few years.

In Capitalism and Freedom, Friedman wrote arguably the most important economics book of the 1960s, making a case for relatively free markets to a general audience. He argued for, among other things, a volunteer army, freely floating exchange rates, abolition of licensing of doctors, a negative income tax, and education vouchers. 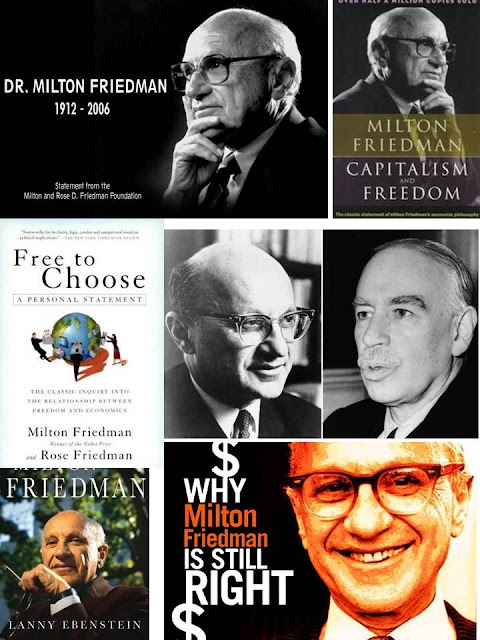 Tonight, the Lion Rock Institute (LRI), Hong Kong's first and only free market think tank formed in 2004, is holding a cocktails entitled "Friedman 101 and His Eastern Europe Experiment." The event was posted by EFN Asia here.

The three speakers tonight are from Ukraine, Australia and Bosnia and Herzegovina.

Congratulations to LRI for holding this event. While there are many other free marketer economists and social scientists who are known today, perhaps none has reached the popularity attained by Friedman for many decades.

One Filipino free marketer friend here, Mark B., always attach some quotes from known free market leaders in his emails.

A major source of objection to a free economy is precisely that it ... gives people what they want instead of what a particular group thinks they ought to want. Underlying most arguments against the free market is a lack of belief in freedom itself.


And rightly so. Free people are not equal and equal people are not free. And the desire to force equality among people via socialism or heavy state intervention, regulations and taxation, will only succeed in having dictatorship and have many dictators. People who dislike spontaneity and diversity, people who are insecure and want to have central planning in almost all sectors of the economy.----------