Another big rally by the leftist group Bayan Muna and other nat-dem allies was made last Monday, July 22, to protest the annual State of the Nation Address (SONA) speech of the President at the House of Representatives in Batasan, Quezon City. The entire north-bound lane of the 10-lanes Commonwealth Avenue was closed by the demonstrators and the big police force blocking them. There was a collision between the two groups that afternoon.

I commented in one friend’s facebook wall that they were “ungas, violent demonstrators.” A certain Paul G. corrected me, posting a news story with video that it was the police who charged first.

I apologized to him and other demonstrators who may be reading that thread, for my earlier comment. But I added that I do not support those huge and confrontational mobilization to air grievances. I wrote,

You have the right to demonstrate but you also deprived ordinary motorists and commuters who use Commonwealth ave. of their right to fast and safe travel. Your "right of expression" is not absolute as other people also have the "right to travel" that a large demonstration has curtailed if not limited. Many classes and business transactions in QC were cancelled that day because of such big demos. These people and students also have the "right to education" and "right to economic transactions" that were curtailed that day.

Paul countered that with a SONA,

I saw the tv footage last Monday morning, around 6am, the demonstrators already occupied the entire north-bound lane of Commonwealth Ave. as they marched from Philcoa. The demonstrators could have lessened the inconvenience to the public, especially to people who do not share their political demands and pol ideology, if they started their march and demo at noontime, instead of early morning. Kung gusto nilang unawain sila ng publiko, dapat mang unawa din sila.  Hindi komo galit sila sa gobyerno, idamay nila ibang tao the entire day. Even already traffic-congested Marikina experienced extra congestion that day because vehicles that were supposed to take the San Mateo and Montalban roads to Batasan then Commonwealth, took the Marikina route. They caused inconvenience not only to QC residents and motorists that whole day.

He countered that they needed understanding as the neoliberal policies of the Aquino government will hit more poor people.

These guys should hear the other side, people who may respect their political ideology but disrespect their methods to propagate it. I oppose socialism and heavy statism, I engage people in some debates, in fb or other online media, in seminars and conferences. People who do not share my views have the freedom to delete or disregard my comments, they have an option. In the case of demonstrators, the only options they give to other people is more traffic or cancellation of their educational, business or personal transactions for one day. Intolerance breeds resentment from others. 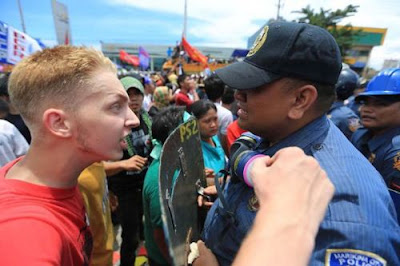 The discussion later shifted to that young European man who was caught on camera shouting at one police officer during the anti-SONA rally. Some people think it was a case of “foreign intervention” in Philippine soil. It is not "foreign intrusion" as it is just an individual's action. 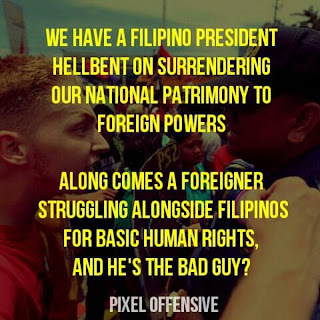 This poster was posted by Paul. See this, that foreigner is struggling "alongside Filipinos" including me? That’s garbage. That young Dutch man is only struggling for himself and his political ideology, and the demonstrators. People have the right to proudly announce their arrogance and intolerance, let it be. If people self destruct, we should not interrupt them. No need to physically harm guys like him. We can broadcast their faces, names and character. There is personal responsibility to each personal action (or inaction).

Paul commented further that “Nonoy… arguing that we should all vanish from the face of the earth because we think differently and act accordingly ... peaceful pa nga kami at practicing what is said in the Consti.”

Intolerant people tend to have poor reading comprehension. Nowhere did I advocate that demonstrators should "all vanish from the face of the earth." I said that they have the "right to demonstrate" but such right is not absolute, it has limit. Anyone can hold plackards and b___t the President or anybody he does not like, in his house. But not in my house or somebody else's house. There are certain limits to the "right to self expression" of people.

Intolerant people cause big disharmony in society. They will force their way, like blocking roads and stop motorists and ordinary passengers, so they can shout what they want to shout. Respect for other people's right to safe and fast mobility is nothing, is useless in their vocabulary. 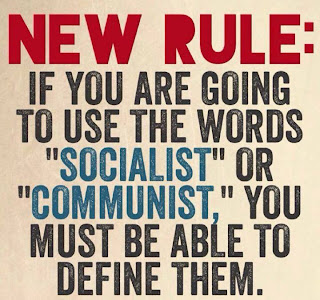 Then he posted this poster. My simple definition of a socialist are those people who want to socialize everything, from education, healthcare, housing, agriculture, factories, banks, our pockets, our savings. No or little private property and savings allowed, most if not all will be forcibly socialized, forcibly collectivized, by the state and the dictators.

A good reading for believers of confrontational politics to advance the Maoist and socialist ideology, 11 pages long, is this, Pilipinas Forum 19: The CPP-NPA, Sison and Maoism

These photos of Thomas van Beersum with CPP founder Joma Sison in the Netherlands, have been circulating in facebook and twitter yesterday and today. 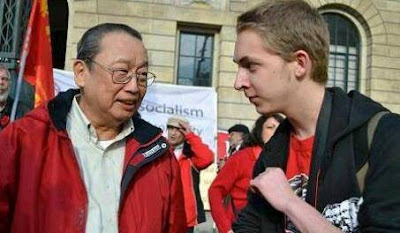 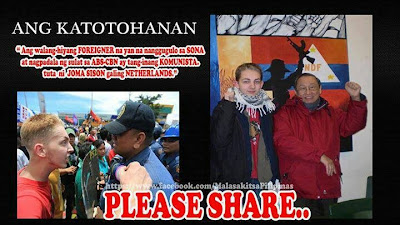