There are a number of positive news in India recently regarding strengthening its intellectual property right (IPR) protection. Among the most recent was the article at The Hill by Mark Elliot, the EVP of the U.S. Chamber of Commerce’s Global Intellectual Property Center (GIPC). He wrote,


The ultimate goal – both for India and for all nations striving to foster economic growth and global competitiveness – is to put in place policies which lay the groundwork for the creation of a true knowledge-based economy.  For that to happen, the government must create guidelines which provide greater legal certainty for private sector investors, create a viable technology transfer mechanism, and foster greater enforcement of legislation aimed at protecting IP-intensive industries in India. Each of these factors, in turn, will support the creation of a robust innovation ecosystem, one from which India surely has the most to gain.


"This is a technology driven era. We are a technology driven society... We are committed to protecting IPR which is essential to fostering creativity," PM Modi said. In May, the US had kept India and China on its Priority Watch List of trading partners that fail to protect intellectual property rights of its enterprises that invest in India, hurting the economy. 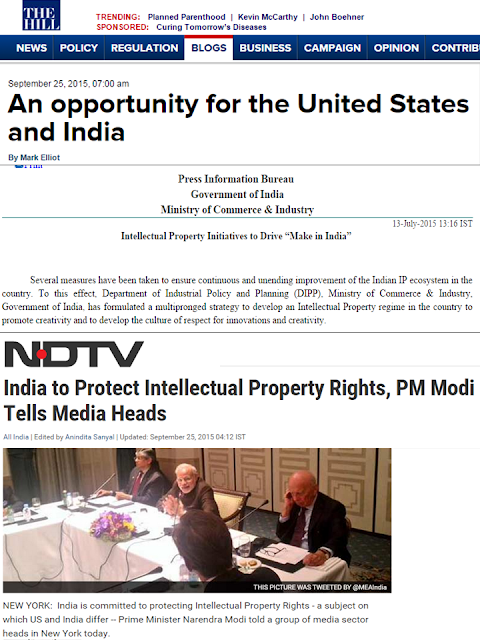 And this news from The Hindu, 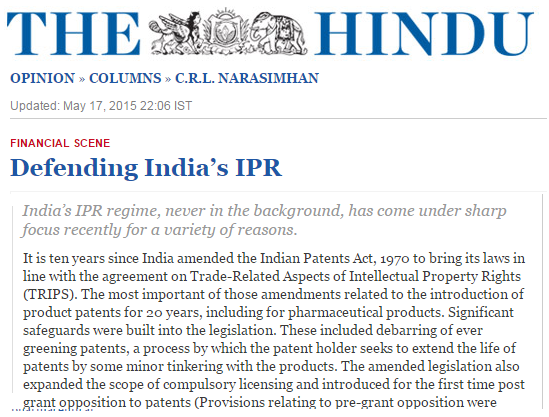 Thanks to those pieces of good news. It is not possible to have more revolutionary and costly innovations in many sectors and sub-sectors of an economy if the inventors and innovators cannot internalize the rewards of success and the losses of failures, simply because a horde of copy-catters are just milling around to say later on, "we also invented that" and do good business even if they contributed nothing to the discovery of new molecules, industrial and circuit designs, new songs and books, and so on.

Meanwhile, Pugatch-Consilium released its new report, the Biopharmaceutical Competitiveness and Investment (BCI) Survey 2015. From the few selected countries covered by the report, here is the summary of BCI scores and ranking. India ranked 11th out of the 15 countries surveyed. 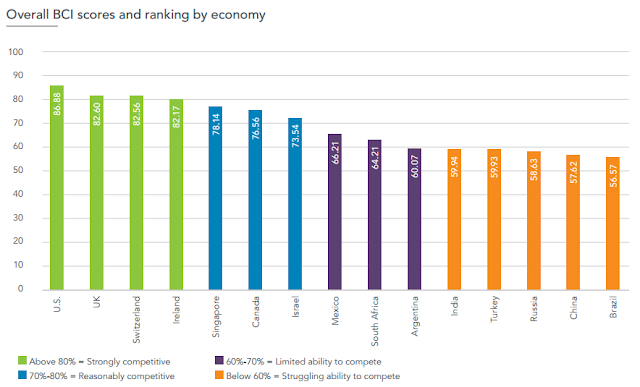 For India in particular, a score below 60 means that it is non-competitive in biopharmaceutical research, clinical trials and investments.

The US Chambers' GIPC also released the supplementary statistical charts and analysis, Unlimited Potential, also prepared by Pugatch-Consilium. Below, the report plotted the data of the GIPC Index Score and the Global Innovation Index 2014.

While Singapore, S. Korea and Japan scored high, India and Indonesia scored low, though not as low as Nigeria's. 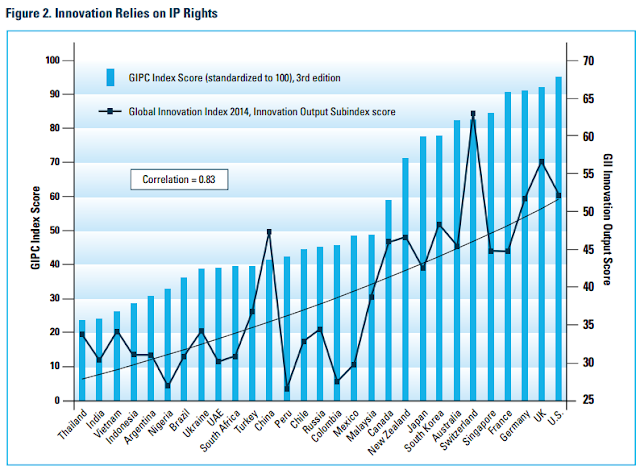 Also a plot of GIPC index score and Online creativity score, and India and Indonesia scored low, though not as low as Nigeria's. 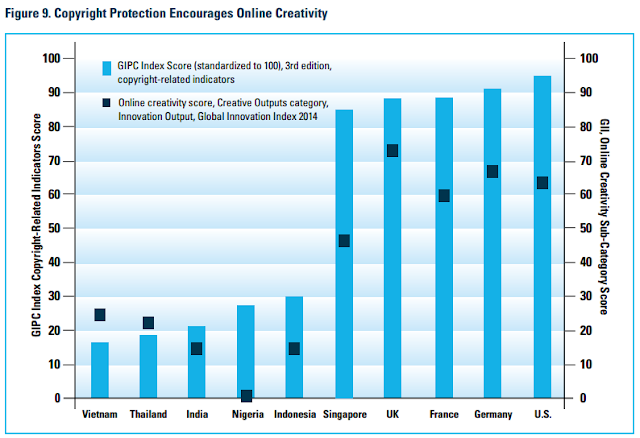 Hence, the recent pronouncements by PM Modi. He needs to counter the low or negative image of India when it comes to respecting and protecting the various products of the mind and intellectual entrepreneurship.

The main role of government in this case is to lay down rules that are fair and transparent to all players, to protect private property whether they are physical or non-physical/intellectual.
-------------