IPR and Innovation 26, Countries with most patent applications, most innovative universities

I was surprised to see this data from the WEF this week, that China has so many patent applications compared to the US, Japan, S. Korea and Germany. Original data is from WIPO. Anyway, Asia's four biggest economies are in the top 10. 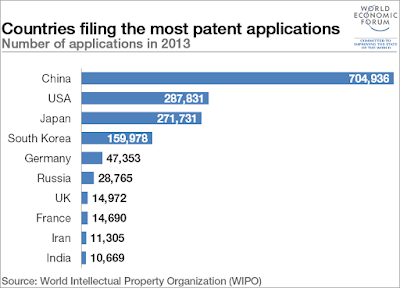 source: WEF, Which countries file the most patent applications? September 14, 2015.

Meanwhile, Reuters conducted its own study on the world's most innovative universities and the result for 2015 was released also this week. The study used 10 different metrics, criteria "focused on academic papers, which indicate basic research performed at a university, and patent filings, which point to an institution's interest in protecting and commercializing its discoveries." 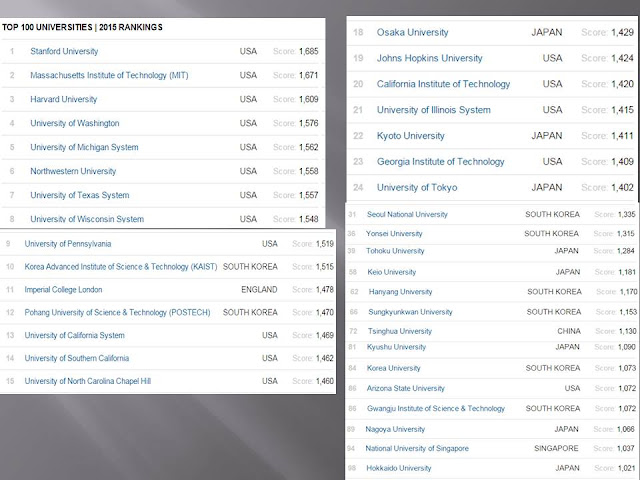 Nineteen (19) Asian universities landed in the top 100 mostly dominated by US universities. The Koreans are rising fast in the technology and innovation ladder, some brands are already top global players like Samsung.

I'm curious if many of these top Asian universities are state-owned and operated, like the NUS. The top US universities though are private.

Now there seems to be a "disconnect" between the two data above. China's universities are not so known in innovation (only one landed in the top 100, at least based on the Reuters study and ranking) yet China is #1 in the world in patent applications. More data and interpretation may provide the explanations.
------------