ALMOST ALL the modern things that we enjoy now, from mobile phones to computers, TVs, refrigerators, cars, buses, trucks, tractors, planes, buildings, airports, etc., come from mining. It is not possible to have modern life, to live more productively, wealthier and healthier, without using the products of mining.

Many people take this for granted. That is why many people hate mining, especially big corporate mining and wish that there will be “No Mining” policy in the whole country soon.

The contribution of mining in the Philippine economy looks small. Just 1% of gross domestic product (GDP) and only 0.6% of total employment. And so the temptation to “Close all mining” calls continue. 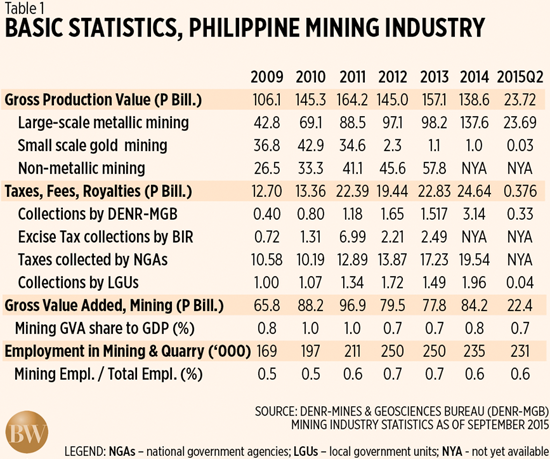 But read the first paragraph again. People only see the stones, rocks, and soil being removed from a particular province, the mud and tailings that flow during heavy rains while ignoring the fact their gadgets, appliances, vehicles, buildings, electrical cables, and wires come from those rocks and soil extracted somewhere else.

Between “No to Mining” and “Allow Mining” is the philosophy of “Over-tax, over-regulate Mining”, and this is what we have now.

First, the Philippines has the highest value added tax (VAT) or gross sales tax rate in the Association of Southeast Asian Nations. And second highest in corporate income tax (CIT) at 32%, next to Myanmar’s 35%; it is almost twice the CIT in Singapore of only 17%.

Second, the number of taxes, royalties, regulatory fees, contributions and mandatory community expenditures that a mining company must pay is rising through time.

Thus, after paying those taxes and fees to government, supposedly to finance public education, public health, public housing, public roads, various livelihood trainings and seminars, a mining firm must spend extra to build its own school and training center, own hospital and clinic, own housing, own roads, drainage and street lighting, conduct livelihood trainings, and so on via social development and management program (hundreds of millions a year), environmental protection and management program, environmental work program, etc.

It is obvious that the over-taxation and over-regulation of mining is driven by envy and political opportunism. Mining and extractive companies are next to evil so governments and the communities that host them should extract as much social and economic rent from them.

There are proposed revisions to current mining tax and the most dominant proposal coming from the Mining Industry Coordinating Council (MICC) is proposing an even higher taxation and government share.

House Bill 5367, the MICC version, proposes that government as “owner” of the minerals should get 10% of a miner’s gross revenues for the year, or 55% of “adjusted net mining revenues (ANMR)” (ANMR: gross revenue less production and other deductible costs but not to exceed 10% of direct mining, milling and processing costs), whichever is higher; and 60% of any windfall profit (in case the “ANMR margin” -- ANMR divided by gross revenue -- exceeds 50%, the government gets 55% of that threshold of 50% of gross revenue plus 60% of the excess).

The consolation is that those high taxes will replace the CIT, royalty to indigenous communities, duties on imported specialized capital mining equipment, mayor’s business permits and other fees and charges imposed by host local government units (LGUs).

It is not good to create public policies, in taxation and mandatory fees and contributions in particular, based on envy. People benefit from mining, directly or indirectly, even if taxes are just 10% or zero. It is the fear of “environmental destruction” that is paramount in the hearts of many people. So long as the company institutes measures and spend huge money to control or minimize such danger, the politics of envy should be curtailed.

Imposing very high taxes and complicated requirements will drive away the legal, large, responsible mining companies that want to remain honest. Or it will force them to become corrupt just to stay in business. “Small-scale” and illegal mining that are hardly taxed and regulated will flourish.

Tax hike proposals should be compensated with streamlining and abolition of other taxes, charges, and over-bearing requirements.

Bienvenido S. Oplas, Jr. is the head of Minimal Government Thinkers, Inc. and a Fellow of the South East Asia Network for Development (SEANET).