A weird news about the DENR last week. It says,


Environment and Natural Resources Secretary Ramon J. P. Paje said yesterday that he wrote a letter to the DoE seeking a halt to approvals for coal-fired projects.


“Our position is that in any country, the power mix must not go beyond 35% or 33% of one power source. If they continue pursuing coal, according to the secretary of DoE herself, she said it can go up to 70%.”

This means that the Philippines has no right to cheaper and more stable electricity sources? We have the second highest electricity prices in Asia already, next to Japan, and coal power is cheap compared to oil and the renewables, so why should that power source be restricted?

It is a wrong move or policy by the DENR. It is not possible for the Philippines to grow faster if its electricity prices remain expensive and there is regular power disruptions and brown outs, especially in Mindanao.

Here are some recent reports about power development in Mindanao and the Visayas. 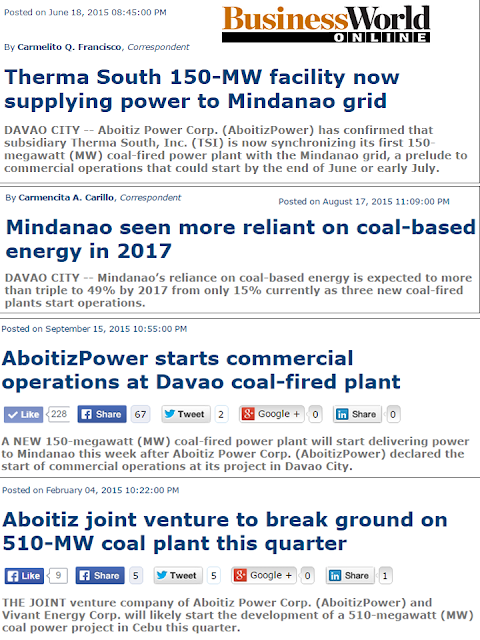 “The share of fossil fuels in the energy mix is rising from a mix of 45% fossil and 55% renewable energy (RE) in 2015 to 67% fossil and only 33% renewable energy-sourced power by 2017,” said Romeo M. Montenegro, director of investment promotions and public affairs of the Mindanao Development Authority (MinDA). The other fossil sources are diesel-powered generation plants.

And from the February 04 report,


The entire plant is slated for commercial operations in 2018.
The project site for the project was acquired in December 2011 and an environmental compliance certificate for the plant was secured in May 2013.

Therma Visayas, the project proponent, is majority owned by AboitizPower with its 80% interest.
Vivant Energy, a subsidiary of listed Vivant Corp., on the other hand, holds the remaining 20%.

Government, through the DENR, DOE, local government units (LGUs) and other agencies, should step back from imposing more regulations as to what power plants should be curtailed and be subsidized. If the government is serious in having fast and sustainable growth, cheaper and stable electricity is among the most important prerequisites. Energy development precedes economic growth.
-------------