Reposting (with permission) some comments and questions by a friend, JB Baylon, posted in his fb wall. Then my additional comments below. The photos I got from the web, added here and not part of JB's original posting.
-----------


September 13.
There is something wrong with headlines of news items about the LP.
This one says Sec Mar's mom stopped a party leader from quitting. Another one says PNoy has chosen Leni Roberedo to be the running mate.

Excuse me. It is Sec Mar who is the candidate now. It should be he who is making these decisions - or at the very least delegating to others the making of these decisions. He needs to be seen as his own man now - and these headlines are not helping. Either the stories are not accurate - or something has to change in the way the LP makes its decisions.

We want to know that we will be voting for Mar Roxas the man qualified to be President -- not for PNoy the soon former President, or Judy Roxas the mother of the candidate for President for goodness' sake! 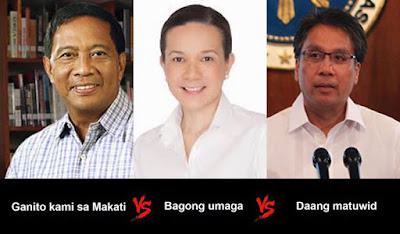 September 19.
ISSUES I THINK THE THREE CANDIDATES HAVE TO ANSWER: (SHARE IF YOU AGREE!)

As a political science student, and looking at our three declared candidates, these are what i would like to ask them in a public forum:

To Vice President Binay: how do you respond to all the allegations of corruption beyond claiming they're politically motivated? Why is your close associate Mr Limlingan still unaccounted for till now? Could he by any chance be on the space shuttle to Mars?

To Secretary Roxas: why should I vote for you given your dismal record at the DOTC and the unremarkable record at the DILG? You claim that politics never figured in your work, but what about the Yolanda brouhaha with the Tacloban Mayor? And the fact that the President sidelined you on Mamasapano - isn't that a reflection on the amount of trust - or lack of it - that he has in you?

To Senator Grace Poe - the citizenship issue aside, you have the thinnest public service record among the three candidates. We require commercial pilots to have a certain number of flight hours before we entrust them with a commercial aircraft. I will not agree to being operated on by a fresh graduate of Medicine. Explain to me why in your case we the voters are effectively being asked to put our trust in someone who in other professions wouldn't be the lead and yet is aspiring for the Presidency of the Republic!

Now aren't these the questions we should be pressing on our candidates???

And here are my questions to the three declared Presidential candidates.

For VP Jojo Binay: You promise more subsidies, more welfare programs nationwide if elected President and yet you also support cutting income tax rates. How do you plan to sustain the budget for more welfarism without resorting to higher taxes elsewhere plus endless borrowings? Or you are silent about your hidden plan to raise taxes elsewhere and continue endless borrowings?

For Sen. Grace Poe: Lots of questions about your citizenship, you voluntarily gave up your PH citizenship (to become a US citizen) and reacquired it later. Your kids remain US citizens until now. Answer those questions convincingly. And you justified the Iglesia illegal, stupid occupation of Edsa for 3D/3N that created heavy traffic, cancelled flights, meetings for many people. Do you still justify the Iglesia bullying and arrogance?

For Sec. Mar Roxas: DOTC during and after your term (succeeded by another LP leader Sec. Jun Abaya) is lousy, inefficient and corrupt. I don't even have a plastic driver's license, don't have that new car license plate until now, after fully paying for them last May and April, respectively. As a Liberal leader, do you intend to keep the current BIG and bureaucratic government size, or trim it down? 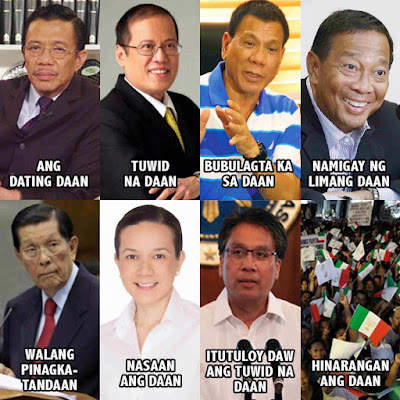 Pahabol kay VP Binay: You are lying when you repeatedly declared in your provincial sorties that "you made Makati rich" in your nearly 30 years leadership (you, your wife, young son Junjun). What, Makati before was poor and you made it rich??? First time I set foot in Makati as a probinsyano from Negros Occidental was in 1980. I saw the high rise buildings, clean streets of Ayala ave. and surrounding areas. Makati was already rich even before you were appointed as OIC Mayor.