Eco-protectionism is wrong. The idea that countries and economies should erect new trade barriers on top of existing ones, tariff or non-tariff, to cut carbon emission is wrong. Trade precedes growth and development, inclusive or otherwise.

Here is an example of eco-protectionism, from a PH planet saviour climate official during the APEC meeting in Iloilo City last week. He said,
“If you (APEC economies) are not prepared to address (disaster risk issues), then there is no trade to speak of,”

"For instance, some countries are considering the imposition of border adjustment taxes on imports produced with greater carbon emissions than similar products produced domestically, and subject to carbon emission limits," said Davies. 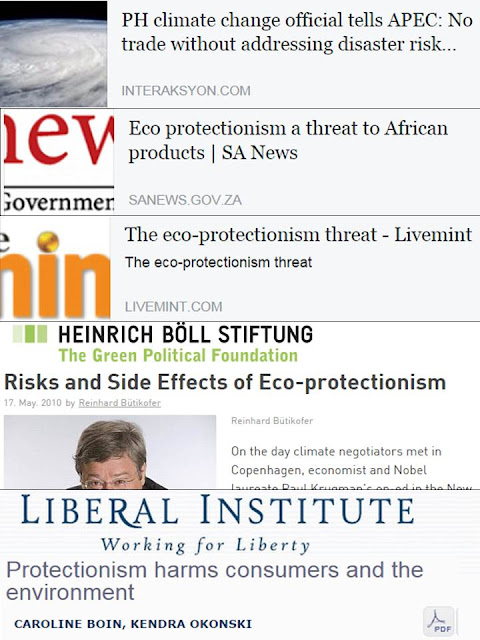 "At the same time, however, another form of protectionism is threatening to assert itself: imposition of trade measures, ostensibly for reducing emissions of harmful greenhouse gases (GHGs). The two dominant economic powers, the US and the European Union (EU), have signalled the introduction of domestic legislation for reducing emissions of carbon dioxide, one of the principal GHGs, by establishing standards for their domestic industries. But, perhaps more importantly, they have also indicated that these standards will be imposed on imported products. A new form of “green protectionism” is, therefore, on the anvil, one that has been aptly described by Prof. Scott Barratt of Columbia University as “eco-imperialism”.

Even someone from the German Green political foundation, HBS, signaled caution against eco-protectionism.

"In earlier pieces, Krugman has answered this in the affirmative and added that climate-based tariffs against carbon leakage, i.e. the shifting of emissions abroad, had to be brought into compliance with WTO rules. I do not want to categorically nay-say this but point out a number of serious political risks:

Firstly, European industry has already been granted a number of exemptions from emissions trading and thus achieved considerable cost advantages. Additional climate tariffs would not be legitimate protection but protectionism.

"Environmental ideologues continue to make dour prognostications about our planet's future, claiming that we all must consume less, have fewer children and trade less with each other to address climate change. Based on their scaremongering and frankly embarrassing record of false predictions in recent decades, these claims should not be heeded seriously. Such demands may suit the protectionist agenda but they have little merit in terms of their practical ability to enable humanity to use scarce natural and human resources in an ever-more sustainable manner.

The competitive market process, underpinned by free trade between and within nations, is inherently more sustainable than the regulated economy advocated by eco-doom mongers. Protectionism, naked or cloaked in green, harms the vast majority of people as well as the environment - and is best avoided.“
--------------