On the refugee crisis in Europe (mainly coming from Syria) and East Asia (mainly coming from Myanmar). One possible solution is for the EU and ASEAN countries to buy one island respectively, and put all the refugees there. That island should become a new country someday with its own government and territory.

Meantime, EU and ASEAN countries, other countries outside the respective unions, theUN and multilateral, foreign aid agencies should chip in and help, plus individuals and civil society assistance, will give foreign and humanitarian aid to those islands of refugees. The aid is short-term, something like five yearsuntil the new settlers have put up their own government and become self reliant.


As of Jan. 2014, some 11.7 M people are refugees or in refugee-like situations, 468,000+ of them are in South East Asia. http://www.unhcr.org/5461e5ec3c.html
UNHCR Global Appeal 2015 Update - Populations of concern to UNHCR
UNHCR.ORG|BY UNITED NATIONS HIGH COMMISSIONER FOR REFUGEES

Any of those governments can sell an island, the rest of the union member governments (EU, ASEAN) can chip in money to pay it, send initial humanitarian aid.

Some islands are big enough to host two million people or more. Consider Singapore, territory is so small, you can travel around it by train within 2 hours, yet it can host 4.5 M people + several millions foreign visitors and foreign workers more.

Comments by friends to the above proposal. The photos are not part of their comments, I just added them, copied them from various sources in  the web.

1. Lai R: I would like to donate the Spratlys Island, Ayungin Shoal and Recto Bank. Also Sabah.

2. Christine FG: Would have been ideal if only the migrants are not so single-minded in trying to reach Germany and Sweden. All other locations are not good enough for them. 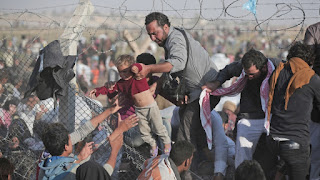 3. Hector B: The solution is to force Syria to take their people back. The policy should be that any nation which degenerates into a failed state by generating more than 300,000 refugees should be given an opportunity to take the refugees back and restoring order under UN supervision. If they refuse or fail to take back the refugees and get their act together. The state shall automatically be considered as a failed state and devolve into a UN trust territory. The goverment shall be dissolved and the state shall be reoganized into a commonwealth under UN governance.

4. Francis B: The only way to handle refugees is to immigrate and integrate them. We should also be free to be picky about who we let in. Remember, these people are not immigrating by choice and so, may not really care about becoming part of the host nation. 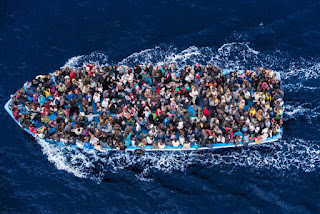 On #3: It may not be the Syrian government that will fry and butcher the refugees if they decide to come back, it might be their fellow ordinary Syrians. Leaving Syria was a great risk. Going back will be an even greater risk.

Many EU governments have already recognized that they need to help. The question only is how much help they can house and accommodate, even  temporarily.

Almost all experiences of secession were successful -- Taiwan from mainland China, Singapore from Malaysia, East Timor from Indonesia, the many "stan" from former USSR, and so on. All refugees have experienced political persecution one way or another, so it is something that they will try to avoid if they have the chance to build their own nation.

On #4. The reason why those hundreds of thousands of Syrians are seeking refuge in other countries is  precisely because the UN, the Syrian and other MidEast governments, ALL of them cannot ensure the lives and safety of those people. They are either helpless or unwilling to protect the lives of those refugees.
-------------