BWorld 18, Non-tariff barriers in the ASEAN

Trade between and among people is beautiful. What one does not need because he has surplus production, he can sell it and get those things he does not have but he needs, via purchase or via the old system of barter.

Countries and economies that trade more are more advanced, more developed compared to countries that are less friendly to more international trade.

That is why free trade has become a known policy and advocacy in many countries for centuries now. Import tariff rates have been declining significantly, down to zero for some economies like Hong Kong and Singapore.

But protectionist interests have invented many types of non-tariff barriers (NTBs) or non-tariff measures and these limit or restrict trade.

Among the less-visible type of NTBs are the various business bureaucracies and regulations. For instance, while it is possible to require only three documents to allow exporters and importers to ship or receive their products, other Association of Southeast Asian Nations (ASEAN) countries require six to 10 documents.

Here is one result of the World Bank’s Doing Business 2015 Report, section on International Trade. There were 189 countries covered in that report. Global ranks of ASEAN countries are given.

It would take around three weeks for an exporter to finally move his containers out of Cambodia, Laos, Myanmar, and Vietnam, too long compared to less than one week in Singapore and around two weeks for exporters in Malaysia and Thailand. 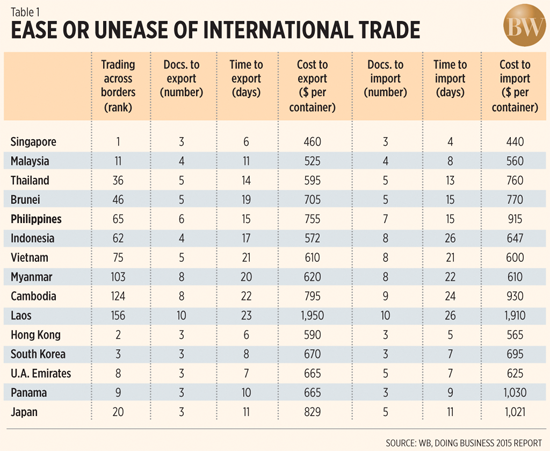 It is really possible to cut the time to export to just 11 days or less, as shown by Singapore and Malaysia plus the seven countries above. The eight other governments in the ASEAN need not hold back the exports of their entrepreneurs for two weeks or more.

A similar measurement of bureaucracies and taxes as new variety of NTBs is covered by Fraser Institute’s Economic Freedom of the World (EFW) annual reports. The EFW is composed of five areas, including the freedom to trade internationally. This area is composed of four sub-areas: (A) Tariffs, (B) Regulatory trade barriers, (C) Black market exchange rates, and (D) Controls of movement of capital and people.

For this piece, sub-areas A and B are shown. Laos was not included in the EFW report. Hong Kong is added here as “benchmark” for being the freest economy in the world.

The above numbers show that ASEAN countries generally have low tariff rates, with scores of eight to almost 10 (Singapore and Brunei). This is a reflection of the accelerated trade liberalization policy in the region.

But there are problems too, like having wide variations and high standard deviations in tariff rates. Singapore, Malaysia, Thailand, and Vietnam have scores below six.

The member-governments of the ASEAN need to be reminded from time to time that the main purpose of trade liberalization is to empower the consumers and producers of their own countries with more choices. NTBs and complicated bureaucracies defeat or undermine that goal.

Free trade means free individuals, free enterprises. Restrictions to trade is restricting individual and economic freedom, the freedom to choose and compete, where and from whom to buy and to whom to sell.

Some consumers though can lose from free trade and unilateral liberalization if the goods they regularly consume are being exported because prices can go higher. But this loss is temporary because more goods, more choices from abroad will become available in the domestic market.

Multilateral trade negotiations for free trade are too unwieldy and costly, time-consuming and bureaucratic. Regional and bilateral free trade agreements (FTAs) are faster in producing agreements and results but they are selective and become an excuse for protectionism against countries where no FTAs are signed yet.

Unilateral trade liberalization, no need for or minimum of negotiations, just open the borders at zero tariff and minimal bureaucracies, is pro-development. There is little or no justification to restrict trade as it is a voluntary exchange between two or more entities -- individuals, companies, and institutions.

People and companies, not nations and governments, trade with each other. Governments therefore should reduce restrictions on people and goods mobility.

In particular: (a) reduce tariff and non-tariff barriers like quantitative restrictions and customs bureaucracies, and (b) simplify visa requirements and issuance, reduce the cost of migration.

The main function of government in trade is to help enforce contracts and promulgate the rule of law. And the only justifiable considerations for governments to regulate trade are those involving public health and safety. Like bringing in or exporting weapons, ammunitions, dangerous substances, counterfeit or substandard medicines, virus-infected animals, etc.

All other goods should be allowed entry with the minimum or zero restrictions and taxation. This will significantly bring down prices and benefit consumers, especially the poor.

Two groups of people dislike unilateral trade liberalization: (a) the protected local businesses and cronies, political interest groups like militant trade unions and farmer organizations, and (b) trade negotiators and consultants who regularly fly and have endless meetings in some beautiful and expensive hotels and cities abroad.

Smuggling can be beneficial to consumers through lower prices compared to protectionist prices. But this expands corruption in government. To remove the opportunities for corruption and rent-seeking and at the same time give consumers and local producers the freedom to get cheaper goods and services, protectionism should be abandoned and unilateral liberalization should be pursued.

Other institutional constraints like protectionist constitutions that explicitly protect domestic business interests and limit foreign competition should be amended to allow or encourage more foreign investments and trade.