There are rush efforts this month to finally push a Trans Pacific Partnership (TPP) Agreement. Here are some few news reports, September 16-18, 2015.

From the Globe and Mail:

An effort to land a massive Pacific Rim free trade agreement within weeks is under way, raising the prospect the wide-ranging Trans-Pacific Partnership could dominate the final stretch of the Canadian election campaign.

The costs of entry to the Trans-Pacific Partnership could include exposing the Canadian auto parts sector, which employs 80,000 people, to far more foreign competition and eroding the preferential position the industry enjoys under the North American Free-Trade Agreement (NAFTA). It could also cause headaches for dairy farmers by opening their sheltered industry to significantly more imports.

Two to three days of talks will be held in the U.S. city of Atlanta. Free trade rules for most of the 31 areas covered by the TPP were settled at the last round of talks in July. But intense disagreement remains on dairy products, automobiles, intellectual property for pharmaceuticals, and other areas where national interests are at stake. Chief negotiators will meet ahead of the ministerial talks, seeking to lay the groundwork for consensus.


Sept. 17 (BNA) -- The next round of Trans-Pacific Partnership (TPP) talks will take place in Atlanta from Sept. 23–Oct. 4, with the trade ministers from the 12 Pacific Rim countries meeting Sept. 30–Oct. 1, several non-U.S. TPP sources told Bloomberg BNA.
The sources said an announcement on the conclusion, in principle, of the agreement is expected Oct. 1, adding that the chief negotiators are scheduled to stay until Oct. 4 to clear up any loose ends. 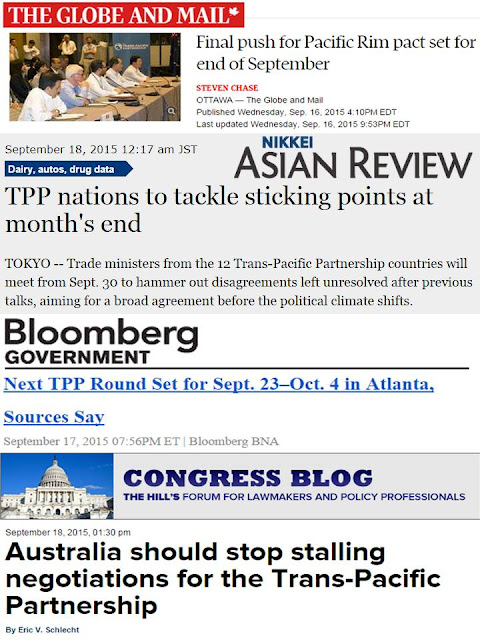 The best trade policy for any country of course is unilateral trade liberalization, both in tariff and non-tariff measures. Keep trade negotiations to the minimum, involving only products and services that can affect public health and safety, security. The rest of products and services, allow free trade, imports and exports.

The second best trade policy is global, multilateral trade liberalization under the WTO. But both unilateral and global liberalization are far out at the moment.

So the third best trade policy is regional liberalization, like the ASEAN free trade area (AFTA), NAFTA, EC, and so on. TPP is along this line. So a successful TPP Agreement will, overall, be a good and positive thing for the 12 member-countries. I wish that the TPPA will become a reality within the year.

Meanwhile, there was a good presentation made by Dr. Ramon Clarete during the UPSE-Ayala Economic Forum in Manila last October 23, 2014, Going Regional: Which Mega Trade Deals Should the Philippines Join?
http://www.econ.upd.edu.ph/wp-content/uploads/2014/10/ACUPSE-III-2014-WEB-v03.jpg

I am reposting some of his points below:

Preferential Trade Agreements (PTAs): ‘Termites’ of the WTO trading system
- Bhagwati calls PTAs so.
- However the WTO under its GATT 1994 allows PTAs.
- But the ‘termites’ increased in number: 70 before 1990s, 300 in 2010, and 432 in 2013… and growing.
- Most PTAs are bilaterals, free trade areas, and trade and investment agreements.
- But then came the mega trade deals in the last decade.

Political economy of mega trade deals
- Changing views of US away from multilateralism, case of NAFTA
- Checking China’s rise and the pivot to Asia policy of the Obama administration
- Developed countries demand regulatory convergence, to calibrate trade rules that facilitate more investments and trade in regional or global value chains
- WTO turning out into a forum that the developed countries find too difficult to set the trade rules they want

Two sides of mega trade deals
- Corrects the ‘spaghetti bowl’ effect of PTAs
- Has the potential of undermining WTO’s role as a forum for negotiating and enforcing trade rules and expanding market access in the world
- Risks having trade rules by trading blocs, Back to ‘great powers’ world of the 19th century. 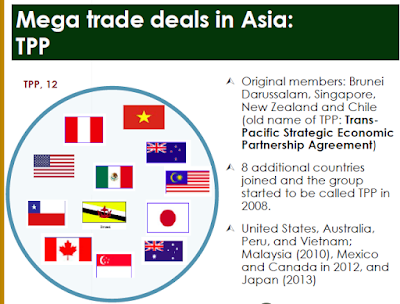 TPP: gold standard for PTAs?
- Since the 1990s, about 300 preferential trade agreements (PTAs) entered into force, were signed but yet to be implemented, or are being negotiated.
- TPP is a gold standard of PTAs
- WTO + PTA (deeper trade liberalization)
- WTO – PTA (goes beyond the WTO)