The country’s media outlets were bombarded this week by “water crisis”, “water woes to get worse” and related stories. Some friends asked me if the current water deficit in Metro Manila is due to global warming and man-made climate change.

My quick answer is NO. There is no global heat wave, there is no extension of the most recent El Nino, and there is no postponement to the forthcoming La Niña.

And the “inconvenient truth” for people and groups who want to hear “more global warming” stories, is that Pacific Ocean.is now is now “in early stage of a La Nina event, and that 2010 will be considered a La Niña year.”

Below is an update, as of July 19, 2010, of the Southern Oscillation Index (SOI) in the Pacific Ocean. An SOI of -8 or lower means El Niño while an SOI of +8 or more means La Niña. 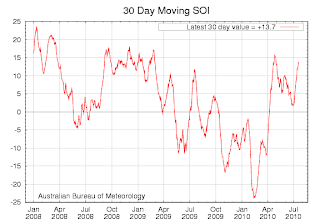 If we also look at the global temperature of the lower troposphere (about 8 kilometers above the surface), is there truth to “worsening man-made warming” and hence, “more frequent water crisis” claims?

Here is a graph of global temperature anomaly of the lower troposphere, satellite data from the University of Alabama in Huntsville (UAH), 1998-2010. Red fluctuating line is monthly temperature data, green straight line is the linear trend. 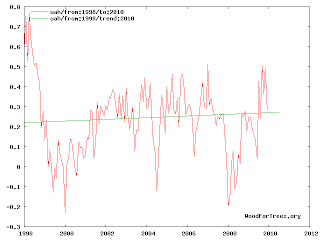 There was no significant warming in the planet after the big El Nino in 1998. The global cooling in 1999 to 2001 was repeated in 2008 cooling. And with the current trend in decline in global tropospheric temperature and sea surface temperature, another round of global cooling – and severe rains in the tropics and severe winter in the northern and southern hemispheres – is expected starting this month up to the next few years.

So, should the President declare a “water crisis calamity” in Metro Manila and the neighboring provinces? Aren’t the long lines of people in certain areas of the metropolis enough proof of how serious the crisis is?

No, there is no crisis. Per projections by the water companies in the metropolis, if there will no sufficient rain to fall until September this year, it will become a full-blown crisis.

Meanwhile, how to solve the water deficit in some areas of the metropolis? Perhaps the quicker solution is for some sharing of water by Manila water and Maynilad water for now. Then wait for the rains in the coming weeks and months as the two graphs shown above clearly indicate of falling temperatures both in the atmosphere and the ocean.

There is no global warming. The water "crisis" in the metropolis is more of an engineering problem, not a climate problem. For instance, there seems to be a lack of dams to catch excess rain water during the rainy season in the country.

When I go to the US, my plane passes by Japan. I observe from my window that in the mountains of Japan, a single river would have up to seven dams to temporarily impound the water. So that for one river system, there are five to seven water catchment areas with a huge total volume of water supply.

Here in the Philippines, there seems to be only one or two dam/s to catch and impound water from rivers. One long-term solution, therefore, is to build more smaller dams upstream, to have more water catchments in the mountains. This will (a) reduce flash flooding during the rainy season, and (b) impound water for multiple uses during the dry or summer season, like irrigating upland farms.

There were also reports that there was an excess release of water from the dams last December 2009, equivalent to almost three months of water consumption in Metro Manila.

Such mistake should not be repeated again.

Current water supply deficit in Metro Manila and nearby provinces is part of the water supply deficit - excess – deficit – excess natural cycles. What the public should worry is the excess in climate alarmism that find their way in more environmental regulations, more carbon taxation, more climate bureaucracies being created, and endless global climate meetings that are funded from taxpayers’ money.
Posted by Bienvenido Oplas Jr at 4:50 PM