UP Forum with Tom Palmer, July 15

Tom Palmer's first speaking engagement in Manila, also his first time to visit the country, would be at the University of the Philippines (UP), jointly sponsored by the Third World Studies Center (TWSC) and Political Science Department, July 15, 2010 4pm.

I gave a short message before Tom's lecture. I said that I learned Marxism and hatred of the market in the early 80s at the TWSC and as a Pol. Sci student in UP, from Profs. Alex Magno and Temy Rivera, two of the reactors that afternoon (audience laughter). But I abandoned the philosophy several years ago, I have embraced free market, more individual freedom philosophy. But since I am not really a good speaker, and upon learning that Tom will be going to Manila, I suggested to some friends at TWSC and Pol Sci department, if they are willing to organize a talk for Tom. And that's why we were gathered that afternoon.

Here is one of his slides where he explained the beauty of free trade and the concept of comparative advantage. 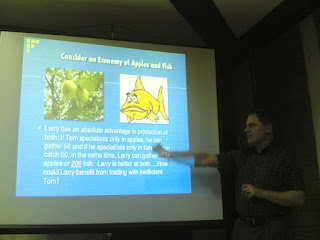 Could be 50 students and staff attended the lecture including those who came late. Mostly political science students, graduate and undergrad. 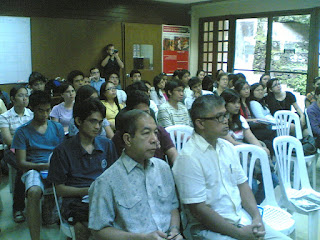