A friend asked me if there is anyone in the new administration of President Aquino who can include some of MG advocacies, while the situation is still "fluid".

I said that if politicians in the Liberal Party -- the ruling political party now -- really understand and appreciate the liberal philosophy, as in classic liberal, not US "liberal" or Pinoy liberal or the left's favorite sloganeering, "neo-liberal", then there is no need to "put" someone in the administration to remind the President to stick to the party's principles and ideology. 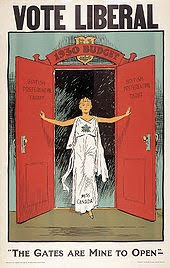 Now the President seems to be more liberal than most LP politicians and party-leaders. It's good. I don't remember the party advocating to drastically slash and reduce the endless business regulations that kill entrepreneurship for some, that discourage free market capitalism in the country. But the President explicitly and loudy advocated for it. That is why I wrote "The President's SONA 2010" about bureaucracies in business.

But more than "influencing" the administration, the bigger challenge for free marketers and believers of classic liberal philosophy, is influencing the public, in slugging out in public debates, the many socialists, millions of them in this country.

Who are these socialists, by the way? Most would not admit that they are socialist and communist, but their advocacies are 99 percent similar to the explicit socialists.

My longer argument about this is posted below, "More statist than the state".

Only the government can create or promote an even-playing field for all citizens (including legal entities). It is not just my belief, but it is THE government's obligation to do so.

However, this obligation should not be misconstrued as 'enforcement of equality', which has tinge of socialism in it. Rather, I would expect that government ensures that everyone has an equal opportunity to do good in life, to pursue his happiness, etc.

Truth be told, the private sector, left to its devices, cannot create this equality of opportunity.

Lardy is right. There is one important function of government that I believe, and I would say that there should be BIG government in implementing it: to protect the citizens right to life, right to private property, and right to liberty and self expression.

And for me, this is the single biggest function of government to ensure the equality of opportunity for all people.

Juan is a hard-working and ambitious person, even if he did not reach college. He is a mechanic by day time, and sells balut/chicharon/ peanuts in the evening, comes home late at night. It won't be long and Juan will become a start up formal entrepreneur, on his way to wealth and being rich. Government's job is to protect Juan and his family from street muggers, thieves, snatchers, "akyat-bahay" gangs, and protect his wife and daughter/s from rapists. Juan has great peace of mind, he works hard, his savings and investment is respected and protected by the state.

Pedro who is less hard-working but very articulate speaker and writer on "rights of citizens", also works to convince the state to confiscate more and more income and savings of Juan so that the state will have plenty of money to "fight poverty", along with the MDG soldiers of the UN.

If the state will stick to its primary function of protecting the citizens' right to life and right to private property, the state should not become an instrument for income confiscation and wealth redistribution.

How about taking care of the really poor, those who became poor because of natural circumstances -- their community was wiped out by a strong flash flood or volcanic eruption or earthquake or tsunami. Or impoverished by a bitter and prolonged clan war or civil war.

Personally, I haven't heard of any very rich man/woman in this country or in the world, who is not involved in any charity organization or foundation. One reason is that there is deep happiness that those people feel and derive when they give away a part of their wealth voluntarily, without coercion by anybody. Another reason is that very rich people would be approached by their friends, acquaintances, former or current staff, to be involved in some charitable causes.

There is one "politically incorrect" outcome of free market capitalism though: high inequality among people. But such inequality and its growing gap is a prduct of endless potentials, endless ambition and high work efficiency, of some people. The super-efficient will soon become very very rich, and this widens their gap with the middle class and the poor.

Then there are certain groups of people who really have no ambition in life except to party and be happy everyday. They may work hard but they also party hard everyday, with little or negative savings. When emergencies emerge, they have no savings, so they borrow. Such initial indebtedness will soon become monster debt if they will not mend their ways.
------

A very wonderful insight, Sir! Most people claim they have a right to education because this right is guaranteed not only by the Constitution but also by the Universal Declaration of Human Rights. This is the hardest part of the battle of free-market capitalism: Education. The non-reality based beliefs and concepts of the advocates of rights continue to blight young people's perception and concept of reality. This intellectual climate is, I think, the hardest thing to fight.

In Phil. politics, there is absolutely no difference whether one is a liberal, a social democrat, a Nationalists, etc.. Politicians are like butterflies which hover from party flower to party flower as the wind blows. Where did we get the term "balimbing"? When Noy became President, GMA's Lakas men simply shifted loyalty, without ever appreciating what it is to be a liberal. tsk tsk tsk...