This news report caught my attention: a known Filipino environmental lawyer and activist has asked the Supreme Court to issue a "special order to compel local government units to construct anti-flooding facilities before the rainy season." See the news report here,
http://newsinfo.inquirer.net/topstories/topstories/view/20100705-279302/Climate-change-petition-prem

The SC to "compel" LGUs to construct anti-flooding activities? This is too statist and dictatorial. And to think that the warmer-leaders are preparing for "unequivocal" global warming, of melting polar ice and rising ocean and temperature rise of up to 6 deg C just 90 yrs from now. Severe rains and severe winter are symptoms of global cooling, not global warming.

A friend asked, should the SC compel the LGUs instead to buy heaters due to the coming global cooling? That's another statist and dictatorial move. The SC or any other national government body should NOT compel the LGUs or anyone to buy anything.

We need to adapt either in global warming or cooling. But carbon regulation has zero impact on it. The Sun, the ocean, galactic cosmic rays, volcanoes and other natural factors, are the main regulators of the Earth's climate. So why do we need carbon tax and trade? It's a multi-billion dollar robbery scheme. Carbon cap and trade in 2008 alone was worth $128 B, even with zero participation yet by US companies and government. 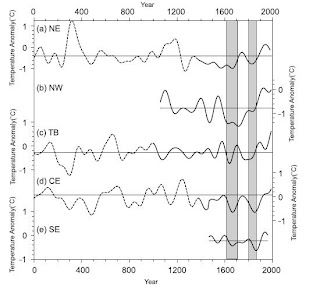 The medieval warm period (MWP) that occured about 800 yrs ago, as well as the little ice age (LIA) that occured some 400 and 200 yrs ago, were confirmed by their data. Almost zero industrial emission some 800 yrs ago and yet global temp was much warmer than the past century's warming. How come? Because CO2 emission is never the main factor for climate cycles of warming-cooling-warming-cooling.
Posted by Bienvenido Oplas Jr at 12:39 AM