In my earlier paper, "Water deficit and alarmism surplus", I argued that the recent "water crisis" was more of an engineering problem and not a climate problem. El nino occurs every 3-5 years, it is not a surprising or unforseeable event, it occurs in cycle. Also, I mentioned that there were reports that the water regulatory agencies released water last December 2009 equivalent to 3 months water consumption of metro manila, leaving little water for the first half of 2010.

I also mentioned in the article my observation of Japan, where one river system will have up to 7 dams to impound and store water. Lots of water to draw upon even during the driest season. Compare that with only 1 or 2 dam/s, if any, for the various river systems in the Philippines.

Someone made a highly impractical of encouraging, or mandating, every household in Metro Manila, to store rainwater in drums. He even computed the total cost:

(yy pesos cost of drum) x (no. of drums per household) x (no. of households in the metropolis) and assumed that the cost should be lower than building another dam.

If you have a big house, then you can put as many drums of water in your backyard or spacious kitchen, etc. But if you live in a 30 sqm (or smaller) condo unit or apartment, each sq.m of space is precious for household needs, not to put drums for water storage.

Also, when you store water in your backyard or kitchen, make sure it is 100% sealed at all times, otherwise you are hosting thousands of new mosquitoes right in your own house. Your house or your neighbor's houses will be a ground zero for dengue/malaria/ other mosquito-borne diseases.

It is really dangerous. If 99 percent of all households that practice water storage through drums will make sure that their drums are 100% sealed at all times, but there is 1% or 0.5% of households who are irresponsible enough to leave their drums unsealed even for just 5 minutes/day, those households will be the biggest ally of mosquitoes in spreading dengue, etc. 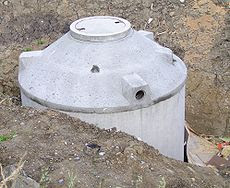 A cistern. Picture taken from wikipedia.

Rainwater harvesting at the community level, say several huge tanks to collect rainwater to serve a village is fine. There should be some professionals who will do that work and apply appropriate technologies to kill mosquitoes inside those tanks. They key is involvement or supervision by some professionals, and not just anybody should store water in drums. 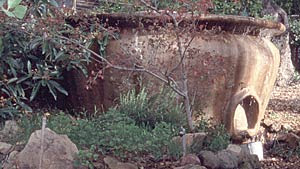 I speak with experience. One of our neighbors before, an old man, store water in 4 drums in front of his house, "sakali may sunog, di na tayo maghintay pa ng bombero." Sounds logical, but not too logical. We were wondering why the mosquitoes would never go away. When that old man left the apartment, we threw the water in his drums, and saw thousands of kiti-kiti, those tiny little submarines that will graduate to become mosquitoes in a matter of days.

Metro manila's population is growing by about 200-300,000 people/year. Plus 1 to 2 million who live in nearby provinces of Bulacan, Cavite, Laguna, Rizal, Tarlac, Batangas, etc. who go to the metropolis daily or occasionally to work, study, do business, etc. The water companies can project the increase in demand and build the appropriate dams for long-term water storage, long-term solution.

Besides, if we stop believing the man-made warming religion and read on our own other scientific blogs and websites, we will realize that the appropriate term is climate cycle, natural climate cycle. Not climate change, much less man-made climate change. Global warming-cooling- warming-cooling. Medieval warm period (warming), little ice age (cooling), past century's warming (peaked in 1998), cooling this decade and the next few decades.