The other side of the “heavily-indebted” countries in the world, somehow, are the “high foreign exchange (forex) reserves” courtries. Although many countries with high forex reserves also have high foreign debt, especially their private corporations and financial institutions. Below are some recent data.

World's biggest forex reserves* in $ billion, May 2010 (unless specified):

* excluding gold, except Singapore and China.

Note that out of the top 10 countries above, 8 are from Asia (including Saudi Arabia), especially the Confucian Asia-5: China, Taiwan, S. Korea, Hong Kong and Singapore.

According to Standard Chartered Bank, the combined forex reserves of ASEAN’s 5 biggest economies (Indonesia, Thailand, Malaysia, Singapore, Philippines) were $452 B by end-2008, $518 B by end-2009, and $545 B by end-May 2010. These are significant amount of money that can help stabilize an economy in cases of uncertainties in global finance.

Governments, like individuals and households, should learn to save and live within their means. If the projected revenues (taxes, privatization proceeds, income from some state enterprises) are low, then expenditures like various government subsidies should be kept low too.

Among the teachings of the great Chinese philosopher, Confucius, savings and frugality is a virtue. And living beyond one's means is wrong.

This is something that the governments of G7 countries and many other countries, need to keep in their minds. Responsible and frugal government will be a good inspiration for the citizens.
-------

Note: this is The Economist's graph: 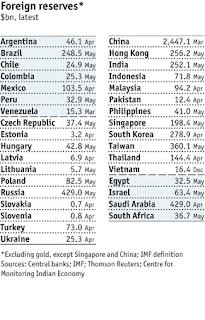 Posted by Bienvenido Oplas Jr at 1:26 AM