"Water crisis" was never a crisis

A friend posted in one of my discussion yahoogroups,

That's a whole decade of hotness in there."

I commented that NASA's GISS (Goddard Institute for Space Studies), the department under NASA that generates this kind of study, along with the IPCC, the World Meteorological Organization (WMO), Al Gore, other groups (Greenpeace, WWF, etc.) would love to (a) use 1880 or 1850 as starting period, (b) use surface station temperature data.

They do not or hardly use: (i) past 1,000 or past 10,000 years temperature record, (ii) sea surface temperature (SST) and tropospheric temperature data.

Because using the past 2,000 years temp. data would show that:

(a) there was period in the past, the medieval warm period (MWP) especially, which was much warmer than the past century's warming.
(b) there was a "little ice age" (LIA) that occured in the past 400 yrs (maundeer minimum) and the past 200 yrs (dalton minimum) where global temperatures plunged.
(c) using 1850 as starting year of temp. comparison is taking the period were the world was emerging from global cooling, the LIA, and starting a new round of global warming.
(d) it's a global warming-cooling-warming-cooling natural cycle, none of it was man-made, never.

The El nino-La nina-El nino-La nina cycles is getting faster too. 2007-08 was la nina period, 2009 was el nino, and 2010-11 will be la nina years. Australia's bureau of meteorology (BOM) has officially declared that this month already saw an early stage of la nina in the pacific ocean, check here,
http://www.bom.gov.au/climate/enso/

Today, I read from the Inquirer, 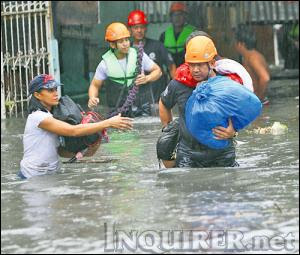 Meaning if those 2 hours of rains yesterday extended for another 4 hours to equal typhoon Ondoy's 6 hours of rains last September, that should have been equivalent to 3/4 of the rainwater dumped by Ondoy.
and there was no typhoon yesterday, only an ITCZ.

Notice how quick some media outlets suddenly become silent of their daily "water crisis" headlines.
All they need is 2 hours of rains to shut them up with their "crisis" alarmism.

Meanwhile, I posted a 20-pages compilation of articles on climate alarmism last month here,
http://www.minimalgovernment.net/media/mg_20100630.pdf
Posted by Bienvenido Oplas Jr at 10:21 AM