They're all socialists in India 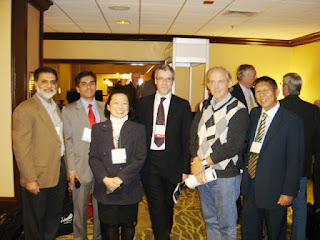 A good friend from Delhi, Barun Mitra (leftmost in this picture, taken last May 2010 in Chicago during the Heartland 4th ICCC) founder and Director of a free market think tank in Delhi, Liberty Institute (www.indefenceofliberty.org), wrote a new article in the WSJ, "We're All (Still) Socialists in India."

Barun writes well, and this article speaks of that talent. Barun says that:

"all Indian politicians are—officially—socialists. That's not a typo. During the height of Indira Gandhi's Emergency Rule in 1976, policy makers passed the 42nd Amendment to the Constitution, which added the words "socialist" and "secular" to the preamble. Then in 1989, the Representation of People Act, the law which governs elections and political parties, was amended to make it mandatory for all political parties seeking registration with the Election Commission to affirm not only the general constitution but also socialism. Since then all political parties have sworn to socialism without any hesitation, without bothering to define what it means."

We're All (Still) Socialists in India
An attempt to strip the word from the constitution is far more important than semantics.

I commented to him through our email discussion list, that perhaps the long-term action needed is an amendment to the Indian Constitution that will remove the word "socialist" and related connotations. But that itself will be a big political battle.

It's like the Philippine Constitution, revised in 1987. So many professions -- physicians, nurses, dentists, accountants, lawyers, advertising, engineering, architecture, etc. -- are reserved only for Filipinos. But the Philippines has thousands of physicians, nurses, accountants, managers, engineers, moving abroad to practice their profession. And there is no Constitutional or legal ban in the many countries that they are working now. Clear double standard and hypocrisy in that provision of the Philippine constitution.

While free market-oriented guys and institutes like Barun do their work, it is time and development in other parts of the world, especially in East Asia (China, Japan, HK, etc.) that will be their greatest ally. There should be growing realization that liberalizing the economy and politics is the long-term solution to poverty and underdevelopment.

Back to the Philippines, there is high optimism in the country now with the election and pronunciation of the new Liberral President. He promise to significantly reduce the number of procedures, the number of requirements and pages, for business registration. Some huge ticket infrastructure projects (naval development, another expressway) are being pronposed with 100 percent private funding, via the built-operate-transfer (BOT) and related schemes.

If there will be significant entry of foreign investors into the PHilippines again, the rest of Asia like India, will notice that. And they will be encouraged to follow suit. Legal and constitutional restrictions like reference to socialism will be slowly checked and reviewed.

There are lots of US, European and Japanese investors that are on the look-out where they can jump ship, as the volume of taxes and new regulations in those countries keep rising, not declining. Asia should be the top destination.

Another friend from Beijing added that in China, they write "under the leadership of the CCP Party", in compliance with four principles "Socialism, Party Leadership, Marxism and dictatorship of the proletariat" provided by the Constitution of China.

So note there: the two biggest countries in the world with a combined population of about 2.5 billion people, are explicitly "socialist" based on their constitutions. It is important, therefore, that such coercion in the constitution will not be strictly followed as it is entrepreneurship and capitalism that provides the economic dynamism that allows the two countries to grow economically and provide jobs to their more than a billion workers, managers and entrepreneurs.
Posted by Bienvenido Oplas Jr at 10:28 PM