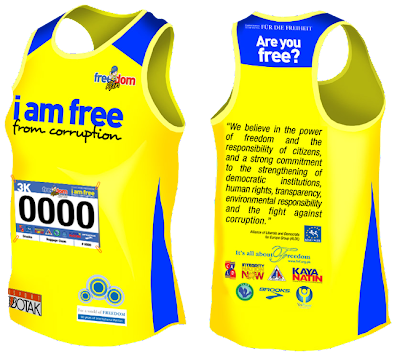 Tomorrow, I will join the Freedom Run 2013 to be held in Quezon City. Like the Freedom Run 2012, I will run the 10K, even if did not join any other run this year. So my legs, be ready to be hammered tomorrow. That means terrible pain in the legs 2-3 days after November 10 :-)

At the Freedom Run facebook page, there was one discussion last Sunday, November 02, if this "freedom from corruption" run is pro-abolition of pork barrel, or simply keep but reform pork barrel. I joined that thread.


I said that the organizer of the Freedom Run is the Friedrich Naumann Foundation for Freedom (FNF) Manila office. That FNF is one of the German political foundation with an office in the country, along with Konrad Adenauer Foundation (KAF), Friedrich Ebert Foundation (FEF) Hans Seidel Foundation (HSF), etc.

FNF I think does not take any position on the pork barrel debate, whether to reform it or abolish it. And I don't think any foreign political foundation should take that position. It is funded by German taxpayers, not Filipino taxpayers, and the goal of each political foundations is to propagate their respective  philosophy at the general level, not taking into specific details of policy debates in the country where they have an office.

So if people feel so strongly about a particular stand, that pork barrel should be scrapped, or be reformed, then they might be disappointed that FNF will not take a specific position. If your participation in the Freedom Run is pre-conditioned on such scrap or reform pork, black or white position, then they might be disappointed as FNF has no stand. 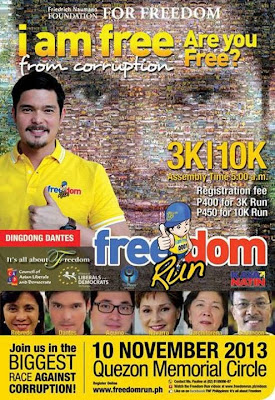 I suggested that they join the run and get a running shirt which says at the back, "We believe in the power of freedom and the responsibility of citizens, and a strong commitment to the strengthening of democratic institutions, human rights, transparency,…”

The shirt in Freedom Run 2011 has this message, “We support the liberal values of freedom and individual responsibility, democracy and the rule of law, respect for human rights and tolerance."

So the Freedom Run is under one of its philosophies -- to promote more individual freedom, apart from collective or national freedom.

So join the Run and set aside the debate on abolish or reform the pork barrel as it won't be tackled there. It is not a symposium or seminar, it is a run but there are a few speakers and performers after the run who will discuss what "freedom" means to them. We may agree or disagree with their own definitions of what freedom is, but overall, the event is to celebrate, or advance and insist, that we people should advance our individual freedom. We may have been too engrossed with the politicians, whether they are pro-abolish or pro-reform the pork. Some of us may define freedom as less politics, less government, less interventionism, like I do.

I join the annual Freedom Run because as one of the local friends of the FNF, my personal philosophy of less government, more free market, is consistent with the FNF philosophy more than KAF, FEF, etc.

The first sentence is correct because FDP, the party affiliation of FNF, is sort of the "liberal party" of Germany, its philosophy is liberalism. So LP Philippines and Free (liberal) Democratic Party Germany are ideological allies. Beyond that, similarities may end. Thus, the second sentence is wrong. FNF takes no side on whether to abolish or keep/reform the pork barrel. FNF works not only with pol parties and politicians, it also works with civil society and non-politicians, like us in Minimal Government Thinkers, Inc.

I know the FNF Manila people, they are very professional, they know their mandate and their limit. They are accountable to the FDP and German taxpayers, not to the LP or UNA or any other Filipino pol parties and politicians, or the Filipino taxpayers. They are here to help advance the ideas of liberalism and individual freedom, rule of law, tolerance of social diversity and respect of human rights. So they are selling an idea, not politicians or a political party.

Freedom Run. It is the only run in this country with clear political message printed on the running shirt itself like “individual/citizen freedom and responsibility”, “human rights and rule of law.” Beyond the nation, beyond the collective, there is need to remind ourselves the value and primacy of the individual.
------------