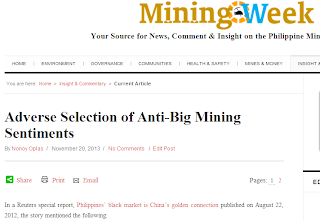 In a Reuters special report, Philippines' black market is China's golden connection published on August 22, 2012, the story mentioned the following:

* Up to 90 percent of small-scale Philippine gold production is being smuggled out, much of it to China.
Potential revenue loss is big.

* The Philippines, the world's 18th largest gold miner, produced just over 1 million troy ounces of gold in 2011, worth $1.6 billion at current prices. About 56 percent of that came from small-scale miners.

* Arthur Uy, Governor of Compostela Valley, the top small-scale gold mining province in the Philippines, said the black market in gold is mainly based in the capital, Manila. "Most of the gold is being smuggled out to Hong Kong, that's the biggest market," said Uy, a two-term governor.

* The amount of gold sold by small-scale miners and traders to the Philippine central bank in the second quarter plunged 98 percent from a year earlier. By law, all gold produced by miners in the Philippines should be sold to the central bank at around world market prices. Small-scale gold mining output, is the main source of the central bank's gold reserves, which hit a record high of $10.4 billion early this year.

* Traders and officials say the biggest factor behind the spike in the gold smuggling trend the past year is a 2 percent excise tax and a 5 percent withholding tax approved in 2008 but which the Bureau of Internal Revenue (BIR) only started enforcing last year. The tax is imposed on gold sales to the central bank, so is usually borne by the traders.

* Tagum city, the provincial capital of Davao del Norte, is the biggest gold-buying centre nearest to Mount Diwata. Gold traders in Tagum say if not for the tax, they would rather sell to the central bank than in the black market where prices fluctuate fast.
----------

This development is what the public, the militant anti-mining environmentalists included, ironically get. A case of “adverse selection” problem in Economics. The things that they do not want to hear and see are what they get. When  large-scale and corporate mining is demonized, these firms that cannot avoid paying various taxes, fees and royalties because they are large enough to hide behind the mob, the firms that must comply with Mines and Geosciences Bureau (MGB-DENR) requirements and LGU regulations on giving various CSR projects to communities, then less corporate mining will happen.

Many local politicians and businessmen who own the mines can afford to be less caring of the mountain and the personnel.

One way to bridge the huge gap between large-scale corporate mining and small-scale guerilla type mining, is to encourage the latter to pool resources and become more transparent, more accountable, for their activities. It can be in the form of mining cooperatives, or a hybrid of corporate mining with lots of small holder investors.

When a business enterprise becomes big, like the multinationals or local firms which have joint venture and corporate partnership with multinationals, they are forced to become more transparent. They have websites, their corporate officers are there, they report to the SEC, BIR, MGB, LGUs. Often they are also listed in the stock market and hence, they report publicly to their shareholders and potential share buyers. Then there is the Extractive Industries Transparency Initiative (EITI) that both public and private agencies must divulge and submit information.

With such multiple system of reporting to government agencies, private investors and third party information reporting system, a large scale mining firm cannot afford to be too secretive of its mineral output, its tax payment and CSR projects.

Where there is more transparency, more accountability follows. And less environmental destruction, less disregard for health and labor regulations can be expected.