* This is my article yesterday at the EFN website. Karthik Chandra of the Foundation for Democratic Reforms and Lok Satta (People Power), India, helped in filling up some gaps in my original article. Thanks Karthik.
--------------


Day 2 of the Economic Freedom Network (EFN) Asia 2013 Conference started with a presentation by Fred McMahon of Fraser Institute in Canada, of the results of the Economic Freedom of the World (EFW) 2013 Report. Before presenting the numbers, he reiterated the definition of “economic freedom” as fundamental rights. Without these basic rights, no political or civil freedom can prosper. 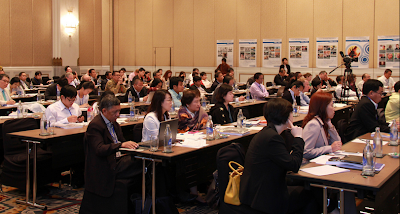 FNF Regional Director for SouthEast and East Asia, Rainer Adam discussed the work of FNF in Asia, then explained that they invited some Thai incumbent government officials, they all declined, so they invited the opposition, former Thai Prime Minister Abhisit Vejajiva. (Photo from left: Rainer, Abhisit, Fred.)

He added that low wages, natural resources extraction can not sustain growth. Needed are more innovations to escape middle income trap. It is not how small or how big the government is, but to properly identify the sectors that government should come and support, and which sectors the government should get out. When markets are distorted, corruption goes up.

Economic freedom can be improved, Abhisit added, by identifying sectors where government can engage and solve inequality. Populist policies and authoritarian government feed each other, but .they can be tackled with democratic and good Governance. Thailand is successful In attracting various car producers and has no national car. An economy improves its competitiveness by gradual opening up.

Dr. Nguyen Quang of the Association of Commerce and Industry in Hanoi, said that Vietnam’s per capita GDP in 1990 was only $98. By 2012 rose to $1,596. Economic freedom means economic development and fast growth. The main contributors to Vietnam’s GDP growth were capital, labor and total factor productivity (TFP), but wrong econ policies were adopted in the last decade. State owned enterprises (SOEs) contribute significantly to GDP growth but reforms are needed, along with reforms in land policy, banking and politics.

Hiroshi Yoshida of the Institute for Public Sector Accounting (IPSA) and the  JTR in Tokyo gave an informative and entertaining presentation. He emphasized that government should never shift the deficit and debt to our children, and taxes should not go to wasteful people in government. The Japanese taxpayers' freedom day is set at May 26th this year.  Japan’s future is disappearing, birthrate is declining and many people think that their individual rights are not infringed yet.

Barun Mitra: of Liberty Institute in Delhi asked about political muddle in the middle, is it an income trap or an opportunity for political entrepreneurs? Democratic politics and competition is subject to similar market competition. Barun added that his view of politics has changed over the past five years. He now believes that competitive democracy has the ability  to mobilize people, that political competition need not result to players coming to blows. Like Pepsi and Coke in fierce competition with each other but not coming to blows.

Barun emphasized that what poor people really need is recognition of their dignity and freedom, not endless subsidy and their dependence on it. Political entrepreneurship has the ability to identify issues that people can associate themselves with and strengthen their belief of themselves.

Feng Xingyuan of Cathay Institute for Public Affairs (CIPA) said that the pronouncement of China President is ‘prosperity and rejuvenation” of the country, but socialist policies prevail in many issues. In an earlier panel, he mentioned that political democracy and competition mentioned by Barun benefits even a one party government like China as it allows factions within the single party to compete for public support.

Wan Saiful Wan Jan of the Institute for Democracy and Economic Affairs (IDEAS) discussed the special case of Malaysia that is about to move to high income economy and is trapped at middle income level. Government intervention has increased, even in retail marketing of garments. There is need to convince the public and politicians to appreciate economic freedom, rule of law, among others, to escape the trap.

Tom Palmer of the Atlas Economic Research Foundation, USA, said that countries and economies don't compete. Companies and people do. Some US states now require hundreds of work licenses, even a license for selling flowers. Such restrictions should be eliminated. Countries with rule of law, more  economic freedom rank high in the EFW index ranking. Middle income trap is a trap caused by lack of rule of law, lack of pub understanding of the value of economic freedom and too many regulations. There is a need to reduce or eliminate many government restrictions, allow people to have new, higher skills and move upward. Investment in human capital will help.

Razeen Sally of the European Center for International Political Economy said that there is a need to remove many restrictions, allow more economic freedom, for economies to develop. Resource rich country but with heavy government can lead to underdevelopment. Within middle income, there are low-middle and high-middle income brackets. It is important to get the basics right, have free trade, invest in education and infrastructures. Abenomics is about loose monetary policy, cheap money to create short term boom. Japan is not getting the basics right.

There is need to liberalize markets for land, labor and capital; have institutional reforms that protect property and instill fiscal responsibility and discipline. One problem, that further economic prosperity leads to more inequality, makes reforms harder to advance due to more opposition. People should realize that is is not about industrial policy, government t financing of science parks, that matter most. Rather, they should focus on institutional reforms, get the basics right.

Peter Wong: of the Lion Rock Institute (LRI) in Hong Kong  said that Hong Kong’s  per capita GDP is not very high compared to Japan and European countries, but people have wide options to purchase many things. There is a need to Limit taxes, encourage entrepreneurship and avoid raising minim wage too high. Some entrepreneurs become successful politicians, but hard to see politicians or bureaucrats become successful businessmen/women.

Sethaput Suthiwart-Narueput of Thailand Future Foundation emphasized the important role of innovation and research and development in helping economies to move upwards economically. One solution to bad governance is to have lesser and smaller government, move to privatization of certain government corporations and functions.

After the panel, there was a world café introduced by FNF Regional Director for South Asia, Siegfred Herzog. Participants discuss for about 15 minutes a specific topic, then they move to another table for 15 minutes for another topic; there were four tables with their respective facilitator and rapporteur. The theme was ASEAN Economic Community and the middle income trap. It was a fast paced activity. The four rapporteurs reported on stage the result of the discussions in each table. 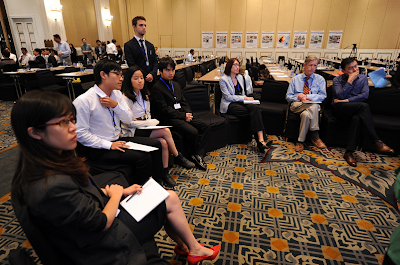 A closing message was given by Prof Wantanee Wasikasin, Dean at Thammasat University. She expressed gratitude for the participation of local and international delegates and tackle the issues of middle income trap and economic freedom.

Rainer Adam came up stage for the second time and announced that he is leaving the region soon as he is moving to Eastern Europe to be the Regional Director there by middle of next year. Thus, this is his last EFN conference. He gave a spontaneous but somehow emotional speech. A few participants were teary eyed listening to him.

Siegfried Herzog acknowledged that he will take the place of Rainer Adam next year and gave a short closing message. 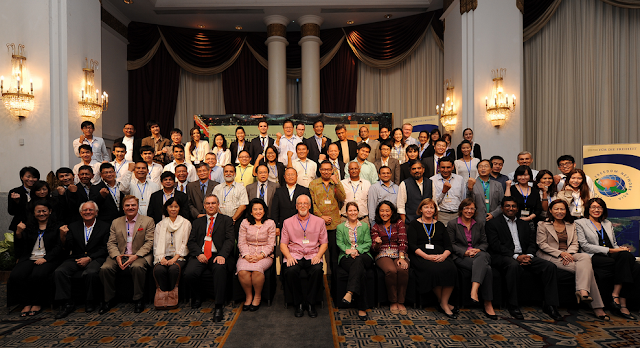 A first time participant to the EFN conference, Prof. Roman Dannug of De La Salle University in the Philippines was greatly impressed by the two-days event, said that aside from the knowledge imparted, the conference has strengthened persona, professional, and institutional linkages of free marketeers that may result in more sustained efforts to influence the content and conduct of free market societies and democratic governance in Asia.

Kudos to the hard working staff of FNF regional office for pulling that important and biggest annual event of free marketers in Asia.